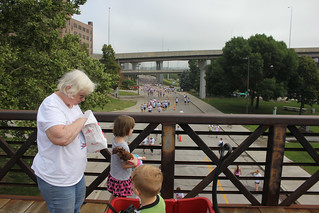 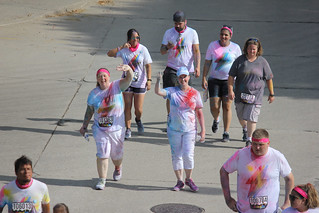 The summer fun continues, as orange lilies and hostas bloom in our yards and the kids reenact the Memorial Park concert in our living room. Hannah also lost another tooth, making it increasingly difficult to eat an apple, among other things.

On Saturday, Vivian participated in another 5K, this time the Color Run through downtown Omaha. I dropped by to surprise her with Grammy and the kids over the bridge to Heartland of America Park. There were quite a few painted-up (and tutu-wearing) participants in the parade, but we were eventually able to spot Vivian and Tamra trotting along with the lot of them. I took Hannah and Aaron down to the street level for a few high-fives before they continued on, and Hannah got in some extra puddle-jumping for good measure. 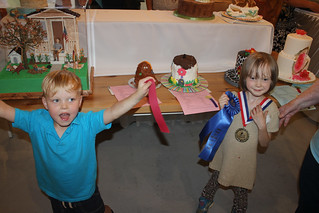 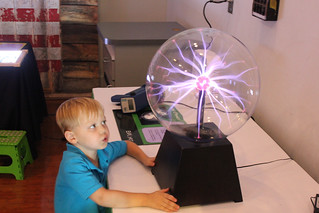 Then on Sunday, we spent the afternoon at the Douglas County Fair, an event that was inexplicably held at a few empty shops at the Village Point Mall. Our primary reason for going was to see Hannah and Aaron win some awards for the little cakes they make for the River City Confectioner’s Association cake contest. There were quite a few fancy entries once again this year, but Hannah and Aaron still managed to walk away with ribbons. Hannah got both a blue ribbon and a medal for best in show for her House Cake in the Wee Folk category, which was particularly nice.

There were other fun events going on at the “fair,” including a science exhibit with a variety of neat toys, as well as a Bubble Show, where both Aaron and Hannah got to be inside a big bubble for just a moment.

We’re closing in on another milestone this week as Vivian and I celebrate ten years of marriage together. More on that in a bit!