The Fourth of July is almost here! Yes, in the dead-heat of summer, we’ve got lots of fun things happening in Omaha to keep us busy, especially when we’re outside in the steaming hot weather (rather than inside playing with our electronic toys). 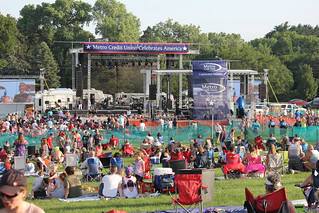 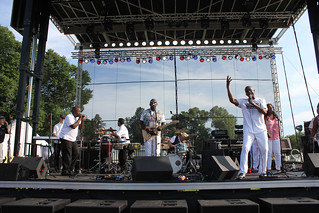 First up is one of my favorite events of the year, the free concert at Memorial Park! This year it was a muggy 95 degrees in Omaha, but that didn’t stop us from trekking to our usual spot on the hill to enjoy some great music. Local favorite The Confidentials opened up the event as concert-goers found their seats and played catch out on the green. Dean and Sarah joined us on our blanket as the sun set, but most of our usual friends sat the concert out because of the heat. Our kids seemed unphased by the heat and enjoyed running around playing with a football and a bubble gun, which was fine by us. 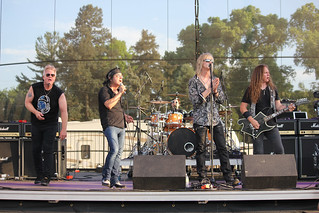 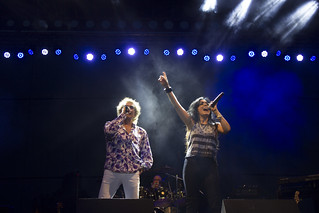 Survivor — who was supposed to open for the headliner at this year’s concert — bowed out at the last minute for unknown reasons. Fortunately, David Victor and his band “Bostyx” stepped in to play a variety of cover songs from both Boston and Styx. They proved to be a tremendous crowd-pleaser, and many concert-goers thought they were the highlight of the evening.

Of course, the highlight for me was Starship — a band I’d listened to growing up in the 80s and for many years since. Mickey Thomas was the only member still with the band since it had “Jefferson” in its name, but the songs were still just as good as I remembered. This year was particularly special, because I not only got to see the event from the VIP pen for the first time, but I even got to go backstage to meet-and-greet the band! (It definitely pays to have connections with Metro Credit Union, who are the new sponsors of this annual event.)

The concert concluded with a lovely fireworks show, which we got to watch with the kids before making our way back to the car. It was a long, fun night, but it was quite nice to get back home to enjoy air conditioning once it was done. 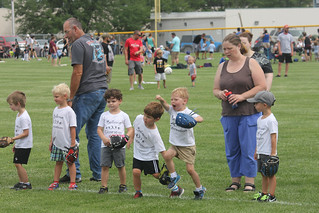 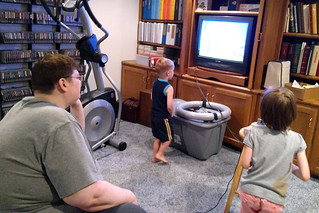 Of course, we got right back up the next day to take Aaron for his last tee-ball practice at Baldwin Field. He’s gotten much better at hitting the ball, and just being able to participate in a team and take direction from a coach has been a good, growing-up experience for our four-year-old.

Afterward, we dropped by grandma and grandpa’s house to let the kids play as I did some laundry. Apparently our washer’s broken again, but I’m hoping a new lid switch will get it working again. In the meantime, Uncle Jonny introduced Hannah to Super Mario World and a British comedian named Peter Serafinowicz. 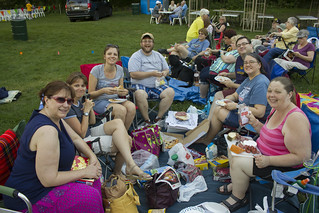 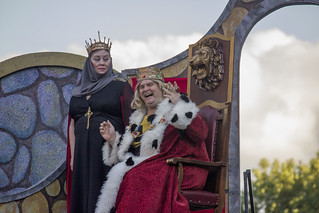 We had planned for an evening with Shakespeare on the Green Saturday night, but it was pretty clear that thunderstorms were in the forecast, so we bailed on the event long before it was officially cancelled. I was up bright and early the next day to claim our favorite spot for Sunday night’s show. We dropped by Thanksgiving Lutheran for their Sunday Service and got to see highlights from Hannah’s week at their VBS program.

Then that evening, Grammy watched the kids as Vivian and I joined our mutual friends Phil and Jen, Lisa, Jessica, Jenny and Kody on our blanket to see King John. Phil and Jen brought some Papa Reno goodness with them, and Vivian had her usual assortment of cheese and salami. We saw some kids from Camp Shakespeare perform an abbreviated version of The Tempest before the show got underway. This year, King John was dine with a bit of a “punk” theme in the music and some of the costumes, but it was mostly played straight with only a little deviation from the script before the end of the show.

ostly, however, we enjoyed a rain-free performance with temperatures in the 70s. Now THAT was worth a standing ovation. Next stop: Independence Day!

Knee-deep in the hoopa!