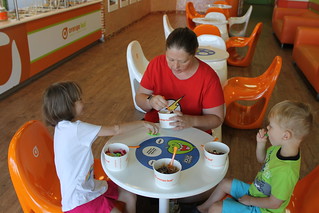 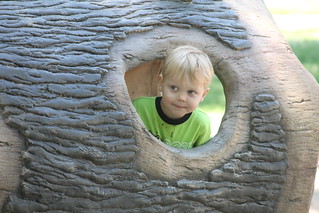 If you hadn’t noticed, it’s summer, and among other things, that means it’s stinking hot every single day. Last Friday, we dropped by Orange Leaf to give the kids their first taste of frozen yogurt (with an assortment of sugary toppings) to cool off before taking them to the nice and shady Elmwood Park to play at lunchtime.

Elmwood Park is over 100 years old, and even though it’s been updated with new playground equipment, you can tell how old the park is from the giant trees lining the walkways. The play area was also littered with sandbox toys that Hannah and Aaron made use of, which were apparently put there by the park specifically for kids to play with 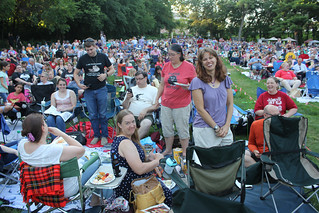 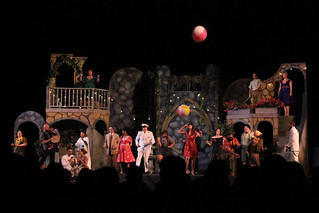 Then on Saturday, because once is never enough, we returned to Shakespeare on the Green to see their final performance of Much Ado About Nothing. It was a beautifully cool evening, so there was naturally a record crowd there to see the show with us. Fortunately, I was up bright and early to claim a spot right up front. Our usual assortment of friends dropped by to share the blanket with us, and they also brought their usual assortment of tasty, pre-show foods — including pupusas from El Chalateco and pesto bread from Lydia (which Vivian was happy to see).

The wandering minstrels came by to sing by our blanket for the show started around eight. The play was done straight, though the actors had Navy uniforms and costumes reminiscent of a 1950s beach party, which gave the production a bit of a retro-modern feel. They also had beach balls that they batted into the crowd at the end of the show. I had the opportunity to thank a few of the actors for their performances before we left — getting to see them playing various parts year after year makes it feel like we’re a part of their family.