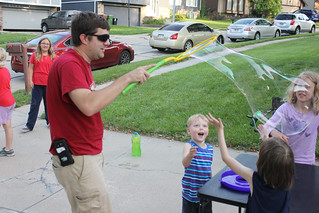 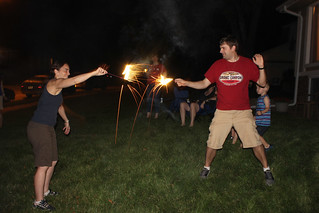 It’s been an interested week — divided in the middle with a busy, hot and steamy Fourth of July. We kicked things off on Tuesday night with a long-overdue Fourth of July Party at our friend Jon’s house. Jon grilled up some burgers and brats as we made some big bubbles out on the driveway with the kids.

Then once it was dark enough, we broke out the sparklers and artillery shells and lit up the sky for a couple of hours. It was a steamy, hot evening, and I found myself (and Aaron) retreating inside to air conditioning multiple times throughout the night. Aaron finally crashed on Jon’s armchair around then and we decided to call it a night. 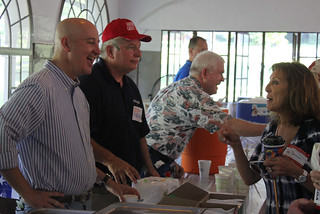 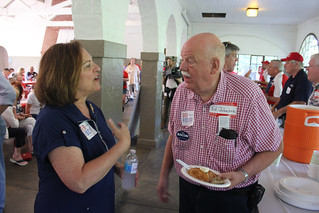 Of course, I was up bright and early the next morning to go to a Republican breakfast with my dad. We stopped by Ralston on the way I could claim a spot for the parade later that day, and then we headed on down to Elmwood Park to have some pancakes and sausage. Servings things up were Gov. Ricketts, Senator Fischer, Congressman Bacon, and Mayor Stothert, among a handful of other local politicians. Fischer in particular worked the crowd and had a good conversation or two with my dad about Donald Trump.

There were also a few other familiar faces, including Christopher Zhen, who I’d met multiple times in the 2016 campaign election (who now works at the RNC), and my former Congressman Lee Terry, who’s slimmed down and stopped by to pay his old district a visit. Dad and I had our fill of pancakes while talking politics with a few other attendees before heading on out, though we did also swing by the Car Show to see a rusted old Studebaker among the shinier Corvettes. 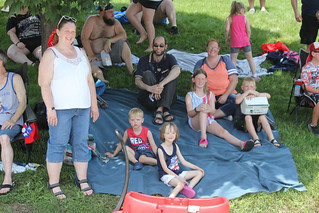 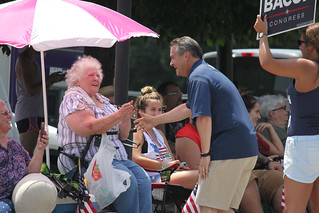 At one o’clock that afternoon came the Independence Day Parade in Ralston. Lisa and Marcus (now Father Knecht) and some of his family joined us on our blanket. The nation’s colors and members of the military started off the parade, followed by Shriners with their clowns and clown cars, some bumper cars from Fun Plex, and a motorcycle happily burning rubber for our amusement. There were also members of the Ralston Community Playhouse and troops from Star Wars (as usual). We even got some fun new headgear and flags from a few passing floats.

We also saw several of the same folks I’d met that morning, including Bacon, Stothert, Fishcer, Ricketts, and even Chris. Bacon even had a live pig named Betty in the parade with him. There were left-wing candidates in the parade as well, of course — Kara Eastman and Bob Krist both making an appearance. The parade seemed much shorter than in years’ past, but I was especially glad to be “made in the shade” with the spot I’d staked out in the morning. Hopefully we’ll get it again next year. 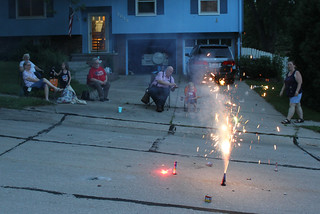 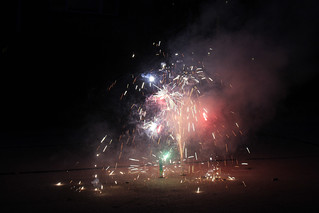 Then that evening, after we’d sufficiently cooled down, we had both sets of grandparents over to set off a few more fireworks in the street with the kids. Hannah and Aaron brought out a few toys to watch, and we used up most of our fountains, snaps, and artillery shells as a storm quickly moved in around ten. The wind kicked up in a major way, and it was bizarre to see its effects on fireworks, making them drift off in odd directions after exploding in the air.

So was all that just one day? Happy Fourth of July, everyone! And keep cool — there’s still a lot more summer left to use up.