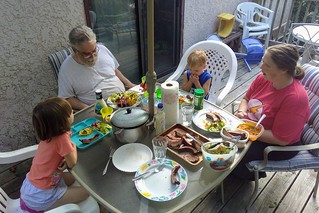 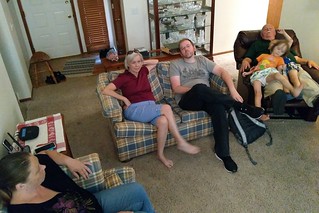 Vivian’s mom is spending a few weeks in California, so we’ve been keeping tabs on her dad while she’s away — mowing the lawn, taking out the trash, and eating all of his ribs out on the back porch on Tuesday (AKA avocado day).

My Aunt Nancy and Uncle Andy have also been making their way across the country, stopping by to visit briefly on Wednesday last week. Both Nathan and Jonathan were there to visit as we brought the kids band then attempted to play some Word with Friends. 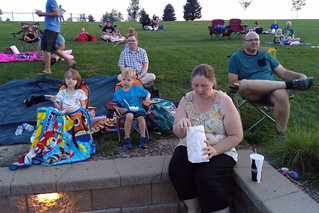 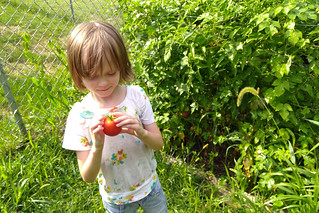 The Dog Days of Summer have been relatively cool, making for nice weather to have a Derp Burger with fresh tomatoes picked from our garden (and drink from the garden hose). I’ve also been riding my bike to work fairly regularly, which makes for a nice bit of exercise in the countryside (when it’s not raining).

On Friday night, we made one more stop at the SumTur to watch Early Man with Mark and Jon. It was a fairly cute Nick Park film, and it was nice to get one more outdoor film in before the end of the season. The next day, I saw the new Dinesh D’Souza movie, Death of a Nation, with my folks, and then we went to Arby’s with Jonathan afterward. That latter movie wasn’t nearly as much fun to watch. 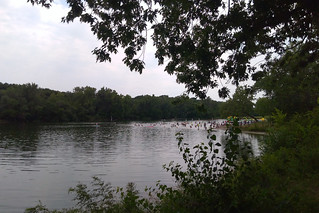 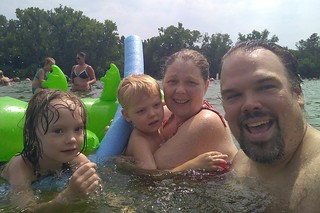 Sunday was nice and warm, so we took the kids down to Louisville Lake for a long-overdue family swim. Hannah and Aaron seemed much more enthusiastic about getting into the water this time around, though more with the pool noodles and not so much our alligator (which was literally deflating). There was also a giant, inflatable obstacle course next door, but it seemed a bit intimidating for the kids (and rather expensive to play on), so Hannah and Aaron got in some quality tree-climbing instead.

Then that evening: bruschetta with tomatoes and basil from our garden and fresh pressed garlic. Oh, boy. 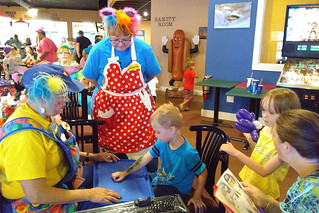 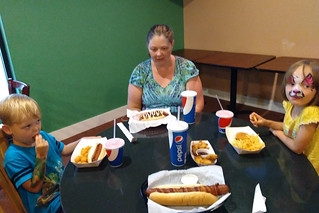 Then on Monday we took the kids down to B&B Classic Dogs, a hot dog restaurant and arcade that we’d wanted to visit for a while. On this particular day, a handful of the Faith Christian Clowns were on hand to made balloon animals for the kids and do some face-painting (or arm-painting, in Aaron’s case) in-between eating hot dogs and playing ski-ball. It felt quite a bit like a miniature Chuck-E-Cheese and took me back to my childhood for a bit. Of course after having a bacon-wrapped foot-long and some deep-fried appetizers, I’m going to need to ride my bike to work for another week to pay for it.

In other news: Johnny Marzetti with Pop-Pop tonight. Yum.