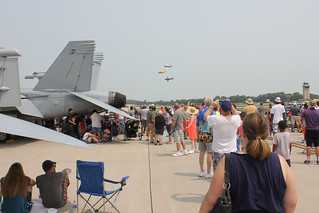 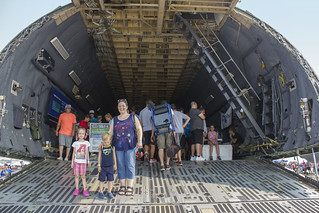 For the first time in a decade, Vivian and I managed to make it down to Offutt AFB to check out their annual air show. We’ve been able to catch glimpses of it from our back porch in years past, but this time around we got to see it up close and personal — and we brought the kids. The kids got their first-ever bus ride with us down to the base, and then they got to take a peek inside some historic jets and walk through some much larger ones together (along with a couple thousand other people). We even bumped into R2-D2 and other members of the 501st Legion’s Central Garrison on the tarmac.

Around noon, we got some shaved ice and made our way to the grassy strip near the runway to see the air show. It started with some parachuters coming down with an American Flag for the national anthem. Then we got to see some demonstrations of aircraft both big and small (with some clowning around with the Jelly Belly plane). There were also some historic planes flying in formation together and one used in the Vietnam War.

We stayed for a couple hours before eventually calling it quits and heading home, missing out on some of the more impressive aircraft, but also skipping the long line to the bus we would have endured had we waited until the end. We did get to see some of the aircraft from our own front porch later on, and I saw a stealth bomber in the drive-thru at Arby’s. It’s the sort of thing you can expect every August if you live in Bellevue. 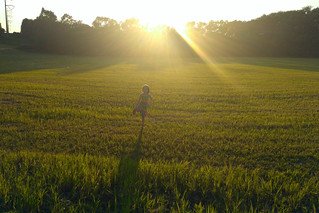 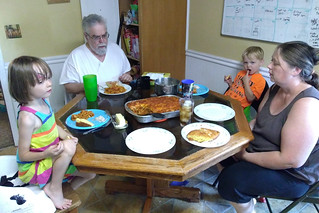 It’s otherwise been a fairly quiet week getting ready for school to start and dealing with a few summer colds. Hannah’s getting ready for another year of homeschooling with Classical Conversations, and Aaron’s getting set for a year of preschool at Spring Lake Elementary in Omaha.

In the meantime, we’re enjoying a few lovely sunny evening walks together. We also had Pop-Pop over for Johnny Marzetti one night. Grammy should be returning from her month-long visit to California in the meantime.