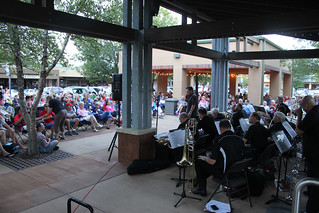 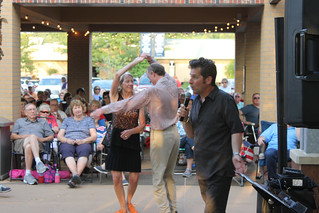 I had a bit more birthday fun in store on Friday last week as we kicked off the Labor Day Weekend. I usually drop by the Eagle’s Lodge for a birthday jam around my birthday, but this Friday the Gooch Big Band was performing down at Rockbrook Village, so I decided to drop by to enjoy some good swing music instead! Some of our regular Jitterbug friends were there, namely Dan, Sara Pirtle, and Connie. We danced in front of the stage as the Gooch lead the band through several of my favorite classic swing tunes, including a few originals. The show only lasted for about an hour, but I danced nearly every song, so it was worth every second.

Then afterward, we dropped by Fazoli’s with Dan to reminisce about old times over plates of spaghetti and lasagna. I always love hearing Dan’s old stories, including the time he scared off Debbie Reynolds by asking her to dance. (Yes, that Debbie Reynolds.) 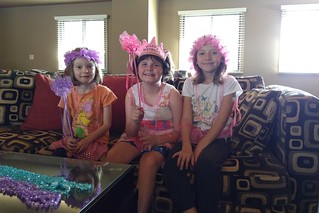 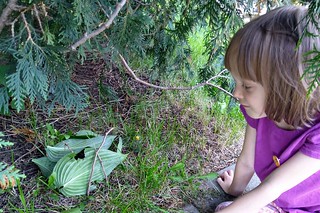 We had a lovely, quiet Labor Day Weekend for the most part. Hannah got to attend a fairy birthday party with her old friend Lily down the street. Then when she returned to our house, she decided to make a leafy house for a stray dragonfly we found underneath a tree in our yard.

I got to have a little quality time with Aaron in the meantime, and I wound up making waffles multiple times for the kids using the tiny waffle iron I got for my birthday. I also introduced Hannah to Earthbound Zero, which might wind up helping her with her reading as she navigates the controls. 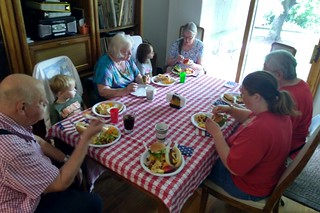 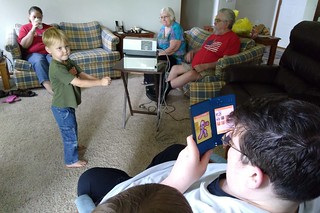 Then on Monday, we had a nice relaxing Labor Day. My dad smoked some angus burgers and brats from the Stoysich House of Sausage at his house, and we came over with some cowboy caviar and chips to have for lunch. Jack and Donna also came, as did Uncles Nathan and Jonathan.

After lunch, dad showed a bunch of embarrassing slides from our childhood, and then Uncle Jonny introduced Hannah and Aaron to Photo Dojo, a Gameboy fighting game where they get dropped into the action via the built-in digital camera. Uncle Jonny showed this to Vivian and me back to 2010, but it was even more fun watching our kids get into action so many years later.

Happy Labor Day, everybody. I hope you didn’t work too hard.