Well, we managed to get in at least one camping trip this season, taking in a brief, overnight stay up at Fremont Lakes. It was a chilly weekend for the most part, and our stay was interrupted late Sunday morning with some rain, but we still got to enjoy the outdoors together. 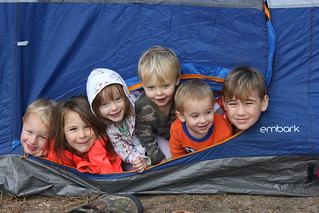 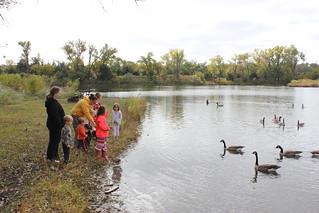 We packed up and drove on Saturday morning and pitched our tent at the campsite with Lexi and her kids, and then we got a fire going and brought our tea kettle along to boil some water for hot chocolate. We had a gaggle of geese visiting us throughout our stay, so we got some bread for the kids to toss to them and make friends. Hannah also found a new “playground” with a fallen tree to walk on, and the boys found a picnic table for some dancing. 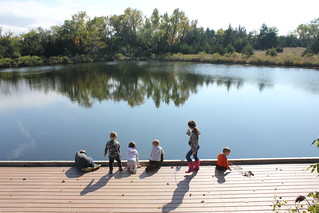 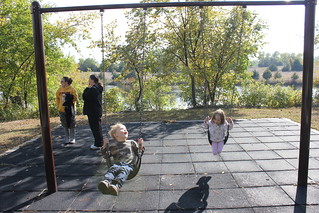 The sun came out a little late, so we took a brisk walk up the street to the little playground. The kids found a few mountains and rocks to climb on along the way. We were also surrounded by lakes at every turn around the park, which would have made for nice fishing if we’d brought any equipment. They made for some lovely picture later on as the sun went down, of course. 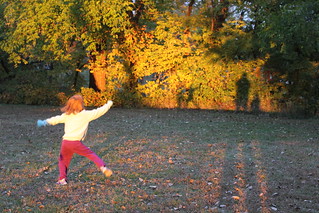 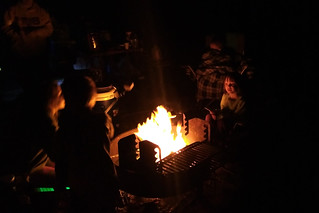 We got the fire going again later as Lexi made some soup and macaroni and cheese for dinner. The kids had some fun dancing to their shadows as the sun set, and then we tried making a batch of actual cookies on the fire with a cast-iron cookie sheet (which became a big, gooey mess). When it got dark, we broke out the skewers to roast jumbo-sized marshmallows on the fire for s’mores. Nate came by to join us after a while, and then we scooted the kids off to bed before it got too cold. 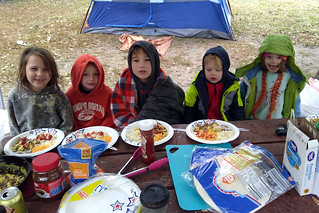 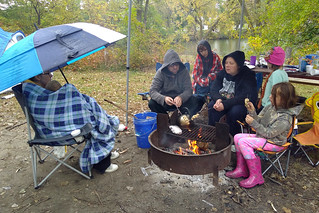 It was around 40 degrees throughout the night, and I don’t think I got any sleep between the chilly air and the occasion train rolling by. I got up around seven to make coffee, and Vivian made sausage, eggs, and hash browns for on one of her skillets for breakfast burritos for breakast. Lexi read a VeggieTales book to the kids in lieu of an actual church service, and then we started to scramble as the rain rolled in. It started as a sprinkle and then got stronger as we put a canopy over our picnic table and huddled under umbrellas. The fire persisted, however, and Vivian cooked some cinnamon rolls over the open flame as we did our best to stay dry.

The eventually headed on home to dry off and warm up after a chilly camping weekend, but we still had a fun time. It was certainly nice not to have to worry about bugs for a chance. Maybe next time we’ll try it again in the spring.