I’ve just returned from a week-long vacation that I spent entirely in the Omaha area, catching up on things around house and spending some quality time with the family. It’s the first time I’ve had a full week off work since our trip to California in 2012, and the first time I can remember with that much free time on my hands. It was lovely. 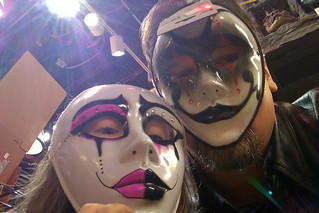 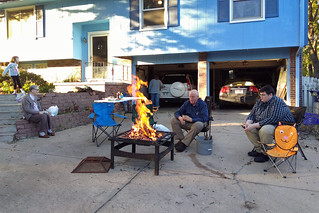 On Sunday, we kicked things off doing some costume shopping down at Mangelsen’s, where we tried out various masks and accessories before eventually getting Aaron and Hannah to decide on being Batman and Poppy (from Trolls) respectively for Halloween.

Then that evening, I managed to literally burn through all the wood we’d accumulated from fallen branches over the past year or so in a fire pit. I invited my parents over and we roasted hot dogs over the open flame, which worked out amazingly well. The weather was downright gorgeous most of the week with highs in the 60s or so, which was just about perfect every single day. 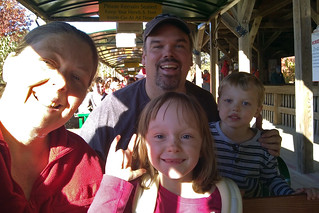 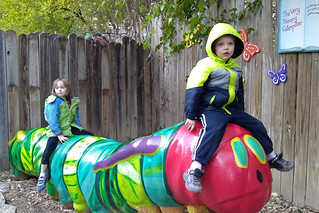 I spent nearly all day cleaning house and doing laundry as Vivian was out doing school stuff with the kids. Then on Tuesday, we had our annual trip to Vala’s. Tuesday was just about the perfect day to go — we got the home school discount, which included free pumpkins and a train ride, and the weather was beautiful all day long. We got Hannah and Aaron measured up before hitting the pig races and getting our family photos taken behind cut-out characters (and on the big chair). Hannah’s favorite attractions were the haunted houses and the pumpkin mine, so we wound up wandering through those multiple times. We grabbed some apple donuts for a snack and spent extra time in the school house pretending to teach the kids. We also spent some extra time at the Pirate Cove dancing to music by the Skeleton Band.

The fall colors were glowing everywhere, and I tried multiple times to get a decent autumnal photo of Vivian and the kids, but they were too excited to sit still for long. We got a wagon ride and a ride on the train and stopped to see an animatronic show or two on the way between exhibits. We also paid a visit to Bunnyville and saw Xander the Dragon as the suns tarted going down. Storybook Village had a few new items, such as the Hungry Catterpillor (sic) and a sword-in-a-stone. We ended the day taking Aaron on the big slide (where his reaction was “I’m scared of that … I wanna go again) and then the pie barn for “dinner.” We grabbed a few pumpkins on the way out before heading for home, where we all pretty much crashed afterward. 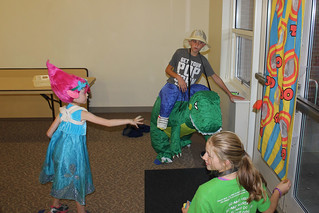 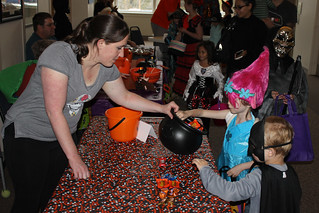 Hannah and Aaron got to try out their costumes for the first time at First Presbyterian for some trick-or-treating on Wednesday Night. They got their fill of candy and played a handful of games along with a few of their little friends.

The next day, I went out to lunch with my parents to a place in downtown Papillion called “Brownie’s.” They had $8.99 rib-eyes (thinly cut) and I got to catch up with them a bit without having to wrangle two kids wreaking havoc at the same time, which was nice. 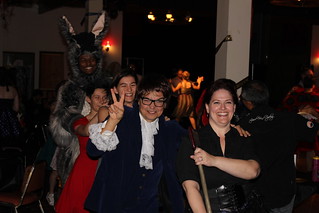 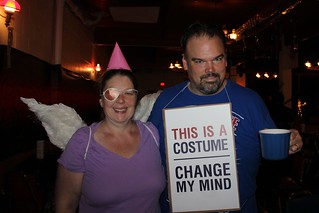 On Friday night, Vivian and I went to the Omaha Jitterbugs’ Halloween Dance together, the first time we’d been to the Eagle’s Lodge since the last Halloween dance. I went as a Steven Crowder “Change my Mind” meme, complete with mug, which got me into the finalists’ row during the costume contest. Vivian went as a “one-eyed, one-horned, flying purple people eater,” a last minute thing thrown together once she and I realized we had all the components at home.

It felt strange to be back dancing with the Jitterbugs after being away so long, partly because there were so many new people, and also because I’m darn OLD and dancing all night long isn’t as easy as it was a decade ago. We still had a fun time, and we even grabbed some donuts from the Donut Stop, which will be sadly closing its doors forever on Halloween. 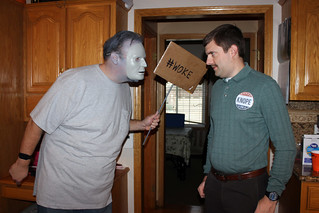 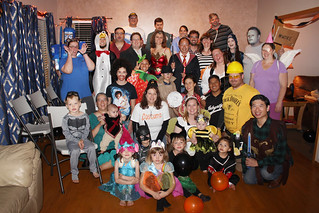 We had a lovely lazy Saturday for most of the day. Then that evening we went to Jenny’s annual birthday/costume/Halloween party up in northwest Omaha at Dean and Sarah’s house. Our kids got to bounce around for a couple hours (in costume) with a handful of our friends’ kids as we had some cake and played a bit with our grown-up friends. Takashi led us all in Thriller, of course, and we also got our group picture before people started to leave.

I came in my second costume of the night, an “NPC,” which has become something of a political meme online. Nobody seemed to get it, which was mostly fine with me. I may reuse the mask to be Michael Myers from “Halloween” instead, which is what most people thought I was anyway. 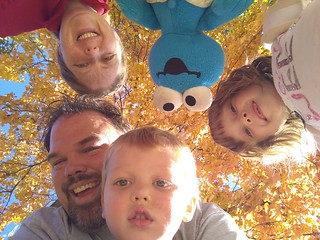 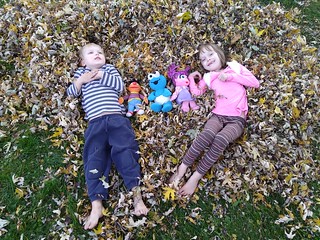 It was a great week overall, helped in my doubt by the lovely weather and fall colors we got to enjoy. We took a walk or two around the neighborhood with the kids just to enjoy them (and see the Pumpkin Man).

We also raked a bit of leaves in our yard on Sunday so Hannah and Aaron could play in them (along with Hannah’s family of toys) before it got too cold. Then we watched the sun set on my last day of vacation before Vivian fried up a whiskey-marinated sirloin for dinner, which was quite tasty.

It was a good week, and I may wind up doing something like it again before long, as I have a couple hundred hours of vacation time left to use up (eventually.)