President Trump paid a visit to Council Bluffs on Tuesday this week, and I was able to attend his rally with Vivian for the first time ever. It was quite a memorable experience to say the least. 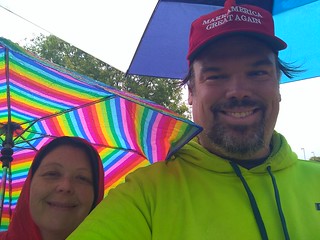 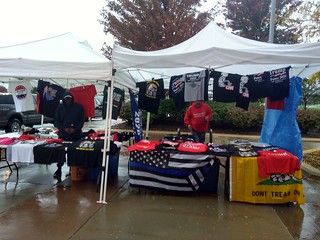 I’d seen Mr. Trump twice before as a candidate, but as a sitting President he seemed to draw a remarkably larger crowd. People actually camped overnight to be the first in line to see him, and thousands of others waited standing in the rain all day long before the doors opened.

Vivian and I arrived around four and were among the last to get inside — in a line that stretched over a mile. We had a good time chatting with others in line and looking at the vendors selling bootleg Trump merchandise along the sidewalk along the way. 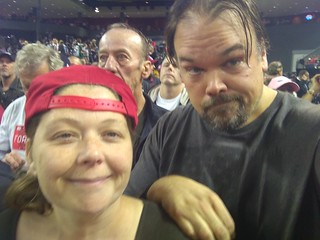 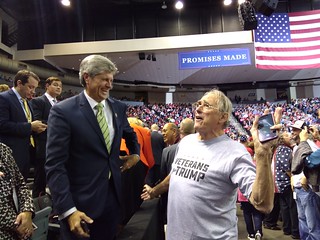 After about two hours shuffling through near-constant rain, we made it to the entrance, where we were wanded by Secret Service and then ushered into the arena. Vivian and I were among the last to get inside, and we were fortunate — at least a thousand people had to watch from outside on a giant screen.

And wow — there’s nothing quite as electrifying as walking into a Trump Rally. Seven thousand people were packed into the room, and Vivian and I were among the last to arrive. The MAGA faithful were holding signs and doing the “wave” as music pounded overhead, and I bumped into multiple VIPs on the way inside — Gov. Ricketts and Congressmen Fortenberry, Bacon, and King. 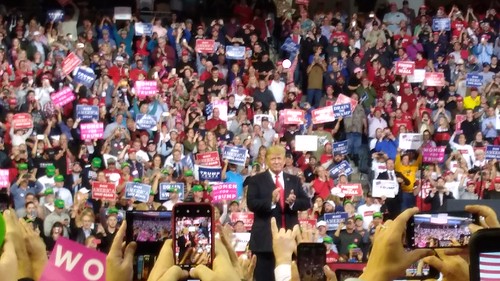 Then, a little after 6:30, the music died down and the 45th President of the United States stepped into the arena to Lee Greenwood’s Proud to be an American. The crowd was very enthusiastic, particularly those of us from Nebraska, who announced our presence with a cheer so loud that the President had to take a spontaneous poll to see “who the hell I’m talking to.” I guess it was a surprise that so many of us would cross the river into Council Bluffs to see the POTUS. The speech itself was largely standard for a Trump rally — tallying off a number of the administrations’ successes, with a brief highlight on “year-round E15.” Iowa Gov. Kim Reynolds and Congressman Running for Iowa’s third district. also got to say a few words, and Trump also pointed out the number of VIPs from Nebraska in the audience.

The event wrapped up fairly quickly afterward, as Vivian and I made our escape and saw only a small handful of protesters (who were kept off of MAC property by police) on the way back to our car. The only downer from the whole evening was losing my blue umbrella. We weren’t allowed to bring umbrellas into the Mid-America Center, so we left ours outside in the hopes of finding them when we left. Vivian found hers, but mine was missing, likely taken by someone else by mistake. Maybe I should have left mine in a tree, as many others did.

Overall, however, it was a great event — particularly because Vivian actually came along with me this time. It was the first time she’d seen Trump or any sitting President, but it was bigger than any political event I’d ever been to before — and that includes when President Obama came to town.