It’s been a busy, crazy couple of weeks preparing for both a birthday for Hannah, Thanksgiving with the family, and a handful of celebrations to kick off a long Christmas season. 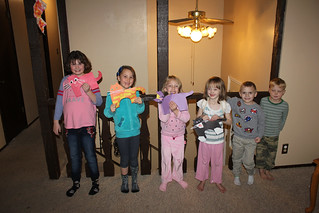 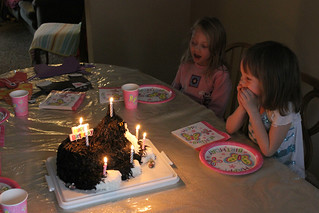 The fun started last weekend as Hannah had a kitty cat themed birthday party with a handful of her little friends at our house. Grammy made a Zoey birthday cake, which was both adorable and frightening, particularly when Vivian decapitated it to give Hannah the first piece. Lily (and Jonah), Nicholette, and Sammy came over to share in the cake and make paper cut-out cats with Hannah. Hannah also got a bunch of presents, which included Play-Dough and a sequined toy that was particularly fun for Hannah to “draw” on. 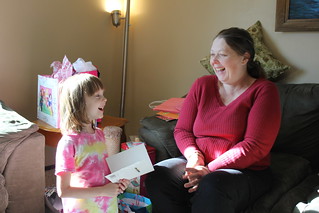 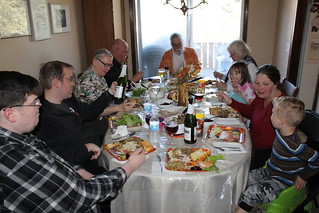 Thanksgiving the following week landed right on Hannah’s birthday, so we had to juggle both roasting a turkey for our Thanksgiving Dinner and hosting a family birthday party with Hannah. Grammy brought a new, “little Zoey” cake for Hannah, and she got to open some more presents in the morning, which included a Knuffle Bunny and her long-expected “Hannah Doll” (an American Girl actually named Willa).

All four grandparents dropped by, along with both Uncle Jonny and Nathan. Grandma read the kids a story as Jack and Vivian got Thanksgiving Dinner ready. Then around one, we sat down for turkey, stuffing, potatoes, green bean casserole, Taber salad, and also pie for dessert. Hannah also got to eat her cake, of course, blowing out the candles before going “head first” into a new sugar rush. 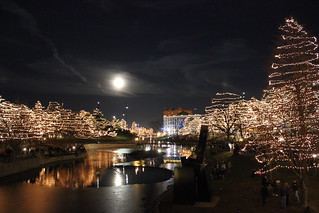 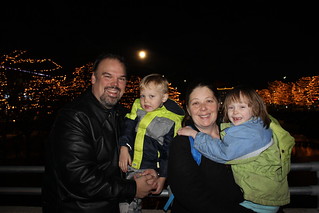 That evening, we took the kids downtown to see the Gene Leahy Mall lit up in Christmas splendor for the last time before its multi-year demolition. It had warmed up to a lovely 50 degrees, but there was still enough ice left on the waterfront for some geese to walk on (“Just like Jesus,” said Hannah). We got a glimpse of Christmas Island and saw a man playing Christmas songs on a legit hurdy-gurdy near 12th and Farnam. Aaron (and mommy) tried out the slides before we headed up to 14th Street for the lights to turn on.

Some young kids sang some Christmas songs on a bandstand in front of the library before the emcee from 104.5 rattled off an endless list of sponsors. Then Mayor Jean took the stage to lead the countdown for the mall to light up. It was bittersweet to see the beautiful lights with the kids for the first — and last — time together. We stuck around just long enough to get a photo in front of them before hurrying on home to bed. 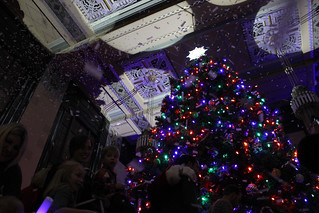 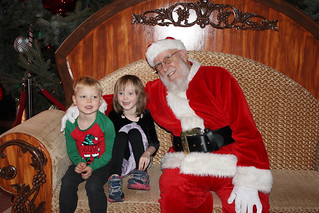 On Black Friday, I had an early-morning breakfast at the 11-Worth Cafe with Uncle Jonny and my folks, starting the day with hash browns and sausage biscuits smothered with sausage gravy (AKA the “General Lee.”) Afterward, Vivian and I did just a bit of Black Friday shopping, specifically enough to confirm everything advertised had been sold out on Thursday.

Around four, we dropped by the Durham Museum to have Christmas at Union Station. The kids got to meet Santa and decorate cookies with Grammy and the River City Confectioners Association. They had some reindeer crafts, but we spent most of our time on a reindeer scavenger hunt downstairs, finding nine cut-out reindeer in order to claim a light-up glow stick upstairs as a prize. There were some toy trains (and a piano) that Aaron enjoyed playing with, and Hannah got to run through the various train exhibits and vintage passenger cars on display. We also saw the model of the 1898 World’s Fair in Omaha, a building of which one other girl said looked like “Donald Trump’s House.”

Later on upstairs, we got front-row seats for the tree-lighting, as the only spot to sit was right in front of the stage. Michael Lyon was back to sing some Christmas songs (after a recent bout with throat cancer of all things) before Mayor Jean and a handful of VIPs took the stage to lead the countdown. I let Hannah handle the video this year as I snapped some photos, and then we managed to join everyone else in the crowd in getting a selfie in front of the tree and playing in the paper snowflakes to kick off the Christmas season. 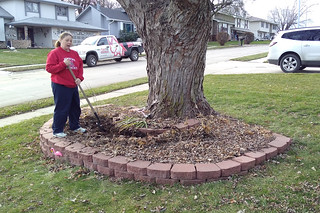 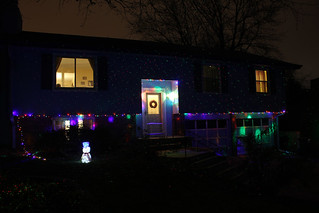 We had some lovely weather on Saturday, which I spent putting up our Christmas decorations and taking the kids on one last wagon ride to my parents’ house for a visit. Our neighbor Betty also gave us some kolaches, and Vivian planted our tulip bulbs while we still had one last warm day before winter.

On Sunday, we got a dusting of snow that mostly just left the streets wet and slushy (before they turned to ice). It was fun to hear Aaron exclaim with a gasp, “It’s Christmas!” as he looked out the window. We were still able to go to church and then drop by Sam’s Club afterward for cheese and ice melt (among other things). We spent the rest of the day indoors catching up before our four-day weekend came to a close.

One interesting thing I learned this week was that when Hannah’s birthday falls on Thanksgiving, what follows is the longest Christmas Season possible on the calendar — 33 full days. I’m glad we were able to start them off right!