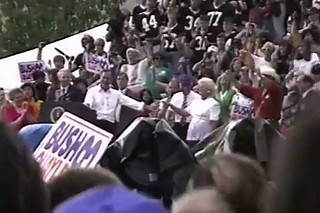 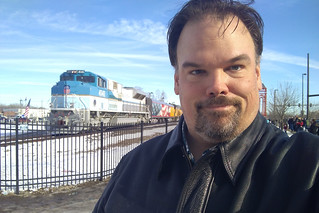 A few weeks ago, America said goodbye to the 41st President of the United States, George H.W. Bush. It was a relatively long goodbye, as even when the funeral was over the former President’s funeral train, the Union Pacific 4141, came to Omaha to be on display for a couple days. I was one of the many who stopped by to pay our respects last Wednesday up until the moment the whistle blew and pulled away. I was impressed with how many people came to pay their respects — people of all stripes, including one black man with an Obama hat (who got his photo taken in front of the train). It made me feel just a little better about a country that too often seems so divided.

Not long before his passing, I uncovered an old video my dad took when President Bush when he came to campaign at the Riverchase Galleria in Birmingham, Alabama. I was only 14 at the time but still vividly remember that day — particularly the long security lines and the rain that drenched everyone before the President spoke. Lee Greenwood himself was there to play music beforehand, and First Lady Barbara Bush was on stage as well. I even got a glimpse of Mrs. Bush through the window of the motorcade as it came by afterward. What I didn’t remember until I found this video, however, was that my dad had recorded highlights of the whole day, which you can see on YouTube. 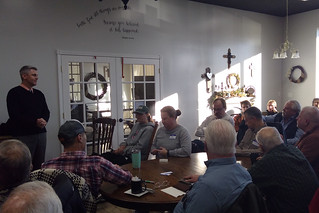 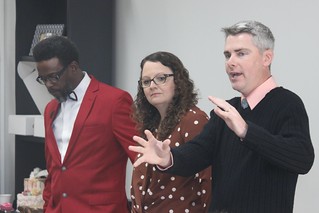 On Saturday morning, I got up early to attend an event hosted by the Free Speech Society down at the Omaha Bakery. There I got to watch a talk with William King, Kara Eastman, and Scott Voorhees on the Obama Legacy, along with a packed room of thirty or so other people. Eastman and Voorhees were predictably left-wing and conservative of course, while King seemed to straddle the line as a centrist, having supported Obama but just recently emceed Pete Ricketts’ election night victory party. The crowd as well had a healthy mix of left-wing people and staunch conservatives in the crowd talking about everything from Obamacare to climate change, to Supreme Court nominations.

While the discussion was lively, everyone was civil and nobody made any personal attacks, which was a refreshing change from online discussions. The best part, of course, came from a back-and-forth with Scott Voorhees and Tom Becka, with Scott remarking “I miss this” in the midst of it. I think what made the biggest difference was that everyone was required to listen to others as they waited their turn to speak, and that’s something that’s missing from our current conversation. 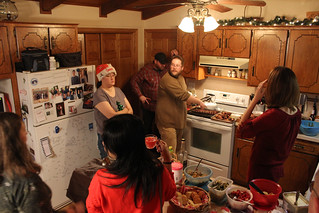 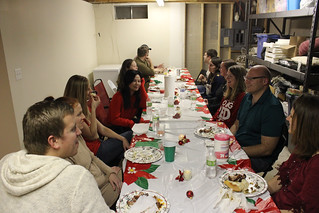 That evening, Grammy watched the kids as we headed up to Jenny and Kody’s annual Christmas house party at their place up in Bennington. About a dozen of our mutual friends joined us there (and briefly the Simpson family) as we shared  Vivian’s vegetable medley and had some of Kody’s smoked ribs and chicken (and a dessert platter).

I wound up being a long night, as we played a round of Christmas trivia (which I won!) and then some 90s trivia followed by a round of two or What’s Yours Like. Kody also had a “sexometer,” some old gag gift from the 60s, which we all passed around and tried out. Of course, we didn’t leave without someone sneaking off and rearranging some of Jenny and Kody’s clothes to make interesting surprises in random spots around the house. I know this only because photographic evidence wound up on my camera. Ahem. 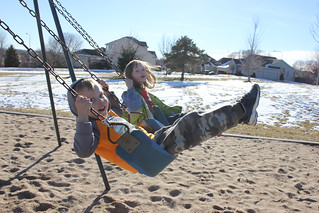 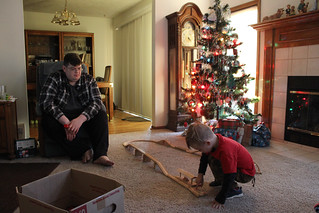 It’s also been a lovely and warm couple of December days, which meant extra playtime with the kids outdoors. I took them for a trip to the park on Saturday, and I got some exercise pushing them on swings and on an X-Wave teeter-totter together.

Then on Sunday, the kids rode a tricycle in our driveway and Hannah made an x-marks-the-spot treasure hunt for Aaron and me to go on. We even took a walk to grandma and grandpa’s house in the wagon so Aaron could play with trains as we introduced Hannah once again to Mr. Bean (who played with a Nativity Set).