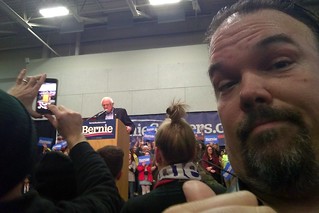 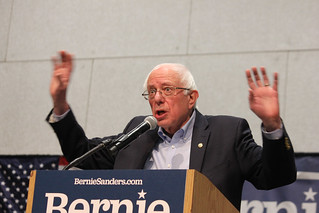 So Bernie Sanders came to down the other day, in a Presidential Campaign that hardly seemed to take a breath since the last one. Sanders is currently the Democrat front-runner despite not being a member of the party, and that seems to be appealing for the populist crowd he spoke to at the Mid-America Center. The usual campaign characters were there, including PowerLine blogger Dave Begley, Mark McKinnon filming for Showtime, vendors with potty-mouthed merch, and even congressional candidate Kara Eastman, who was on stage with the Bernie backdrop brigade.

There was a bit of music for the crowd as we waited for the show to start, and then two women spoke before introducing Sen. Sanders, who arrived only a few minutes late (a welcome change from the last time he visited, in which I gave up after waiting for two or three hours). Then Sanders gave a stump speech with an ironically religious fervor, the atheist candidate addressing the crowd more than once as “brothers and sisters.” He spoke about ideas no longer radical in the Democrat party: free health care, free college, and a $15 minimum wage, all paid for by the “top 1%” and “corporations” (which the crowd seemed to think paid no taxes at all).

In many ways, he’s very similar to Donald Trump: a populist “upstart” with an anti-establishment appeal at odds with his own party. I don’t think I agreed with hardly anything he said, but I can clearly see why the crowd likes him. 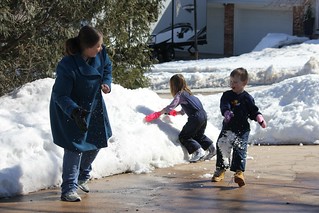 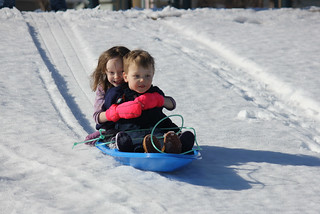 In other news, we had yet another four or five inches of snow last week that cancelled school and spurred me to take a day off from work to do some shoveling and spend some quality time warm inside with Vivian and the kids.

The weather seems to have warmed up quite a bit since then, so on Saturday we decided to make the most of the snow while it lasted. We had a brief snowball fight with the kids in our front yard, and then we took them down to the Sandy Park to do a bit of sledding. The snow was still several inches deep, which made swinging nearly impossible and walking through the deep snow a bit difficult (especially for wee folks with short legs). We still had a good time, and I’m sure the snow will be gone before we know it (“and good riddance,” says most of Omaha).