Well, we’re in the midst of the longest winter in human history, with enough snow dumping on us every other day to make Narnia look like a beach resort. It hasn’t interrupted too many of our celebrations this past week, however, so we’re taking it in stride. 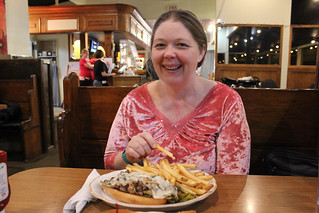 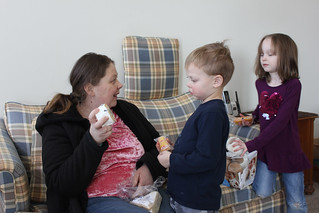 On Thursday, I celebrated Valentine’s Day by making Vivian and the kids a breakfast of heart waffles and bacon roses early in the morning. Hannah had some fun dressing the part with hearts on her shirt, jeans, and socks, and both kids colored Valentine’s cards to give to Grammy on their way to BSF.

I secretly stayed home in the meantime, making a red velvet heart cake and preparing a double-layer heart pizza for a Valentine’s dinner. Then I ambushed Vivian when she returned home to take her to lunch down at the special, where we had cheese steak and a pork tenderloin sandwich for our Valentine’s lunch. I had a few gifts for Vivian and the kids afterward, namely cards and their favorite cheeses, and I also had a few gifts for my mom, who watched them while we were away. (Vivian also had a heart-shaped box of truffles for me, which I’ll try not to eat all in one sitting.) 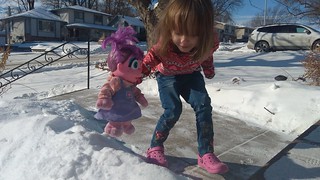 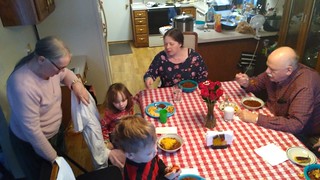 We had dinner at Dennis and Kara’s house on Saturday night right before a new winter storm rolled by. The plows seemed to take a while to get to our street, but we still made it to church once I was done shoveling the driveway. The chili cook-off they’d scheduled for that evening was inexplicably cancelled, however, so we took the chili Vivian had made to my parents house, where we ate it with them and Uncle Jonny instead (bringing along some post-Valentine’s roses for my mom to adorn the table). 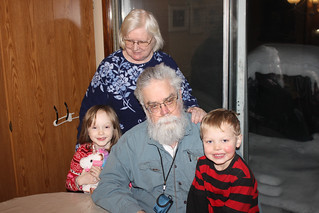 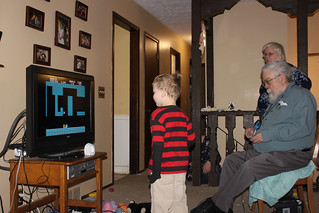 Then on Monday, we got to celebrated Jack and Donna’s anniversary with some paella together for dinner. I’d grabbed the necessary ingredients the Saturday before, and Vivian cooked it all up for us to eat together. Both Jack and Aaron sat down to play some Super Mario Bros. in the meantime, which was fun to watch them play, and after dinner Vivian and I gave them a card with of my signature cartoons.

We’ve apparently got more snow in store tonight, and by now the days of sun, grass, and leaves seems to be a fading memory. It’s hard to believe soon things will be in bloom again and we’ll be complaining about mosquitoes and triple-digit heat waves once again.