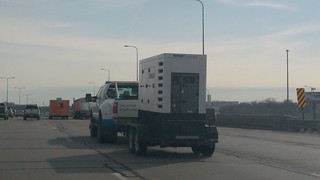 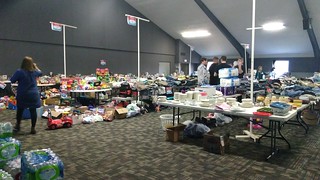 The whole state of Nebraska is dealing with the aftermath of the record-breaking floods we’ve had this week. Everywhere we go we’ve seen signs of neighbors helping out, including disaster relief trucks all over the place in Omaha. Every church we know has been collecting supplies to help those affected by the floods, turning every available multi-purpose room into a storehouse of food, clothing, and cleaning supplies. It makes me proud to live in a state where everyone seems to be ready and willing to help complete strangers when something like this happens. 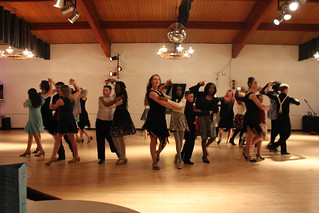 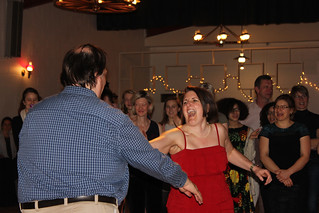 In the meantime, we had a bunch of birthday events happening over the weekend. First off was on Friday, when Catherine (or Dr. Keefe, as I call her at work), celebrated a birthday with the Omaha Jitterbugs down at the Eagle’s Lodge. Vivian and I had the rare opportunity to attend the dance together, setting up ahead of time and then dancing with a handful of our friends when they arrived. Some kids from Arts in Motion came to demonstrate a handful of dances before the evening got underway, and Catherine brought a batch of cupcakes to share before we had her birthday jam.

It was nice to see the crowd for Jitterbugs Night Out was still as large as ever, and it’s remained very much the same since I first attended around 13 years ago. While many of the same people still attend regularly (looking at you Dan Wondra), there are now so many more “regulars” I’ve never met that I now feel a new generation has taken it over. And that’s OK. 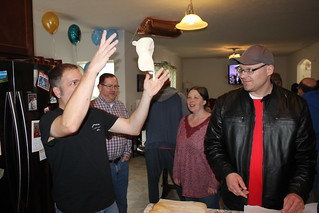 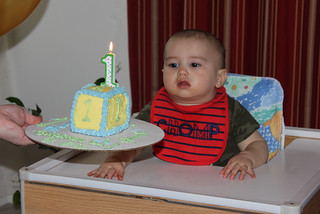 The next day, it was birthday time at the Simpson House. Little Gabriel turned one year old, while Phil celebrated a birthday of his own several months late. We got to make our own pizzas (or garlic bread) using dough from a gigantic bucket and an assortment of ingredients laid out on the counter. We even got to try tossing the dough in a stereotypical fashion that was more fun to watch than practical. There were plenty of kids on hand as well, providing good company for Hannah and Aaron as we got a little grow-up time (and stuffed our faces). 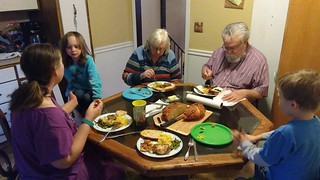 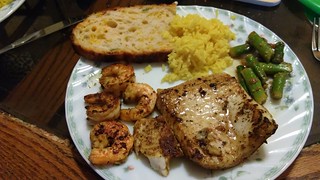 Then on Tuesday, I managed to crash a fancy dinner Vivian had planned with her parents when I turned out not to be driving to Lincoln as she expected (to get a car, more on that below). I’m not sure how secret the dinner plans were supposed to be, but they fortunately had enough calamari steak for me to have some, along with some shrimp and tasty cheddar jalapeño bread (which Vivian finally got to make right now that she used non-expired yeast). 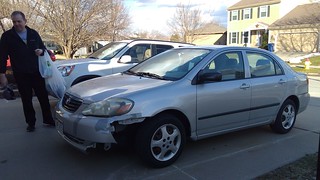 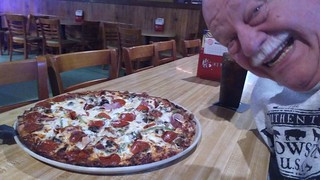 In other news, I’m nearing the end of my pledge to drive our Honda Civic “until the wheels fall off.” It’s had a number of minor issues that culminated a week or two ago when it had an irreparably flat tire combined with a spare I discovered has a leaky valve. I’ve been carpooling with my dad and Uncle Jonny since then as I’m getting ready to take ownership of Uncle Nathan’s Corolla — which has its own unique set of problem but far fewer miles on the odometer.

On Thursday, I went down to Lincoln to officially buy the car from Nathan. Dad came along and the three of us went out to Big Sal’s to celebrate with pizza. Now we’re busy trying to get the car fixed up so it’ll be properly driveable before I actually start driving it. Say a quick prayer as we try to get all that sorted out before saying goodbye to our dearly departed Civic!