The news of the day is snow, snow, and more snow. We had three legit snow emergencies in a week, one of which caused a couple hundred miles of I-80 to be shut down as semi trucks and vehicles when sliding around in the worst vehicle pile-ups some state troopers had ever seen. 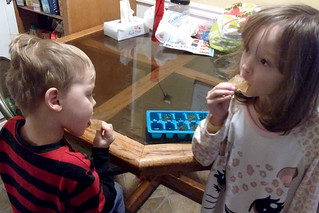 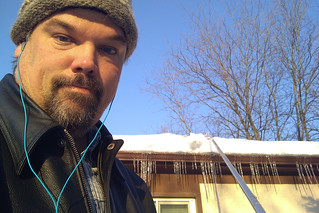 Our first snow event came crashing down Saturday night, cancelling the early service at church and even the chili cook-off planned for that evening. We had another downfall a few days later that shut down schools (again) and inspired me to have an impromptu science project with the kids: placing an ice cube tray of juice outside to turn into tiny, fruity, popsiclettes. It wasn’t cold enough to freeze them quite as thoroughly as I’d hoped, but the kids still enjoyed them.

After the second snowfall, I also did a bit of extra shoveling at my in-laws’ house — namely taking a snow rake to the roof and scraping off an extra foot of the white stuff. I’m definitely getting a workout every time I have to shovel this stuff, and it helps when I can’t get to the Kroc Center. 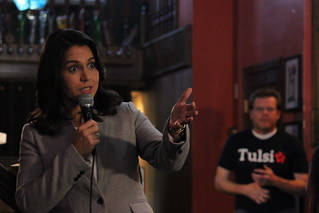 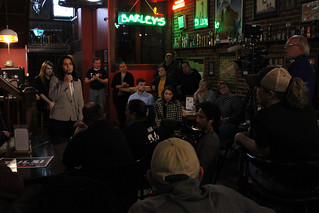 During a brief window between blizzards, I dropped by Barley’s “back room” in Council Bluffs to meet Democrat Congresswoman (HI-6) and Presidential candidate, Tulsi Gabbard. She’s been tracking near the bottom of the polls I’ve been able to see, but she impressed me as a candidate. She’s a woman from a multicultural and multi-religious household, but she also served in the Iraq War in the National Guard, making her fairly unique as a Democrat candidate. Her brief stump speech seemed to focus on ending “regime change wars” overseas and she also said we were at the greatest risk of nuclear war in the world’s history (which I found a bit questionable).

What impressed me most was her apparent bipartisanship, writing a bill that was co-sponsored by Rand Paul and wanting to support issues regardless of the “R” and “D” after them. This was a refreshing change from other platforms that seem to begin and end with “Orange Man Bad.” I don’t agree with her on many issues, but I did stick around to tell her I appreciated her willingness to reach across the aisle. We need more of that.

(You can watch the event here and maybe get a glimpse of me!) 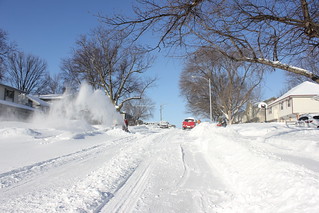 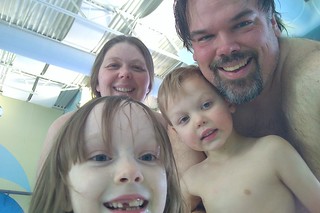 The biggest blizzard came on Saturday night, dumping around nine inches of the white stuff this time. I brought in a giant icicle from our porch, which had been growing hilariously over the past week. We mostly had some quality time indoors and away from the treacherous streets. (The UNO dome wasn’t so lucky, crashing from the wind and snow in the meantime.)

The next day, however, the sun came out and I spent a good while shoveling both our driveway and my in-laws’. I got a bit of help from our neighbor Mike, who was kind enough to walk by with his snowblower and help clear our driveway completely unsolicited. Our kids stayed inside playing “restaurant” together in the meantime. We had actually been planning to have a sushi birthday with the Mills family that afternoon, but three of their kids were sick and they unfortunately had to cancel (which meant sushi for us for lunch).

In lieu of a party, we decided to take the kids down to the Kroc Center for the afternoon, braving some still-slippery streets to have an afternoon in their warm, indoor water park. It was a nice, warm end to a long, and snowy week — though the cold is still persisting even as we head on in to March.