The trees are blossoming, the daffodils and tulips are coming up, and the Johnson Family is as busy as ever, mostly having fun with warmer weather and celebrating Easter with our family — and according to my calendar, it’s not slowing down anytime soon. 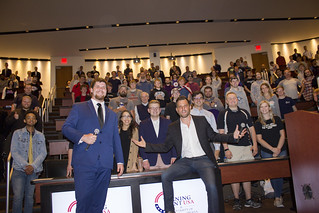 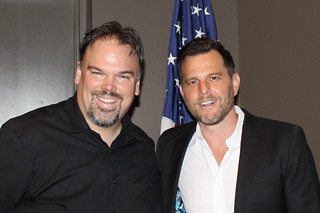 On Tuesday, I went to the lats Men of God event at Wildewood of the year, which included boneless pork ribs, which I ate entirely too much of (i.e. two). Then on Wednesday, Dave Rubin — a “classical liberal” and host of the Rubin Report — came to UN-O courtesy of Turning Point USA. He was the first major speaker for the newly-created campus group, and at least 100 packed one lecture hall about a mile from where I work to hear his talk.

I’d been listening to Rubin’s “long-format conversation” talk show for a couple years now, so it was exciting to see him in person. He talked for about an hour and then had an hour of Q&A from the audience. I had the opportunity to recommend one of my favorite films to him, Brazil, as an example of the best “libertarian” film out there. I saw many familiar faces in the crowd, which was largely friendly, and most attendees stayed to meet and greet Rubin afterward (including me, of course). Special kudos to Matt Anderson for pulling off his first major event for the TPUSA Omaha chapter. 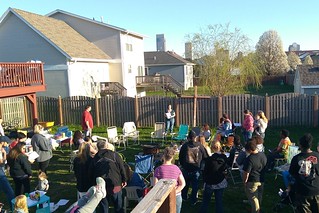 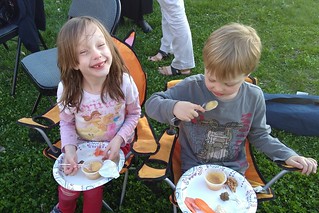 The next evening, I went to RiffTrax live to see the awful rubber-suited Octaman. Most of the usual crew couldn’t make it, save for Ben Peet, so it was a fairly quiet event, though I did get to use Richard Burney’s seat for extra space, which was nice. Then at home, I brought out some matzo crackers I’d gotten for Passover, which Vivian and I had with some kosher wine.

Then we kicked off a long Easter Weekend with some friends from the Bellevue Area Christian Homeschoolers (BACH) in a newer “suburb” of north downtown. They had a live sheep on hand (for petting) and a table full of bible-era food for us to eat together (and a campfire for s’mores). Our hostess also gave a long talk about Passover, Good Friday, and scriptures relating to it, but our kids seemed more interested in the play area until the food was ready. 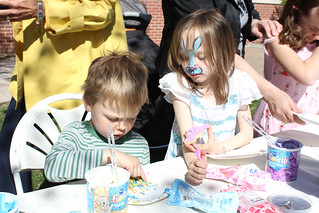 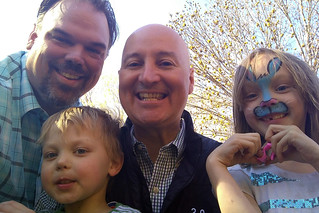 The Easter fun continued Saturday morning as we drove down to Lincoln for an Easter Egg Hunt and party — at the Governor’s Mansion of all places! We parked right next to the Capitol and joined a couple dozen other families for fun in the Governor’s backyard (literally) — face painting, cookie decorating, live ducks, an Easter Bunny and a little egg hunting, of course. Gov. Ricketts was also on-hand to meet and greet guests, getting pictures with nearly everyone in the process.

It was a fun event, and the weather couldn’t have been better. It was also free, with only a request for canned goods for the local food pantry. I’m not sure how we managed to get an invite, but I’m glad we were able to come, since our usual Easter egg hunting venue (Bellevue Christian Church) was cancelled in lieu of flood relief work. 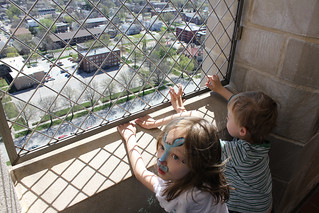 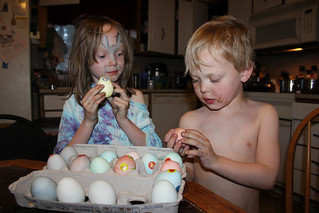 Of course, we also had to walk across the street for a quick look at the Capitol afterward. I showed the kids the statue of Abraham Lincoln and showed Hannah where our State Senator works. We spent most of our time up in the rotunda, though, taking in the view from the highest point in the city. We grabbed a little lunch on our way out of town, which included spring rolls and beef pho from Pho Nguyen.

That evening, after cleaning house a bit for Easter, the kids got to color and decorate some eggs together at our kitchen table before calling it a night. 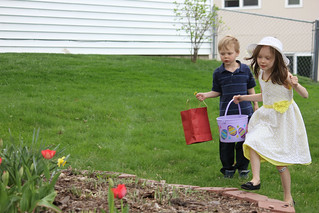 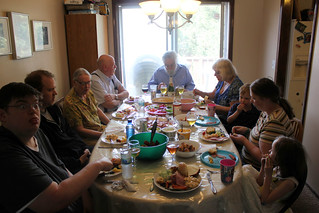 Then came Easter Sunday! We all dressed up for church (including Hannah’s dolls) and stopped on the way by grandma and grandpa’s house to hide some licorice jelly beans from the “Easter Bunny” (which they found afterward). Then back home, we let the kids hunt for eggs in the front and back yards as Grammy and Pop-Pop came over to watch. We had a few Easter cards appear in our mailbox in the process, as well as some special additions to our yard.

We had some hors d’oeuvres inside afterward, and then Vivian made a glazed ham with her dad for Easter Dinner, among several other things. My mom and dad dropped by later with Uncles Nathan and Jonathan, and the kids set the table for us to eat shortly after four. There was plenty of food, and I managed to stuff myself without even going back to seconds of anything. Of course, there was also dessert — fudge and shortbread cookies (which the kids helped make) as well as frozen pies from Village Inn and Marie Callender.

It was a long, fun weekend, but now that spring is underway and summer is almost here, we’ll have lots more going on before we can take a breath! 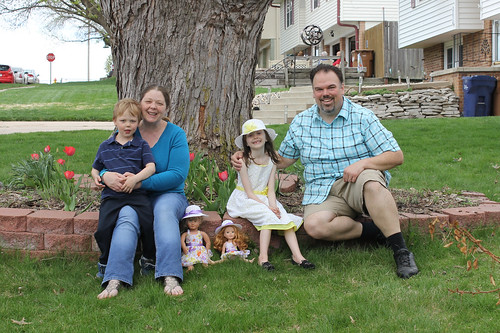