We’re having a lovely spring, with baby bunnies running through our yard and the lilac, peonies, and hostas all in bloom. We had a couple thunderstorms as well, one of which blew out the side panels in our deck and knocked a tree down across the street. Fortunately, they haven’t done much worse — or interrupted any of our fun, outdoor activities. 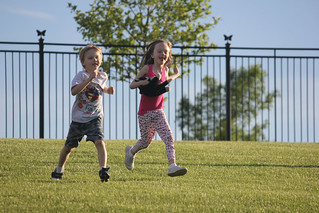 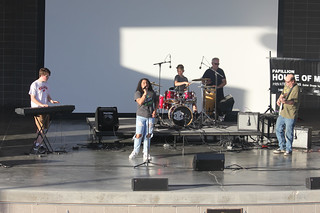 First up was the first outdoor movie of the year at the SumTur Amphitheater (AKA the “Movie Park”). Some middle-school age kids were giving some kind of performance with the “House of Music” through much of the evening, playing some cover songs as the kids got to run around on the grass for a couple of hours.

Then, (well) after the sun went down, we got to watch Spiderman: Into the Spiderverse, an animated film that featured various incarnations of Marvel’s web-slinger. It was a fairly interesting movie, though it was played several decibels too loud for my liking and was far more violent than I expected from the Dove review I’d checked out. 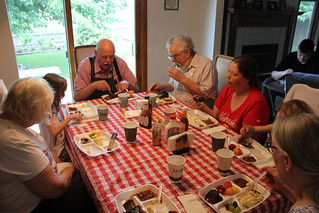 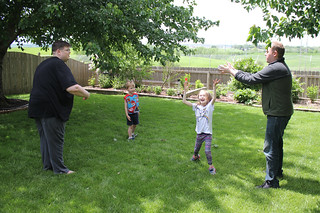 I got a good deal of exercise over the weekend cleaning gutters and mowing my parents’ lawn. We also had dinner with our friends the Lenarts on Saturday and spent Sunday afternoon swimming at the Kroc Center to cool off.

Then on Memorial Day, we broke out the American flag and walked the kids to my parents’ house to have beef ribs (and cobbler). Jack and Donna joined us, as did as my two brothers. After we ate, Grandma brought out some old photos to show Hannah her grandpa in his army uniform. We’d told the kids the meaning of Memorial Day, which Hannah managed to illustrate in her sketchbook later on.

We enjoyed the outdoors a bit more in the afternoon, playing some ball with the kids and uncles in the backyard and then playing a few other games indoors before calling it a day. 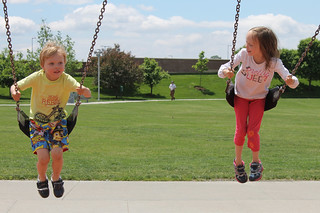 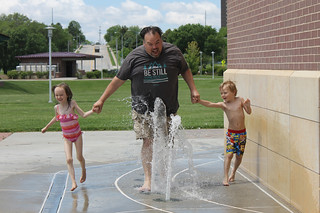 In other news, the kids will both be attending all-day summer school through the month of June. This was an elective decision on our part to give them both time for intense socialization in a public school environment without making a full-year commitment. As such, we had one last lunchtime rendezvous at “daddy’s park,” giving the kids the chance to swing and splash about in the recently-activated fountains by the spire. I even brought along a chance of clothes so I could join in with them. We won’t be able to do this again until July or so. 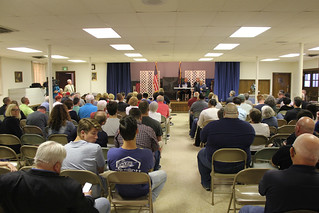 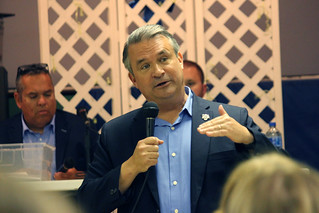 Then on Thursday night, I dropped by St. Luke’s in South Omaha for a town hall with Congressman Don Bacon. He holds these types of events regularly (unlike his predecessor), so I try to take advantage of the opportunity whenever I can. The room was about half Republican and half Democrat, if my gauge of the applause and boos are correct. Everyone had the chance to submit a question, which were pulled at random from a box. My question was what he though he’d be ale to do with the other party controlling the house. “We need to do better at that … It’s a frustrating thing,” he responded.

There weren’t too many fireworks, but I was surrounded by constituents who were grumbling, sighing, and even yelling out their own opinions out of turn throughout the event, so it was a bit difficult for me to bite my tongue and stay silent. Still, it was a good exercise in self-control, and it felt good to know we live in a country where you’re allowed to yell at your congressman without getting thrown in prison.