We’re creeping up on the busiest time of summer, when we hit a slew of our favorite outdoor activities just as the temperature ramps up to smoldering (and hopefully without any rain). 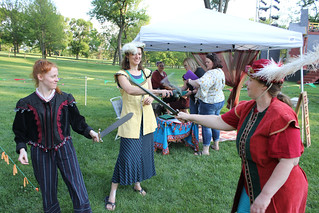 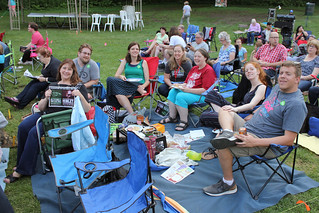 First on the agenda is our first visit to Shakespeare on the Green. It was the evening that almost wasn’t, as the National Weather Service was predicting an 80% chance of rain during the show all the way up until a few hours before it started. I fortunately hedged my bets and saved us a spot on the green. A handful of our friends joined us for a relatively pleasant (and perfectly dry) evening. As usual, we got to play a bit of dress-up and share some food and drink together before the show started. This evening’s program was All’s Well that Ends Well, played entirely by a female cast this time around. I was only vaguely familiar with the plot of the play before it started, but it was fairly easy to follow, even with the gender-bent cast. 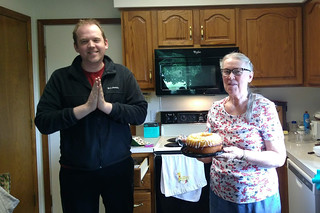 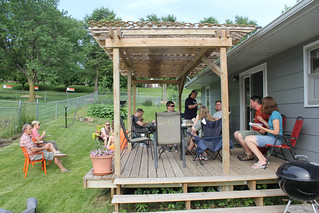 Saturday was my brother Nathan’s birthday, so my dad grilled up burgers for lunch and we even had a “7-up” cake to celebrate. Hannah and Aaron both decorated some cards, and we played a game or two after lunch. (Dad also wanted to play some old movies of his, but his ancient movie projector decided not to cooperate.)

Then that evening, our friends Kody and Jenny hosted a “deck party” up at their house in Bennington. Kody had some pork tacos for everyone, and we got to eat outside with a handful of our friends and their kids. Aaron had Hannah played some made-up games with hula hoops and had a particularly good time chasing bubble around. There were more thunderstorms in the area, but we were fortunate enough to remain dry the whole evening once again. 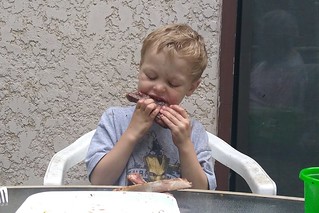 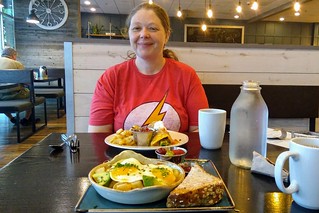 I decided to take Monday off for a delightful kid-free day of cleaning the garage. I also wound up mowing three lawns in the space of a few days — my dad’s, Jack’s, and our own. Jack actually cooked up some barbecue pork chops and shrimp for dinner, which we ate with the kids out on the back deck after I gave the lawn a trim.

This is the kids’ last week of Summer School, so Vivian and I have been making the most of it — particularly having a breakfast or two together without the need for babysitters. On Wednesday, we went to First Watch here in Bellevue, and then on Friday hit Burger King, just for the heck of it. It’ll be nice not having to shove the kids out the door every day for school, but it’s also been nice to have some quiet days for cleaning up the house as well.

Next stop: Memorial Park Concert and the Fourth of July!