It’s been a fun week in politics leading up to our annual camping trip with the Mills. 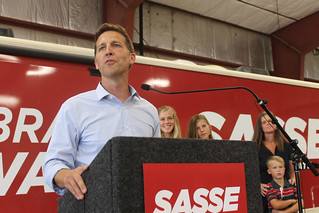 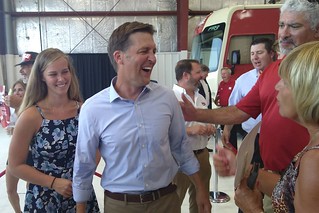 First up on Monday was an event with Senator Ben Sasse, who announced the kick-off for his re-election campaign in a hot, steamy airplane hangar in Millard. A crowd of a couple hundred people were there and included GOP all-stars past and present: Don Stenberg, Kay Orr, Dave Heineman, Jean Stothert, Pete Ricketts, Congressmen Bacon and Fortenberry, and many others. The oppressive heat didn’t seem to be anybody down (even the ones in suits), as a couple folks broke out dancing waiting for things to get started. Jim Rose from KFAB acted as emcee and introduced Sasse with a brief line-up of VIPs before the junior senator took the stage with his family. He then gave a brief stump speech on civility and socialism, touching specifically on the aftermath of the mass shootings over the weekend.

Sasse stuck around to meet-and-greet and get selfies with several of people in the crowd (including me, of course). Then he and his family rolled off in a giant campaign travel-trailer as his 2020 bid for re-election officially began. Sasse didn’t do any interviews with the press afterward, however, but several of his guests did. The rest of us stayed and mingled for a while, and I enjoyed seeing Jon Tucker and Tom Becka get into a real-life Facebook argument before I headed out. 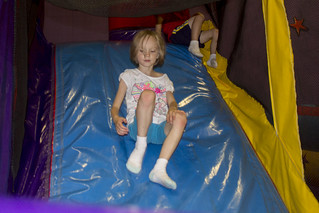 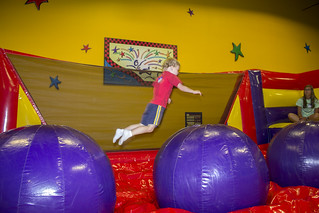 Meanwhile, Vivian took the Hannah and Aaron to “Pump it up” for a night of bouncing in a large, inflatable playground to burn off some energy. It was hosted by the Autism Society of Nebraska, so there was no blaring rock music overhead this time around, which made for a strangely more peaceful event.

Then on Wednesday, Vivian took the kids on their last trip to “Mud Pies” at the Fontenelle nature center. They’ve been going to this little program since Hannah was barely a toddler, but now they’re remodeling and restructuring or something so the program they knew won’t be there any longer. It was kind of a sad way to say goodbye to the days of painting and visiting animals (both real and plush) that they’d grown up enjoying for so long. 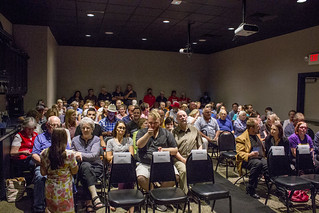 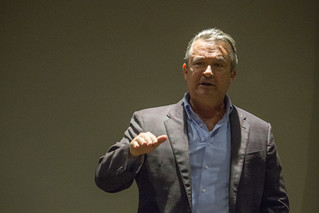 Then on Wednesday, Congressman Don Bacon hosted a town hall, the first since the one I attended in Omaha back on May. The event was held at the Fire Barn in Waterloo in a room that only held around 120 people. A campaign staffer apologized for the small venue, saying that they couldn’t get a larger one due to “liability concerns.”

Whatever those concerns might have been, they didn’t materialize as the town hall started. The folks in the room were largely friendly, and there were only a few times people seemed to be yelling out of term (unlike previous town halls where it seemed more the rule than the exception). Many of the questions were on gun control, assault weapons, red flag laws, and racism in America (particularly relating to President Trump). Bacon answered the questions drawn randomly from a box, even if they were from people who hadn’t made it into the room. There were about four or five protesters outside, but the back-and-forth inside was congenial to say the least, even among those who disagreed with the Congressman.

There was also national media present in the room, with folks from the Wall Street Journal, Washington Post, and even Vice among them. It’ll be interested to see the reporting on the event, since there weren’t the partisan fireworks some might have been expecting. 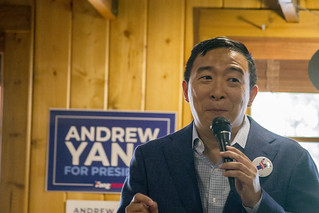 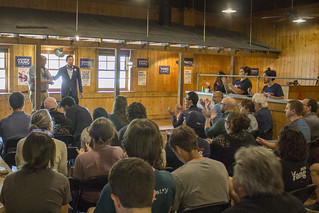 Then on Thursday, just to be bipartisan, I swung by the “Tech Brew” event in Council Bluffs to catch a glimpse of Andrew Yang, who today qualified for the next Democrat debate). About 70 people (including a handful of media) turned out at the Kitchen Council to see the entrepreneur turned Presidential candidate. I’d heard a bit about him via the Joe Rogan and Ben Shapiro podcasts, and I’d also read a bit about his proposal for a $1,000/month Universal Basic Income, which sounded a bit far-fetched to say the least. He was a very interesting candidate, however, sounding very reasonable as described how workers displaced by automation had helped elect Trump. I didn’t have long to stick around after the Q&A, but I’m hoping he has the chance to swing by again before the caucus is over.