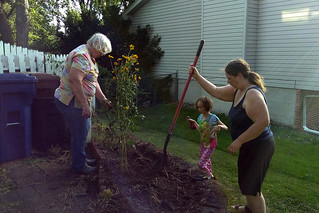 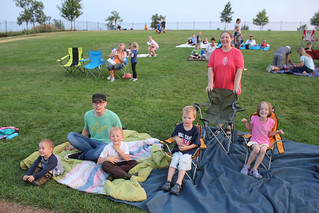 We’re enjoying the downward slope of summer and getting a few things done around the house before fall. I’ve been doggedly putting a fresh coat of paint on the house, which would have been hard enough if the paint store could consistently match the paint. Donna also came by and got the kids to help her plant a few new daisies in our yard (transplanted from her own). In addition to this, we’ve had an abundance of visitors — namely bag worms wrapped in leafy cocoons — descending from our maple tree into the yard. I’ve been busy getting rid of the little pests and hoping they haven’t caused any permanent damage.

We had some lovely cool weather on Friday night for our second and final trip to the SumTur this season. The August and Gabriel (and Joe) came along for some quality running-around time with Hannah and Aaron, dancing by the stage and flipping chairs before the sun went down. Then we headed back to our blanket to watch How to Train Your Dragon 3. 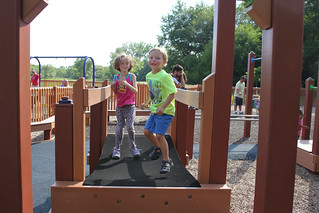 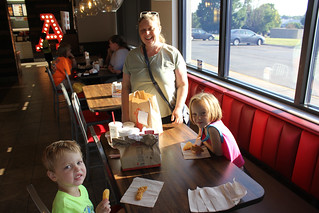 On Saturday, we took the kids down to Dream Land Park for the first time since its major remodeling last year. They got an hour or two of swinging on giant saucers and climbing on a rope merry-go-round. There were plenty of other fun places to explore, like a rope bridge, captains helm, bouncy bridge, sticky metal slides, and some replicas of a few historic buildings in Council Bluffs (redone as play areas). I also found a stash of a certain plant that I’d found there last time we visited three years ago. (Apparently nobody’s gotten rid of it yet.)

Afterward, we stopped by Arby’s to have a dinner of sandwiches, fries, and milkshakes with the kids before heading for home, 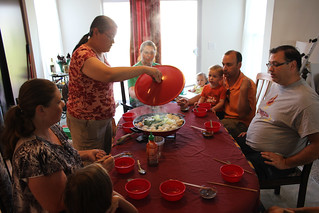 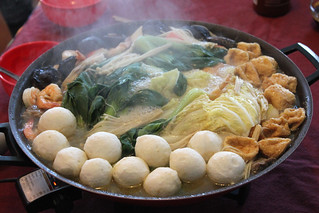 Then on Sunday, Phil and Jen invited us over for a “hot pot” at their house. I can’t recall having such a thing before, but it apparently involves cooking a variety of raw ingredients in a giant wok — shrimp, beef, chicken, fish balls, fish cakes, boh choy, rice noodles, and any number of things — full of boiling chicken stock. Another family was invited with their kids, so our kids got to play with some new friends for a while before we sat down to eat.

I managed to help myself to multiple tiny bowls along with some Asian “barbecue sauce” (mixed with raw egg and soy sauce). I was also happy that our kids sampled a bit of everything, including the fish balls we’d brought from the Asian market. After we’d had our fill, we got to sample some of Jen’s birthday scotch before she served up some shaved ice with vanilla ice cream, sweet red beans, and frozen fruit for dessert before we called it a night.