We just got back from a three-day weekend of camping down at the Two Rivers State Recreation Area, right on the edge of the Platte River. It was a hot and muggy weekend filled with bugs and ending in rain, but we still managed to have some fun with the kids cooling off in the river and watching the kids make new friends on the communal playground. 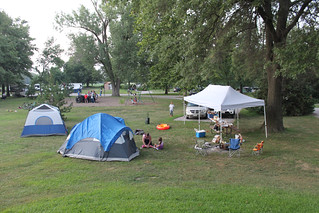 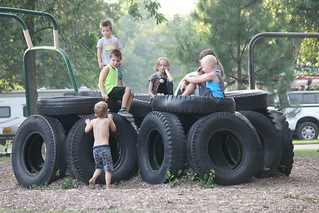 After spending a good chunk of Friday packing up and getting food for our trip, we headed across the river and past Waterloo to our site at the Goldenrod Campground. Ours was lot 72, right next to the playground and a small water pump that was used almost non-stop through the weekend. We got the tent set up and Vivian made a “hobo style” dinner of chicken, potatoes, corn, and carrots wrapped in foil as the kids explored the playground next door. Our kids also got some special presents for the weekend — a tent for Hannah’s doll and a travel version of Hungry Hungry Hippos for Aaron.

Our friends the Mills joined us in time for dinner as the sun went down and the entire campground filled up with travelers. According to a sign at the entryway, every single site was booked for the weekend. 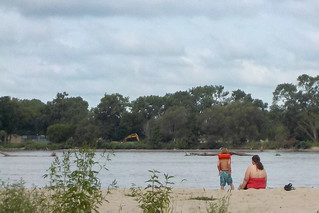 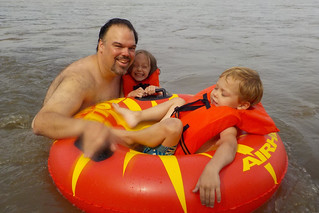 The next morning, Nate and Lexi fixed us a breakfast of “Dutch Baby” and some eggs, and afterward Hannah found a tiny toad, which she decided to name “Gooey.” Then after breakfast, we headed down to the riverside to wade in the Platte River. There was enough sand left at a washed-out campground to create a makeshift beach for us as we led the kids down into the nice, cool water. The Platte was shallow enough to wade out a ways, and Nate brought and inner tube that the kids got to ride on for a bit. It was mostly nice just to escape the oppressive heat and humidity in the cool water for a bit.

Then on the way back, we dropped by the lake by our campsite for a little more swimming. That water was even colder, which almost made up for the gross algae and mud as we splashed around for a bit with the kids. 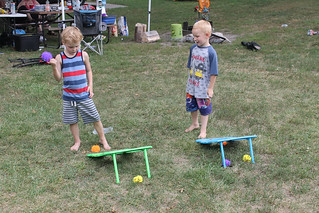 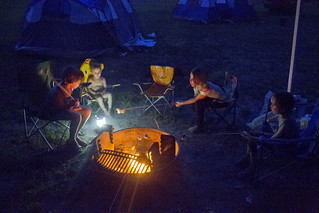 The kids spent some quality time on the playground in the afternoon and also made some tin foil “creatures” with Vivian’s direction at our picnic table. Vivian and Lexi made some chocolate cake in the Dutch oven in the meantime, and I broke open Aaron’s game of “goofy ball toss,” which he played a bit with August once I got it assembled. Lexi made some barbecue chicken for dinner, which we ate with tortillas. 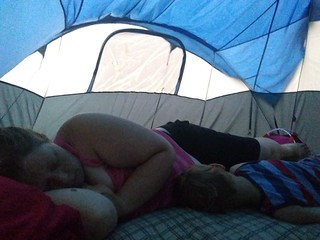 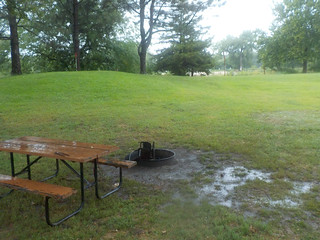 On Sunday morning, we woke up to the patter of raindrops on our tent followed shortly by thunder and a torrential downpour. Our tarp did a fairly decent job keeping most of the rain out, though it came down hard enough in spots to leak through. Once it let up a bit, we started tearing down the campsite, but we were still soaked within minutes. Then we made a hasty return home, wondering if next time we ought to just rent one of the cabooses on the south side of the camp instead.

School is getting set to start again, so Vivian and I barely have time to recover before jumping back into that daily routine. Maybe I’ll have the chance to catch my breath before my birthday the end of the month.