I turned a year older on Thursday last week, and boy am I starting to feel middle age catching up to me — mainly because we seem to have a non-stop schedule full of fun this time of year. 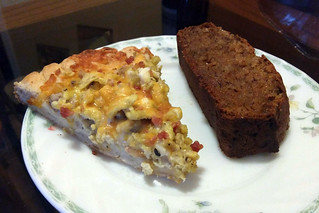 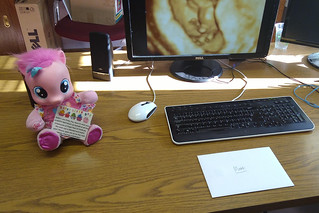 Vivian kicked things off early in the morning with some breakfast pizza and banana bread when I got up, as well as some fun maple bacon coffee I picked up at Aldi the day before. Hannah made her own card for me, and I played some video games with the kids before heading off to work.

At the office, I found a Happy Birthday banner waiting for me, as well as Pinkie Pie with a birthday card at my desk, courtesy of Dr. Keefe (as usual). I had my own little celebration over lunch taking a brisk walk to Walmart to splurge on a few childhood treats for myself, namely Ruffles, Cracklin Oat Bran, and Pimento spread (not eaten together, of course). 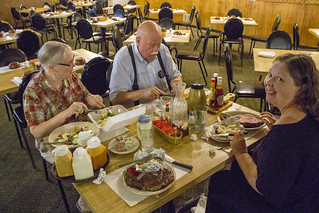 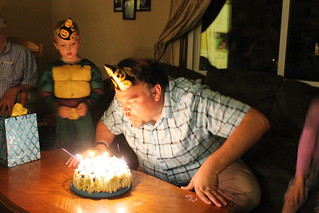 Then that evening, my parents took me out to the Pink Poodle in Crescent, Iowa, a family-owned steakhouse in a tiny town along the Old Lincoln Highway just a few miles north of Council Bluffs. I had a rib-eye steak and baked potato, which came with soup, salad, and bread served family style. I even got some chicken livers as an appetizer, which Vivian always liked to point out whenever they’re on the menu (and I decided at last that they’re not my thing). The little restaurant had a lot of home-spun charm, including cabinets filled with antique dolls and a framed newspaper article about one of their servers, who had been working there since 1956. It’s the sort of place I’d definitely go to again, if only to get the prime rib, which apparently comes in Fred Flintstone sized slabs.

Of course, we also had a smiley-face themed party waiting for me when I returned home, including a smiley-face cake and gifts from Vivian and the kids. 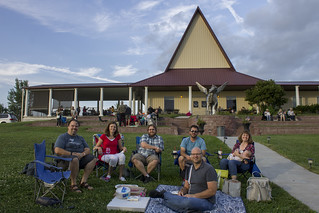 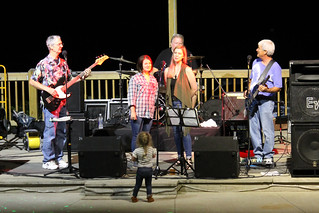 Then on Friday night, I had a “pizza picnic” at Soaring Wings with a handful of our mutual friends. I’ve been to this venue for birthdays twice before, and it seemed the perfect venue, with a live band playing music on Friday nights, and with the weather clear, dry, and in the 70s, it was a perfect evening for food and drink on their lawn. Of course, I snapped a few photos of the picturesque scenery before having a few samples of time inside, eventually settling on a rosé called Hummingbird (that’s the word). We’d dropped by Papa Reno’s for a Supreme Pizza beforehand, coupling it with an alfredo pizza courtesy of Jenny and Kody and a cheese steak pizza from Jon Paper. Venche and Ben joined us as well, bringing along baby Anya and a selfie stick for our amusement.

The band played a handful of cover songs and even announced my birthday to the crowd, which was delightfully embarrassing. We even had the chance to dance a couple times down in front, which seemed an appropriate way to wrap up the night. 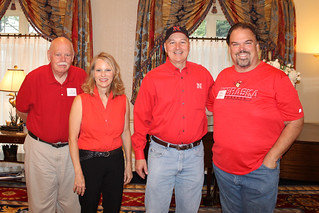 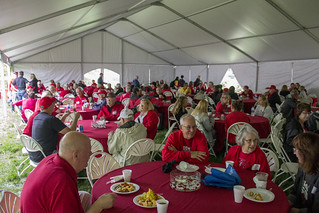 I was up early the next day with my dad for a trip down to Lincoln to attend a “tailgate party” down at the Governor’s Mansion. The day started off gray and rainy, but we were quickly led inside to meet and greet Gov. Ricketts and his wife Susanne in the parlor. Then they had breakfast for us out back underneath a couple pavilions in the backyard, so we didn’t get too wet. We sat with a few other guests and talked about politics and such as we ate. One was Bob, the guy whose photo I snapped at the Millard Days parade as he walked up and down the route carrying a batch of GOP yard signs.

A couple hundred other guests came and went throughout the morning before kickoff, and I didn’t recognize anyone else other than the Foleys, who sat next to us. Dad and I headed home afterward, taking scenic Highway 6 back to Omaha as a line of cars came crowding into Lincoln, apparently quite eager to see the Huskers struggle to beat the South Alabama Jaguars. 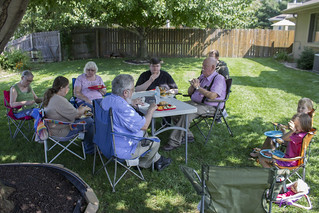 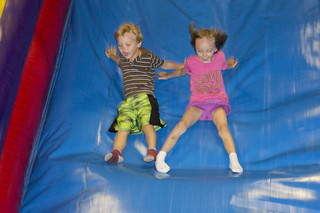 We had church and some more house-painting on Sunday with some truffle mac and cheese and pot roast to hold us over until Labor Day. Then my parents had a lovely cookout for the whole family on their lawn, with my dad smoking two tiers of burgers in his backyard smoker and Jack and Donna bringing up baked beans and cobbler to have with it. Uncle Nathan even took some time to draw with Hannah as Grandma introduced Hannah to a thing called a “newspaper” before we headed home.

Then that evening, because we’re gluttons for punishment, we took the kids down to Pump it Up to let them bounced around, slide, and bat some balloons to burn off whatever energy remained before bringing our long, long weekend to a close.