The fun fall traditions continued this week, as the trees around us all explode with colors before making way for winter. There was some beautiful weather on Saturday, so Vivian and I took the kids on a walk around the block as a family just to enjoy a few of the fall colors while they were with us. 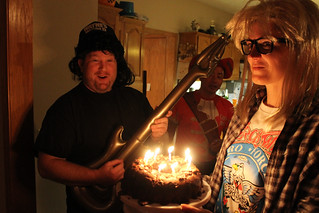 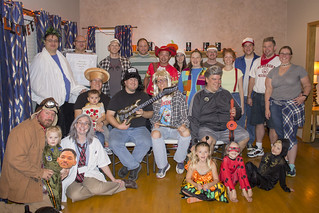 Then that evening, we headed up to northwest Omaha for another one of Jenny’s Halloween birthday parties. She decided to have a 90s theme this year, so we had Wayne and Garth in our midst, along with some Pokémon characters, the Y2K bug, as well as Little Caesar and Captain Morgan. I shaved my beard and donned a wig (and jogging suit) to go as President Clinton, while Vivian put on some colorful 90s clothes (and makeup) and went as Kimmy Gibbler. Hannah and Aaron were Ladybug and a Ninja, respectively.

Vivian also brought some lasagna and jack-o-lantern mandarin oranges to go along with the other Halloween foods, which gave us some energy as we danced the night away, doing Thriller, led by Takashi (of course). I also made up a card for the occasion, which I conveniently left at home. We had lots of fun as usual, though, and we only went home once it was apparent the kids had had enough. 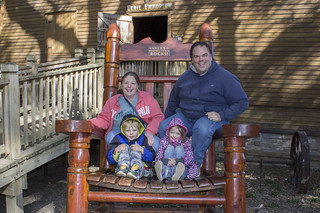 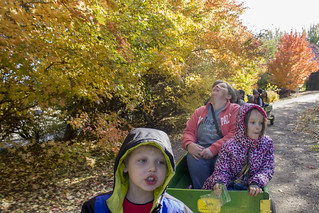 Then on Tuesday, I took the day off so we could spend a long, cool autumn day down at Vala’s Pumpkin Patch as a family. This year, Vivian and I actually worked out an “itinerary” so we could hit as many attractions as possible while not wearing ourselves out walking back and forth across the park, and it seemed to work out well. We got to see the jumping pillows, corn bin, train ride, bunnyville, pig races (with the pig wrangler), Xander the dragon, big chair, haunted house, wagon ride, spider web, obstacle course with net tunnels and a hamster wheel, big slide, storybook village, petting zoo, tricycle track, and pumpkin mine all without wearing ourselves out. There were still many little attractions we stumbled upon, such as rope and pulley games, spinning chairs, and a big apple that we might easily have missed.

The kids both got to fly on the new zip lines for the first time, and we also bumped into some old friends, Jolene with her kids as well as the Papson family. We got some chili cheese fries and succotash to keep us moving throughout the day, and then got some pumpkins for the kids before going home to crash for the night. In all, I took 575 pictures throughout the day, so you know we had a great time! Most of all, it was nice to see so many beautiful fall colors, which will only be with us for a week or two before winter. It was a fun day and part of an annual tradition I hope Hannah and Aaron will remember fondly as they grow up.