Halloween’s almost here, and that means we’re close to the time of perpetual darkness — AKA the end of daylight saving time — with winter not far behind. In the meantime, there’s more non-stop autumnal fun to be had, at least until the snow starts falling (which could be this afternoon). 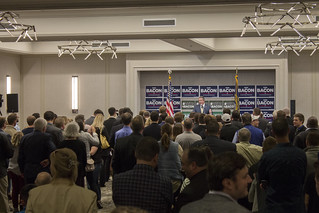 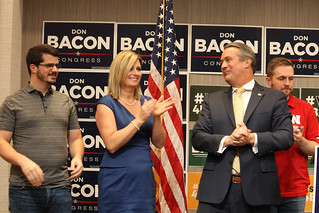 I had a busy Friday night, starting with a party to kick off Don Bacon’s 2020 re-election campaign. The event was held at the Regency Marriott, and it seems like just yesterday I was in the same ballroom for a victory party back in 2018 (or his previous kickoff party earlier that year). Don arrived moments after I did and spoke a few minutes to members of the media. Local musician Kaylyn Sahs played to music to start things off, followed by the National Anthem. Then Don had a long list of endorsements from Mike Foley, La Vista Mayor Douglas Kindig, Gretna Mayor Jim Timmerman, Bob Evnen, Aimee Melton and Brinker Harding from the Omaha City Council, and a few others. Then Don took the stage to give a stump speech touching on taxes, the deficit, abortion, and the current impeachment situation, among other things. His wife Angie and two sons were there as well, as he invited them on stage for a moment before meeting and greeting the couple hundred people in attendance.

In addition to the usual folks, there was a handful of little ones running about, including Phil with his son Gabe, so it really was an event for the whole family. I got to speak to Don for a few minutes about the Democrats’ “impeachment inquiry” being held behind closed doors in the capitol basement. Don said he actually walked in on Matt Gaetz’ attempt to walk in on the proceedings, but he only saw it from the back and had no idea what was going on. He said he’s only been able to get about 25% of the transcripts from the proceedings himself, so his view of what’s going on isn’t much better than anyone else’s. 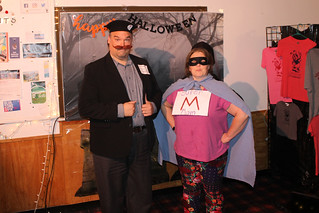 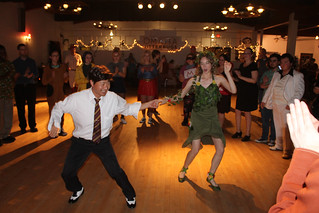 I returned home long enough to help tuck the kids into bed and then changed clothes for the Jitterbugs’ Halloween Party. I decided to go as “Pierre Delecto,” AKA Mitt Romney’s Twitter alter ego, which was outed only a few days earlier. Vivian donned a mask and cape and came as Super Mom. There was a fairly good crowd, though I’m no longer a regular at JNO, so I only saw a few familiar faces throughout the night — Eric, Mike and Merinda, Lacey, the Hamiltons, and Takashi (who led us in Thriller, of course), among a few others. We had a costume parade and a contest, and the winners being Napoleon Dynamite, Rey and Kylo Ren, and Star Lord and Gamora (though they were ALL winners in my book).

In addition to all the dancing, Billy managed to score a bunch of leftover food from another party that somehow didn’t need it, so Vivian and I both got some Lindy Fuel that kept us going past midnight, once the dance was done. Special thanks to Donna for letting us stay out that late! 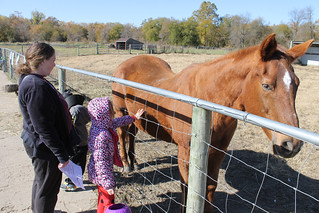 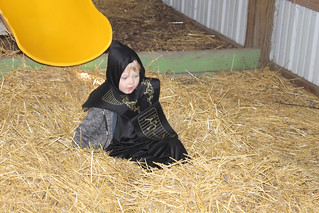 We started off Saturday with nothing on our agenda, but the weather was too darn nice to stay inside, so we headed off to Gifford Farm to enjoy some fresh air, see some fall colors, explore a few hideouts, and do some trick-or-treating. The staff had stations all around the farm set up for kids to collect candy, play games of ring toss (or ball toss), and many remaining animals to see, from chickens we could pet (or chase), to a horse, a donkey, sheep, pigs, and a bunny. We got a ride around on the hay rack and let the kids zip down the slides inside the straw barn for a little while.

A reporter from KETV stopped by to get some footage of Hannah that may or may not have been in their evening broadcast, which we never saw due to a football game delay. We finished off our visit by decorating some cookies with the River City Confectioners Association, which has always been a tradition, thanks to Vivian’s mom. 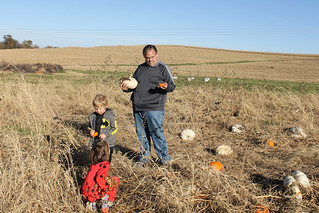 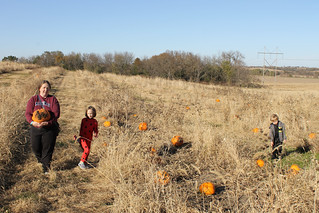 And as if all that weren’t enough, we had a quick lunch at McDonald’s and then went all the way down to Union Orchard to get some pumpkins from their pumpkin patch. Vivian had lamented us not finding any “on the vine” this year or in years’ past, but they fortunately had plenty of pumpkins — large and small, orange, green, and white — all waiting for us to pick. They were quite a deal, too — just $1 each for the big ones, and three for a dollar for the little ones (which Hannah got for her dolls). We also got some acorn and butternut squashes for a dollar each as well as some apple donuts for the ride home.

It was a fun, busy weekend, with more fun this coming week in-between Halloween and potential snow. Hopefully it’ll stay warm enough for the kids to get an obscene amount of candy once again.