We’re all still recovering for a busy birthday weekend, fitting a 40-year celebration with Vivian and then a second one with just just a day later. We celebrated each day the only way we know how — by eating way too much. 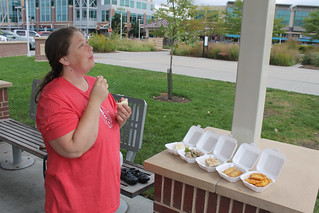 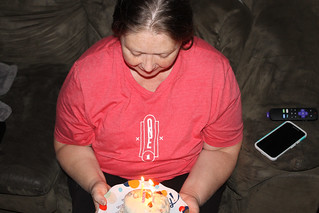 Vivian’s official birthday came on Friday, so I got up early to make some “retreat toast” for breakfast, a gooey concoction with coconut and vanilla I learned from my mom years ago. Then for lunch, Vivian came to Stinson park with the kids, who got some quality time playing on slides and swings while checking out local wildlife, such as a praying mantis (and chasing the birds). Then as the kids played, I got Vivian some birthday dim sum for lunch from Golden Mountain across the street, and then we all had some birthday cupcakes from Jones Bros. before going home.

Then that evening, I swung by Wild Rice Sushi & Grill in Papillion to grab a batch of sushi for a birthday dinner for Vivian. I also had a special birthday cake ordered all the way from Kansas City — a slice of Mom’s Carrot Cake straight from Jake Stack, always a warm and gooey delight! 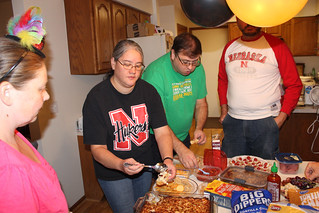 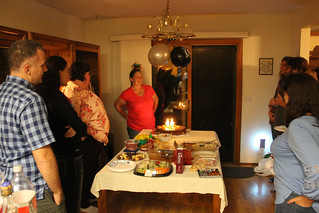 Then on Saturday, we had a birthday shin-dig for Vivian — hosted at my parents’ house! They were off visiting family in Cedar Rapids, so we took over the place with friends, food, and cake for a couple hours. I also put up a slew of 40-year-old decorations for everyone (and a hat for Vivian), and Donna brought over a dark chocolate cake with some buttery autumnal cupcakes (for those who are crazy enough not to like chocolate). Our friends brought some games, including “Hollywood Shuffle,” which was something between Balderdash and Apples to Apples. There were quite a few rain showers as well, but we got a reprieve long enough to light up a fire pit on the back patio shortly after Vivian blew out her candles.

It was a bit exhausting, both setting up, hosting, and cleaning up afterward, but we had a lovely time, and the house remained spotless when the clock struck midnight. We also had a lovely bunch of food from our friends, including bruschetta with garden tomatoes (from Frank) and pork loin with peanut sauce (from Phil and Jen). 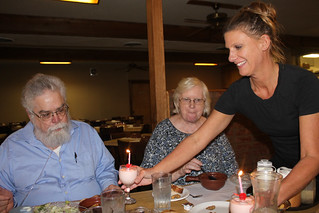 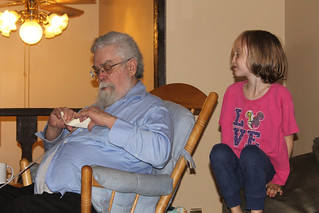 And just like every year, we have a dual birthday with Jack celebrating two days after Vivian. We took Jack and Donna up to Crescent, Iowa (taking the scenic route, of course) to have dinner at the Pink Poodle, just as I did exactly one month earlier. We got some chicken gizzards and livers to share, and then I got another tasty rib-eye while everyone else had thick cuts of prime rib, and Jack and Vivian even got cups of Pink Poodle ice cream after mentioning it was their birthday (something I neglected to do last time).

We headed home afterward for some warm brownies, courtesy of Vivian and her cast-iron skillet, and Jack got to open a couple presents as the kids played Feet Fight, including some actual pork loin (for some Octoberfest schnitzel).