We’ve been taking advantage of some lovely fall weather over the past week or two, taking in as much autumn fun as we can before winter hits. I also got to hang out with Bernie Sanders on Friday and then Ben Sasse on Saturday, so I guess that makes me bipartisan. 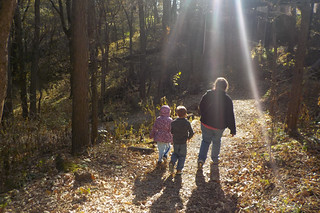 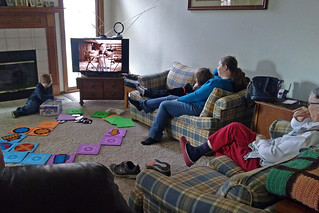 We had a quiet weekend last week, taking the kids for a long walk through Fontenelle Forest to get some fresh air and take in as some of the remaining fall colors before all the leaves were gone. The relatively bare trees gave us a nice view of the river in some spots and even a glimpse of downtown Omaha. The kids got to play on the playground for a bit as well before we were done.

Then on Sunday, we went to my parents’ house to let the kids watch the Wizard of Oz for the very first time. I’d seen the classic MGM film multiple times growing up, but seeing it through the eyes of my kids for the first time was a fun experience for everybody. (And having subtitles let me understand some of the lyrics and dialog for the first time as well.) 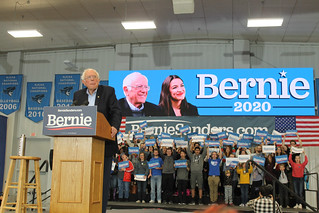 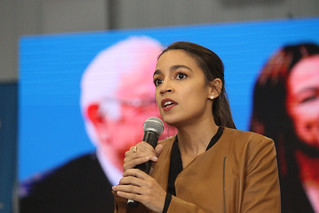 On Friday, Bernie Sanders paid another visit to Council Bluffs for a rally, bringing with him fellow socialist Alexandria Ocasio-Cortez (AOC). The crowd of young, white, and rainbow-haired leftists seemed to be more eager to see her than the man running for President. Three musical acts preceded the politics — a lady playing a ukulele (while singing about “my body my choice”),  “Democratic Socialist Songsmith” Neal Francis and his funky band from Chicago (who were surprisingly good), and an eccentric banjo player named Adrian.

A few local politicians spoke before bringing out AOC, who seemed to be able to work the crowd up to a frenzy as she alternated between sitting and walking about the stage to introduce Sen. Sanders. The two politicians are half a century apart in age, but that gave them an interesting chemistry as they took turns exulting the values of socialism to a very friendly crowd. There were apparently over 2,000 people in attendance, but I managed to get a spot at the front to shake hands with both Bernie and AOC when they wrapped up and walked the rope line. I even asked them both if they would appear on the Ben Shapiro program. (Neither of them responded with much enthusiasm.) 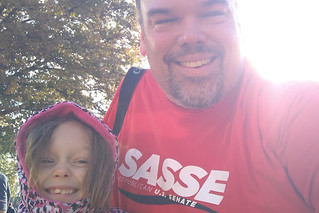 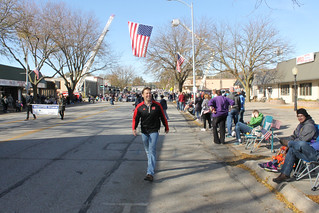 The next morning, Hannah and I both got to walk in a Veterans’ Day Parade with Nebraska Senator Ben Sasse. Vivian and Aaron were at a friend’s birthday party at the time, but Grammy was able to give us a ride to Olde Town Bellevue so we would meet up with the rest of the Sasse team. Don Bacon’s crew was also on hand (sans Bacon), and we walked between them and (Democrat) Carol Blood along Mission Avenue. Hannah got to ride in our little wagon and toss candy to some of the kids lining the streets.

The whole route was only around one kilometer in length, so it was over fairly quickly. Sasse stuck around for just long enough for a photo or two before vanishing like a ninja. Then Hannah and I walked on back along the route back to where Grammy was stationed outside the Dairy Queen, watching the rest of the parade pass by along the way. Once it was over, we got some ice cream together before heading home. 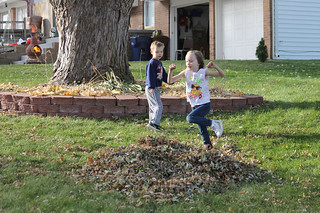 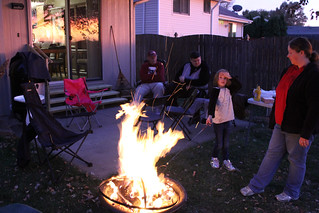 The weather was lovely for the rest of the day, so we got the kids outdoors for some fun diving into a pile of leaves. Hannah also decided to build a makeshift shelter in the backyard where she could hang out with our neighbor friends on the other side of the fence. (And went it got too cold to be outside, she made a hammock in our basement.)

Then that evening, we brought some hot dogs over to my parents’ house and cooked them over their fire pit as the sun went down. My dad and I brought along enough makeshift firewood from fallen tree branches and debris to keep the fire going for an hour or two after the sun went down. There’s nothing quite like a fire to bring people together.

My brief encounter with Bernie & AOC