We made it to the end of October at last! That means finishing the rest of our garden tomatoes as actual snow starts to fall around the Omaha area for the first time this season (and probably not the last). 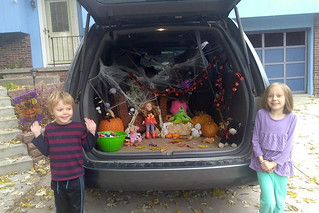 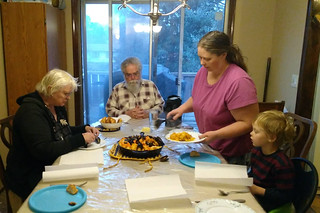 Our Halloween celebrations started on Tuesday as Grammy and Pop-Pop came over. Hannah (fresh from her new hideout) and Aaron helped Grammy decorate the back of her Honda Passport with some pumpkins, spiderwebs, and a few of their toys to create an adorable Halloween display for Wildewood’s Trunk or Treat event.

In the meantime, Vivian and Pop-Pop made some paella for dinner, which we all ate together in celebration after the trunk was ready for treating. 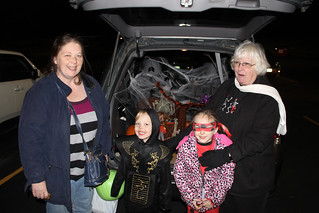 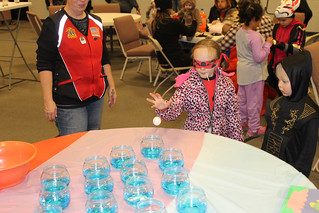 Then on Wednesday, we braved some chilly weather in the 30s with the kids to have some trunk-or-treating at Wildewood. Hannah and Aaron went as Miraculous’ Ladybug and a Ninja Warrior, respectively. We went inside to have some burgers and chili dogs for dinner along with a couple hundred other folks, including our friends the Lenarts. Then once we had enough warmth in us, we braved back outside to tour the variety of cute and monstrous trunks opened up with candy. I think my favorite trunk (aside from Grammy’s) was the giant purple monster, but the best costume was three ladies who came as cafeteria workers, dishing up candy with ladles, no less. One trunk came with a gas-powered fire for us to warm up by, and the final trunk had an entire obstacle course based around Genesis 1, ending with an apple tree of treats (and rubber snakes). I guess that’s one way to celebrate the Fall.

We warmed up inside a bit more with a few carnival style games, which involved blowing sailboats with straws, tossing footballs (and toilet paper), and bounding some ping pong balls. The kids walked away with giant buckets full of candy, which would be filling up again the n ext day as well. 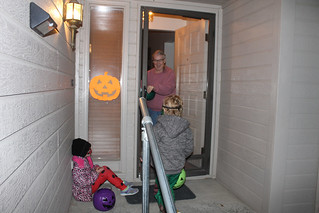 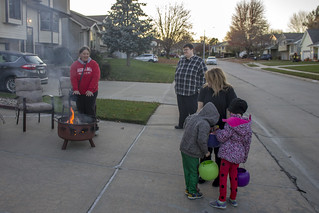 All Hallow’s Eve was a bit warmer the next day. Vivian and the kids spent some time decorating pumpkins to leave by our doorstep, along with a couple mounds of pink cobwebs to greet our visitors. Vivian baked a lasagna for dinner, which we ate before getting the kids dressed for some Halloweening in our neighborhood. Aaron switched costumes to be a Ninja Turtle, after finally finding his mask. We walked the block around my parents’ house with Uncle Jonny collecting candy from a handful of neighbors, while Jack and Donna watched our door a block over until we returned. A number of our neighbors had fire pits out to keep warm during the evening, and I’ll have to try hauling ours out one more time before it starts snowing again.

It was a lovely, busy couple of days — now we just have to figure out what to do with all of our extra candy.