Christmas is almost here! That means we have only a few days to check a few more traditions off our Christmas list, including sending out a much belated Christmas letter (with a fresh family photo). 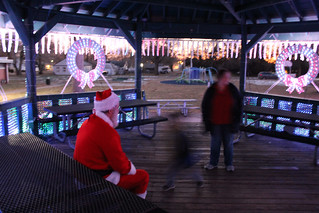 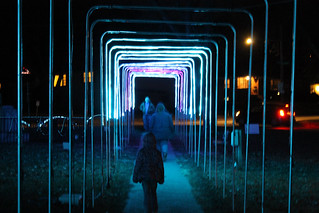 On Saturday night, we decided to take a tour of some of the lovely Christmas lights in our area. We have a very festive house up the street that seems more crowded every year with illuminated Christmas statuary. We also took a trip up the street to Wood River Drive, which was lit once again this year but sadly lacking a candy-cane bearing Santa (who was sick, according to a sign).

The most impressive display we saw by far was Washington Park in Olde Town Bellevue, which had dozens of multi-color LED displays set up throughout the park, all timed with music that was playing throughout the evening. The park even had its own Santa sitting in the pavilion waiting to greet us, though he didn’t stick around long enough for a proper picture. I took plenty of photos of the park, but still images can’t do it justice — you have to visit it yourself to get the full experience (or maybe play my video below). 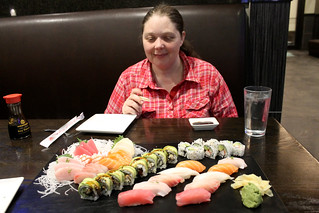 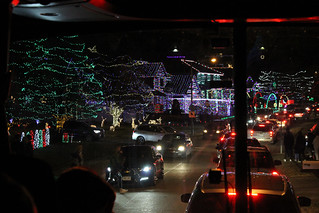 Then on Sunday, Vivian and I celebrated our 13th First Date Anniversary a day early so we could in on the last holiday light bus tour of the season. First, we dropped by Hunan Fusion, celebrating our sushi anniversary a month early with some tempura appetizers and sushi for two. We drove down to Oak View Mall and boarded our bus for a two-hour tour of Christmas lights in West Omaha. We drove through Linden Estates, Arbor Oaks, and Champions Run, criss-crossing streets around Dodge and Blondo to see various streets and houses lit up for Christmas.

We passed a few familiar streets we’d seen in years past but got to tour many we haven’t. The most impressive street by far — and the most crowded — was Larimore Avenue, which had cars backed up for blocks inching east and west down the street. It was a seizure-inducing party somewhere around 135th street, with houses on both sizes all decked out like the Griswolds. Santa and his elves were even on hand to greet those who abandoned their cars and decided to take the street by foot.

The trip was more fun than I expected, since we had a driver to navigate the streets for us while Vivian and I were both able to sit back and enjoy the lights. I even made notes of the streets we took so we could potentially retrace the route with the kids. We just have to be prepared for the long crawl of Larimore — and get everyone a bathroom break beforehand.