The Johnson Family got to enjoy a fun four-day weekend here in Omaha doing all our traditional favorite Thanksgiving things — eating too much food with family, seeing Santa at Union Station, and decorating for Christmas. I also got to meet Joe and Jill Biden right before he went viral for nibbling her finger. 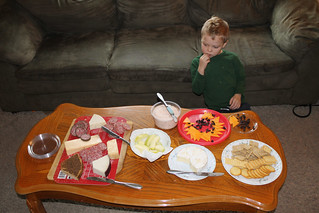 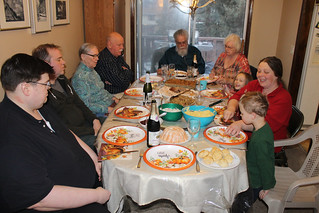 We kicked things off on Turkey Day watching the Macy’s Day parade before breaking out the hors d’oeuvres — and for the first time, Hannah and Aaron were both interested in watching. I also kept the kids distracted by introducing them to Minecraft on my Raspberry Pi. They immediately fell in love getting me to build underground “houses” for both of them with tunnels and paths connecting everything together.

Jack and Donna came over to help get Thanksgiving Dinner ready in the meantime, and my parents and brothers joined us after that to dig in later that afternoon. We had all the traditional foods, from Taber Salad to Pumpkin and Pumpkin Pecan pies for dessert. Other than loads of dishes to do afterward, it was a nice, quiet holiday — something I’m quite thankful for. 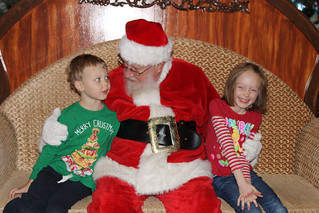 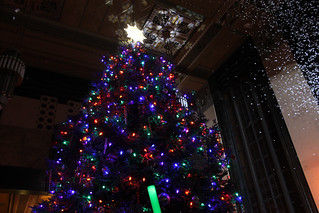 It was cold and rainy on Friday, so we stayed inside drawing and doing laundry for the most part. Then that evening we made our annual pilgrimage to Union Station to see Santa. Grammy and her confectionery crew were decorating cookies again, and Vivian and I got to take the kids on an extensive tour of the trains and activities downstairs. A traveling exhibit had some political memorabilia that include Joy Villa’s famous Trump Dress, and while they kids liked the model trains and old trains and trolleys on display, they gravitated toward a magnet board and set of toy trains for a good portion of our visit.

Then upstairs, the massive crowd pressed in for some caroling with Camille Metoyer Moten following by a tree-lighting with Mayor Stothert. We saw a few other familiar faces during our visit, including the other Johnson Family and the Mathis Family. I’d hoped for another nice Christmas picture with the tree but had to settle of a quick selfie instead as one of our kids was too tired to stay much longer. 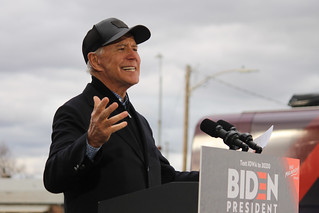 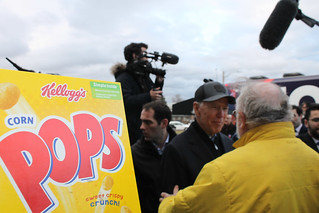 Then on Saturday, Joe Biden came to Council Bluffs to kick off his “No Malarkey” bus tour — getting some viral coverage for a painfully outdated slogan and nibbling his wife’s finger, among other things. It was a remarkably small crowd for a former VP and front-runner, with only around 100 people in attendance (in my vague estimation). A few regulars showed up as well, including Tom Becka, Fake Security Guy, and AP photographer Nati Harnik. After a few words of introduction, Dr. Jill Biden took the stage with her husband Joe to introduce him.

Then Joe stood up to give a very brief, ten-minute stump speech before working the crowd for around half an hour more. As with his last visit, he stayed to meet and greet just about everyone who wanted to say hello. Several people wanted autographs, and I brought along a box of Corn Pops hoping he’d sign it (if you don’t get it, watch this). Unfortunately, his staff took the box away and though he wound up not signing the box, I did get the cereal back.

I didn’t pay much mind to Biden’s speech itself, but I enjoyed seeing him interacting with attendees, even taking a phone call with someone’s grandmother who wasn’t able to attend. I’m not sure why the crowd was so small — folks could have been turned away by the cold and cloudy (and somewhat rainy) weather or busy with Thanksgiving weekend, but the vibe I got was that Joe was past his prime and folks were looking for someone younger and fresher for the nomination this time around — someone who doesn’t use words like “malarkey.” 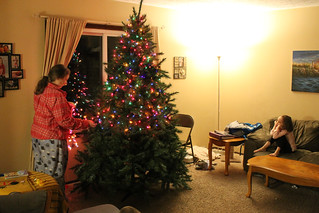 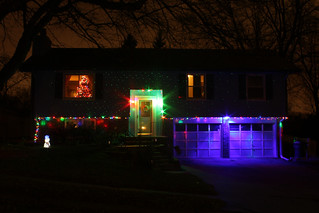 I also spent some time putting up our Christmas decorations during the sunnier moments on Saturday. Then on Sunday Vivian and I put together the tree and our house a bit more ready for Christmas. That included setting up the tree and breaking out Santasaurus and a few of his friends. Even Hannah got into the act with her Calico Critters decorating their own house.

We have a very short season this year, but putting anything up before Thanksgiving still felt wrong, so we had to get the house a bit more festive before the weekend was over.

Let’s get this holiday started!