The Iowa Caucuses are finally being held today, so it might be worth a quick look back at a busy, busy week in Presidential politics if you happened to be living within a stone’s throw of Council Bluffs, where we had a candidate visiting pretty much every day of the week (some of whom I missed, such as Amy Klobuchar on Tuesday and Joe Biden on Wednesday). 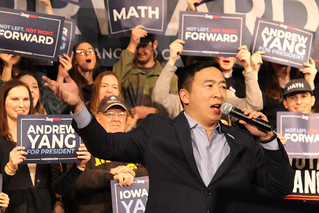 First up was Andrew Yang, who held a rally with around 300 at Abe Lincoln High School on Monday. Our friend Nate had wanted to visit either Yang (or Tulsi — the two sanest Democrats running, IMHO) before the primaries started, so he came along with me to hear what he had to say.Yang was introduced by a few local Democrats and then his wife Evelyn before taking the stage in front of a very friendly crowd, which happened to include Alex Wagner from Showtime’s The Circus. As before, the focus of Yang’s stump speech was on helping workers displaced via AI technology through his “freedom divided,” and I found his keen focus on the economy to be what set him apart from his more socialist-leaning competitors. He took a few questions afterward, including one from a woman whose sister died of an opioid overdose (who Yang also called up front so he could give her a hug). He stuck around afterward for a quick series selfies with everyone who came (including me, of course), and I had the chance to thank him for appearing on the Ben Shapiro show — and that both sides need to listen to one another. 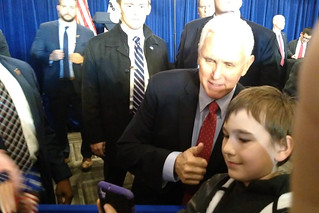 Then on Wednesday, the Vice President himself paid Council Bluffs a visit on his way to a rally with President Trump in Des Moines. Nate’s son Jake had expressed interest in meeting President Trump, which I told him was a tall order. A meeting with the Vice President, however, was far more doable. The event was held at the Thunderbowl’s Gathering Room, which was a fairly small venue, so we showed up around two and a half hours early to help ensure we got good seats (in the second row)! The Fox News Channel was among the media there to cover the VP’s visit, along with a handful of local media and even Turning Point USA’s Charlie Kirk, who came with the motorcade. There was an opening invocation and a recitation of the pledge of allegiance before Iowa Governor Kim Reynolds took the stage to introduce the Vice President. 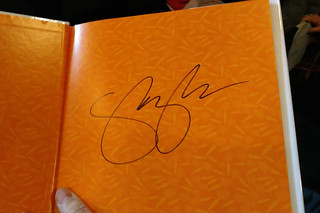 I’d seen (and shaken the hand of) Mr. Pence three times before, but this was the first time I’d been allowed to bring my good camera with me, so I happily snapped photos as the VP gave a brief stump speech highlighting Veterans’ issues and the economy. The real excitement happened in the moments afterward, of course, when Jake and I were quickly able to make our way to the front to meet the Veep himself. Jake was easily able to get a handshake and a selfie with Pence. I brought along a copy of A Day in the Life of the Vice President, a book written and illustrated and Pence’s daughter and wife, respectively, which Pence seemed very happy to autograph for me when I asked.

Among the familiar faces in the crowd were the Halliburtons — David, Mason (the Button Boy), and Haley — who had met the Veep multiples times before but this time brought previously-snapped photos of themselves for him to autograph. We stayed just long enough to watch the motorcade make its way out of town before heading home. 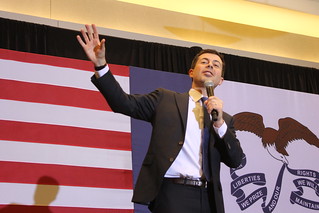 The last Presidential candidate to visit Council Bluffs before the Caucus was Mayor Pete Buttigieg, who held a rally in Ballroom-B the Mid-America Center. Since I’d gotten to see the first candidate visit more than a year ago, I thought it was nice to be able to see the last one as well.

He gave a stump emphasizing the need to bring Democrats, Republicans, and moderates together while also stumping unapologetically for abortion and criticizing Christians for being too selfish to sign onto his social welfare programs. I only stayed long enough to snap some pictures and rub elbows with a few other familiar faces before watching the 2020 Caucus draw to a close. 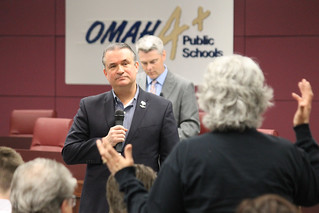 Then on Saturday, I was up bright and early to attend a nine o’clock town hall with Don Bacon. He’s held more than a dozen of these since taking office in 2017, and as always it drew people from both sides of the political aisle. The left-leaning members of the audience asked questions about climate change and the impeachment, the latter of which seemed a sore spot as the Senate had just voted to draw their proceedings to a close. The event was moderated by KFAB’s Scott Voorhees, who kept things moving along even as some members wanted to ask more than their share of questions — some of which got heated as one guy spontaneously started screaming out of turn. Even though things got heated, the Congressman stayed cool. When accused of voting to end Obamacare with no replacement, he pointed out that he had, in fact, voted for the AHCA, and when one audience member accused Trump of soliciting a bribe, Bacon pointed out that bribery should have been included in the articles of impeachment in that case — and it wasn’t.

I mostly enjoyed the back-and-forth, and at the end of the event, Congressman Bacon said, “Agree or disagree… we’re all Americans.” I’m glad we live in a country where the folks in power — whether a candidate, a Congressman, or the Vice President — are so easily within reach of a nobody like me living in Nebraska. I just hope the Iowa Democrats didn’t screw up their Caucus so badly this year that they’ll pick another state to go first in 2024.