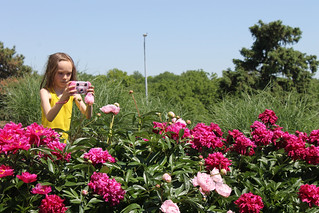 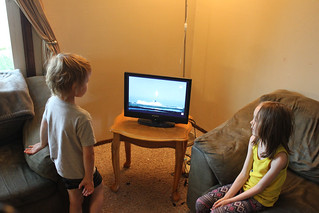 We had some gorgeous weather over the past week that made for some extra time outside with the kids ahead of the oppressive heat of summer coming right around the corner. On Friday afternoon, we dropped by Memorial Park again in time to see the peonies blooming (as they are at our house). Hannah had her camera out and was snapping just as many pictures as I was as we walked about (and climbed a tree). Then that evening, I stopped by Johnny’s Cafe and picked up a pair of “TV Dinners” they were selling. I’d wanted to to find a way support my favorite Omaha restaurant ever since everything shut down for the pandemic months ago, and a couple meals of chopped steak with mushroom gravy seemed like a nice idea (which we ate while watching Brain Donors).

Then on a lovely, rainy Saturday, we tuned our Raspberry Pi over to the SpaceX shuttle launch, watching the lift off more or less live along with the rest of the world. We brought the kids out to watch along with us in hopes that they would remember the historic moment. 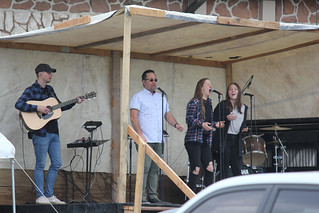 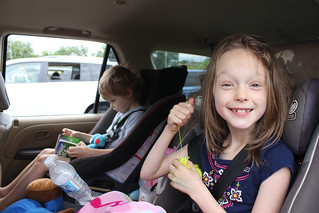 On Sunday, we celebrated Pentecost by attending a drive-in church service at Bellevue Christian Center once again. We were getting a bit tired of having church live-streamed at home every week, and it felt good to get out of the house for an in-person worship service, even if it was in our car. Pastor Andy’s message was focused on some of the civil unrest going on around the country, even here in Omaha, and he brought up Pastor Hooker for a joint prayer for peace at the end. 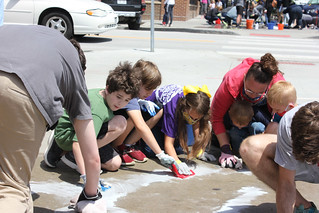 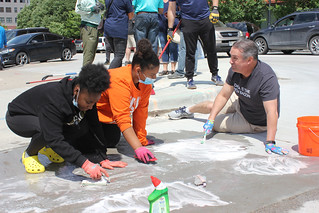 Afterward, I headed downtown to see some of the aftermath of the rioting that happened on Saturday night. I was somewhat surprised to find downtown was fairly crowded with hundreds of people there to do volunteer clean-up work. There were folks spraying and scrubbing graffiti off buildings and sidewalks, and lots more cleaning up broken glass from broken windows and boarding up windows. One guy by the courthouse was handing out bottles of water to volunteers, and saw men wearing an NRA hat and a BLM T-shirt both helping in the cleanup.

I eventually found myself in the Old Market, where I bumped into Don Bacon and his brigade, who were cleaning up at the corner of the Hollywood Candy shop. Strangely enough, volunteers for Kara Eastman, who’s running against Bacon, showed up to scrub the opposite corner (though Kara herself was nowhere to be found). By some coincidence, our friends the Mills drove by a few minutes later, just looking to help wherever they could. The owner of the Hollywood Candy shop came out with fudge to thank everyone for their help shortly before we were cleared out, as another “protest” was allegedly gearing up. I saw a glimpse of some left-wing nut-jobs raising their fists a few blocks away near the Hive Bar down the street, where the owner apparently shot and killed a protester in self-defense. 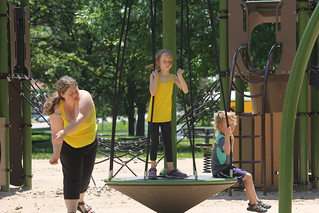 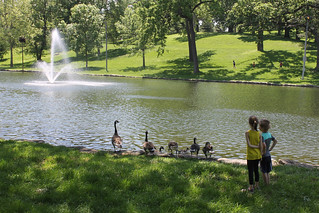 On Monday, the playgrounds at Omaha’s city parks were supposed to be open again to the public, so we stopped on by Hanscom Park with the kids for some noontime fun. We’d visited the park twice before during the Pandemic but couldn’t wander far beyond the “twisty tree” to the playground by the lake, where the kids had some fun playing after having some burgers for lunch. We also took a nice walk along the little pond and fountain, getting close to a few geese hanging about. Hannah and Aaron both found goose feathers left behind, and we even kicked off our shoes to dip our feet in the water together. It was a lovely day for a park visit altogether, particularly before the oppressive summer heat starts ramping up.