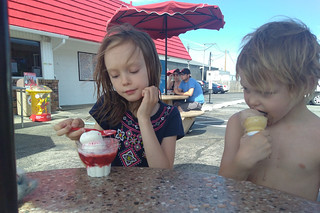 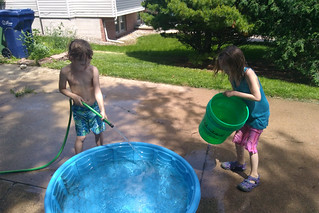 With temperatures in the 90s pretty much every single day (with barely a drop of rain), we’ve been trying to keep cool in all the standard ways. We broke out the wading pool, which Hannah had been using as a makeshift tree house, and filled it up with a garden house as I got the sprinklers going. We also dropped by the Papillion Dairy Queen to make use of a Groupon Hannah got in exchange for watching the Mills guinea pig. 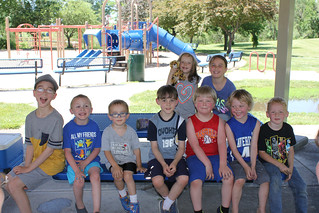 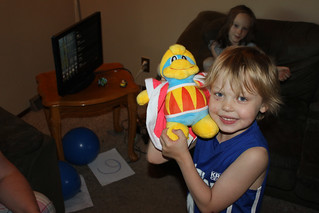 Then on the following Thursday, we celebrated Aaron’s sixth birthday. I took the entire day off from work, giving me the chance to help Grammy pick up a pop-up tent for a potential summer camping trip and to snap some pictures when she brought over Aaron’s cake along with a couple of presents.

Then that afternoon, we had a party for Aaron’s with a bunch of his little friends down at Eagle Ridge Park. We had been hoping the neighboring splash pad would be turned on, but it wasn’t — the only water we had came in the form of a large, stagnant puddle (which the girls waded in anyway). Aaron still had fun just running around with his little friends at the park, however. We had some of Donna’s cake halfway through, which was decorated with some characters from Aaron’s favorite video game. We opened presents afterward, which included a bunch of Mario Kart toys that Aaron and his crew immediately began racing with. Hannah and Sammy dug a tunnel in the sand in the meantime, and we finished off the day getting pictures of everyone inside of a comic book picture frame.

Then that evening, Aaron got to have his favorite dinner, chicken wings and french fries, before opening a few more presents. One of these was a plush King Dedede, which happened to be Aaron’s favorite video game character of the moment. 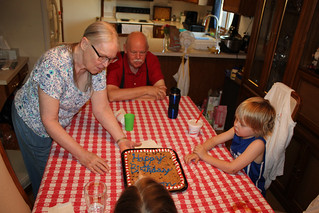 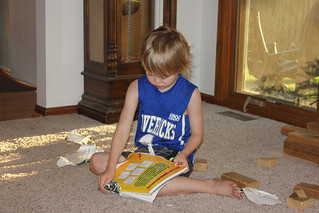 The next day, Hannah and Aaron discovered the Legos that were in some of the extra gift bags we had from the party, immediately building a number of tiny structures with them (and asking me to photograph).

Then that evening I walked Hannah and Aaron over to Grandma and Grandpa Johnson’s house for a post-birthday dinner with them and Uncle Jonny. The kids got to spend some quality time playing with grandpa’s old blocks, and then my folks treated us all to a feast courtesy of Sonic, followed up a cookie cake. Afterward, Aaron got to open his presents (wrapped with in dancing monkeys wrapping paper he almost didn’t want to tear) — a pair of books of mazes, which quickly became his new favorite books. We finished off the evening watching a bit of Quarantine Tonight, which is some kind of variety show filmed out of Norfolk on channel 27-2. 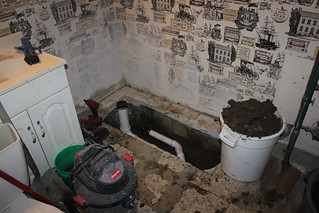 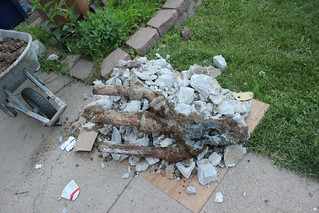 In the meantime, our basement was undergoing some demolition work. We’d found a leak coming out of our basement floor under the toilet when I ran the dishwasher upstairs, which a plumber told us came from a broken pipe underneath the cement. He spent a good portion of Friday evening while I was at my parents’ house with the kids tearing up a couple square feet in our basement. After this, he replaced a giant section of cast-iron drain pipes with new three-inch PVC, covering it all back up with cement afterward.

It’s been a bit of a harrowing mess, but we now have water flowing out better than ever before — and a functioning toilet once again! I’m mostly thankful not much more damage had been caused by the leak in the meantime.