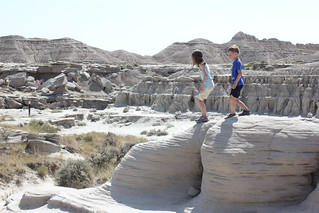 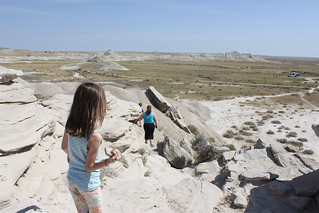 On day three, we hit the road to see Toadstool Geological Park up in the very northwest corner of Nebraska. It was like being dropped from an endless, grassy prairie into the middle of a strange, desert landscape. We followed a series of numbered posts through the various rocky structure that looked a bit like another planet, and it was hard to keep the kids from using every sloped rock as a giant, sandy slide. In addition to the strange, mushroom-like rock formations, we also found some 30 million year old rhino tracks, which were embedded into the rock.

The weather was around ninety degrees, but so dry that it barely registered, and when we were done with our little hike, we got to take a bit of the sand hills with us on our way out. If you ever make the same trip, be sure to top off your tank in Chadron. We were driving on fumes all the way to Hot Springs without a gas station in sight. 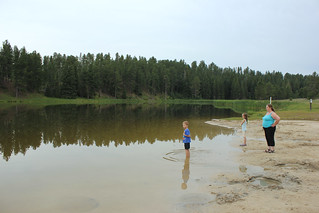 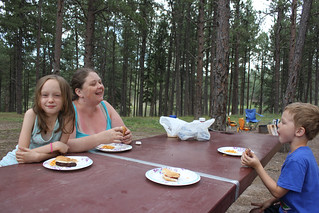 Before long, the landscape changed again into vast rolling hills covered with pine trees as we entered the Black Hills. We stocked up on some food before heading to our campsite at Roubaix Lake, a lovely little campground about 40 minutes north of Mount Rushmore. We grilled up some burgers for dinner before letting the kids walk down to the lake to wade a bit and look for frogs. There were a bunch of tiny purple daisies blooming along the paths as well, which Hannah picked for all of us (and her stuffed toys). The weather was mostly perfect, though a thunderstorm managed to roll by just as we were finishing up our s’mores for the evening. Fortunately, we were ready for bed anyway, and our tent proved to be dry and water-tight, which made falling asleep to the pitter-patter of raindrops even easier.

One other note: the Black Hills are definitely “Trump country.” Everywhere we went we found little pop-up “Trump shops,” which may have opened just for the President’s visit to Mount Rushmore last month, but were still sticking around with Trump memorabilia for sale.