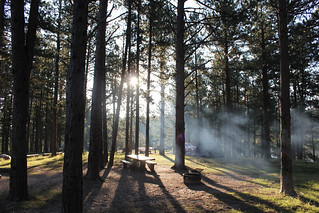 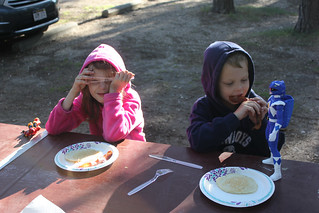 On Wednesday, we got up with the sun and had a lovely breakfast of bacon, potatoes, and pancakes cooked over hot coals. Every morning waking up in the forest has been lovely, with the sun streaming through the trees the smell of pine in the air. The kids — when we pry away their electronic toys — have also been enjoying exploring the area around our campsite, finding mushrooms, bugs, and especially unusual rocks, which Hannah seems to be collecting. 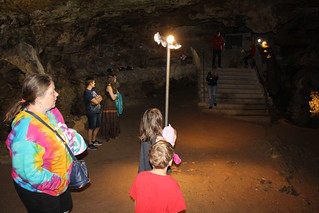 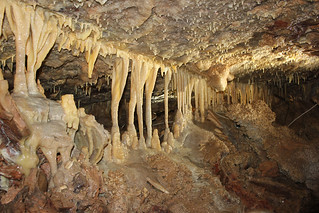 After breakfast, we headed a ways down the road to Wonderland Cave, a place advertised with enough signs on the highways that it nearly rivals Wall Drug. The cave is located much further away from our campsite than all the signs would imply, much of which had to be traveled via unpaved roads winding up into the steep hills.

The cave itself was first mined back in the 30s in hopes of finding gold. Instead, it contains many layers of damp limestone and “flow rock” that have dribbled into stalagmites, stalactites, and columns over the centuries (into formations that looks quite a bit like snot). It was a lovely 47 degrees down in the mine after we headed down 100+ stairs (which Aaron counted), and we got a good look around via our helpful tour guide before eventually heading back to the surface. 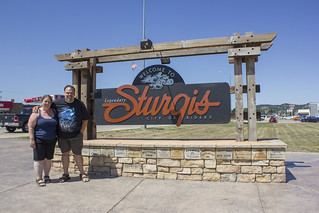 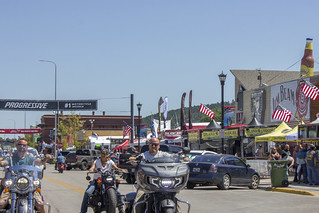 Upon checking the map, we discovered we were just a few miles away from Sturgis, which was a few days’ away from kicking off its 80th annual biker rally, so we decided to stop on by just to say we’d made the trip (encountering a stray cow along the way). It was a surprisingly small town with several main streets decked out with shops and stands preparing for an influx of bikers with swag and merchandise.

We were tempted to stop and get T-shirts but instead grabbed lunch at Taco John’s and borrowed their WiFi long enough to find a place to change the oil in my dad’s Highlander, which had announced to us that it needed one. 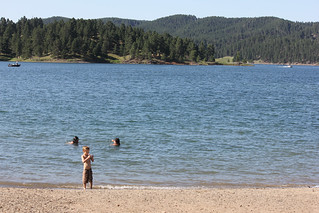 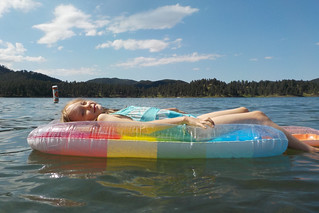 We headed back down I-90, 44, and 385 to get to Pactola Reservoir, where we spent a little time in the water with the kids. It was much quieter than Sylvan Lake, and much, much larger (albeit with no rocks to climb on). The lake bottom was all rocks, however, so we put on a few water shoes before going on. We also blew up the kids’ flotation devices so they could float about on the water together. We also encountered a couple ducks who were none to shy about getting close and begging for Cheetos. I brought along my waterproof camera to snap some photos in the water, and Aaron decided to try it out to get some photos of his own before we were done. 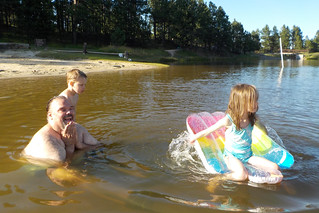 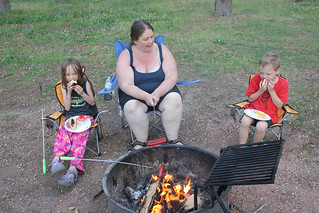 Back at the campsite, we walked down to Roubaix Lake to swim a bit more before changing out of our swimsuits. Vivian had some special Camping T-shirts for the kids to wear, which they both changed into once we were done in the water. Then we cooked some hot dogs together over the fire, along with some s’mores before going to bed one last time in our tent together.