On Thursday morning, we said goodbye to our lovely campsite with a big breakfast of spam and eggs before packing things up. We then headed down to Rapid City, where I let the kids have some quality playtime at Storybook Island while I got the Highlander a quick oil change. 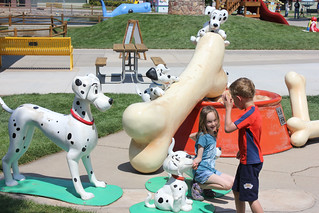 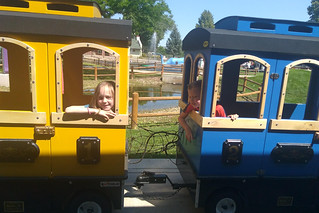 Storybook Island is an adorable little amusement park on the west side of town, and completely free (with donations requested) thanks to the local Rotary Club. They have dozens of little playground exhibits modeled after various fairy tales and nursery rhymes (with an extra heavy Disney influence, of course). Hannah and Aaron got to ride a train, go on some swings and slides, ride a carousel or two, and explore just about every exhibit, from Pinocchio to Cat in the Hat. It was a nice little place to let the kids explore before heading off on I-90 for a while, and I’m glad we stumbled upon it. 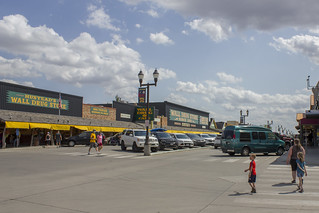 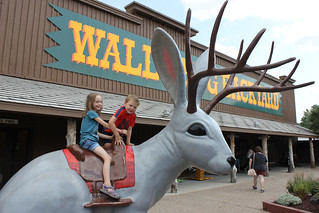 We drove east for an hour and made a stop at Wall Drug (passing about fifty billboards for it along the way). Got filled up on free water and let the kids play in the sprayground and on the jackalope and bucking bronco for a bit. We also waited about ten minutes to hear a dinosaur roar and got a photo next to a cowboy Vivian had met eleven years ago. I was somewhat surprised to find an actual pharmacy among all the souvenirs and T-shirts, and I got a commemorative shirt before we left for the day. 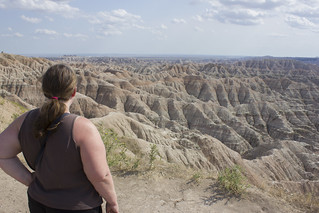 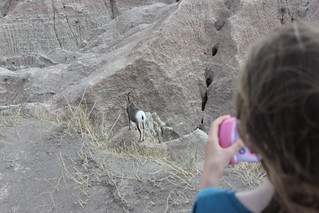 Our next leg of the trip took us through the Badlands, a detour that cost $30 at the gate but included a large amount of scenery and wildlife. We took a wrong turn and wound up at a vista overlooking miles of sandy, rocky terrain. At the very top of it all was a goat perched precariously on one of the peaks. (We’d passed a few of these creatures moments before thinking they might be antelope or mountain goats, but I can’t be sure of its exact species.) Hannah brought out her camera as well for several pictures, and I found it hard not to stop at nearly every scenic overlook we drove past, of which there were several. 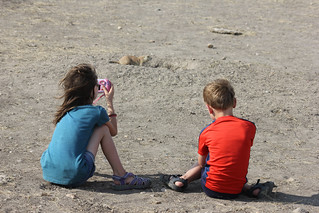 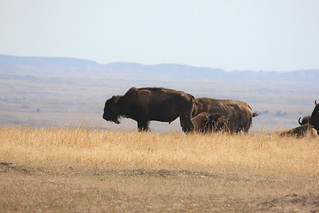 Our wrong turn took us to “Prairie Dog Town” next, where we all got to get a good, close-up look at these little critters. They didn’t do much actual parking, but there were dozens of them popping out of their little holes to get a look at us, some of which came right up to within a few feet of Hannah and Aaron. Then, right across the road, was a small herd of grazing buffalo. I kept my distance but snapped several pictures of them, thinking all the while of the song “Home on the range,” and wondering if we’d get to see some deer and antelope playing next.

We didn’t see any deer or antelope, but we did drive through an hour or two of winding roads through beautiful hills, painted in yellow or with red stripes through their various layers of sediment. We stopped a few more times for pictures but eventually had to hurry on back to I-90, where we had an extra hour or two of driving as we eventually left the state and headed south. 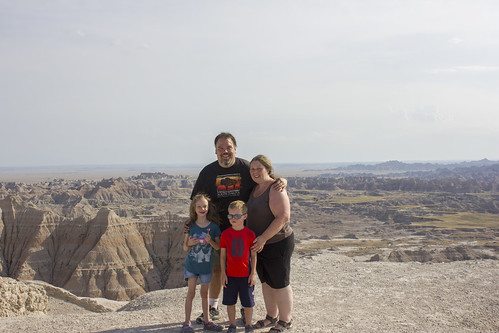