It’s been another fun and busy week, with some outdoor fun and a taste of cool fall weather — all sandwiched between visits from two members of the Trump family. 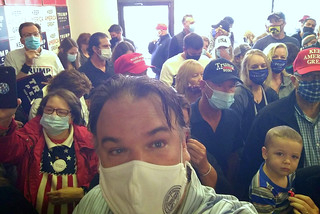 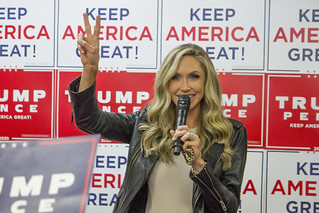 First up was Lara Trump, wife of Eric and daughter-in-law of the POTUS. She paid a visit to the Omaha campaign office for the Trump campaign, where about 150 people packed the tiny room off 125th and Center in the Westwood Plaza. She was introduced by former Bellevue mayor and legislature candidate Rita Sanders as well as Gov. Ricketts.

Mask usage was also in full force, with pretty much everyone who wasn’t holding a microphone properly covered with a face-diaper. When Lara arrived, she gave a half-hour stump speech for her father-in-law before getting a group photo with those of us in the room. There wasn’t any meet-and-greet time afterward, but one portly guy in a straw boater seemed to be able to nab a selfie with Mrs. Trump on her way out. 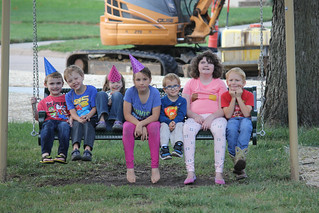 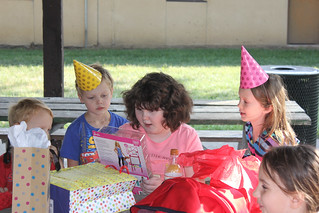 Vivian was on a women’s retreat most of the weekend, so I got to have some quality daddy time with the kids myself. Our first stop on Saturday was to celebrate our friend Lily’s 10th birthday down in Washington Park in Bellevue. It’s been cold, cloudy, and raining for the past several days, so things were especially lovely on Saturday once the sun came out. Lexi joined us with her kids and they all had fun getting sugared up and running around a while, playing on the playground, see-saw, slide, and the bench swing while the grown-ups chatted (about washing machines and routers, mostly). 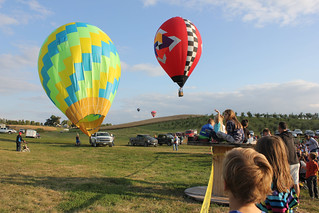 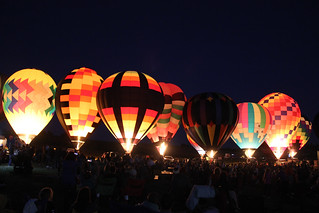 After the party, I headed down to Ditmars Orchard in Iowa for their annual Fields of Flight. It was supposedly a socially-distanced event, though you couldn’t tell by the size (and density) of the crowd. The kids still had a great time, playing with dozens of others on an ever-growing playground area (this year featuring a colorful maze). I pulled them over to the field when I saw the balloons blowing up and starting to fly away so they could get a good look. Then a little later, I got some apple cider donuts to coax them back when it was time for the balloons to return and glow.

Uncle Nathan came by to join us for some of the festivities as the fun went down, and the cover band Clean and Easy played a variety of songs for everyone to dance to. Aaron in particular seems to enjoy live music and took to the grass in front of the stage to show us his moves for a bit before we had one last swing or two and headed home. 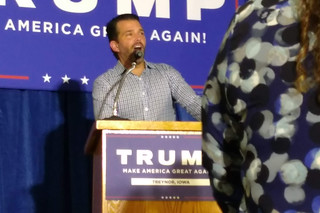 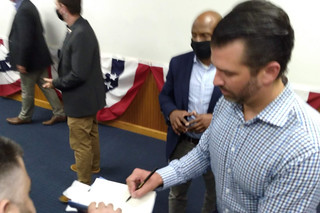 Then on Monday afternoon, Donald Trump Jr. held a rally for his dad across the river in Treynor, Iowa. It was a relatively small venue (particularly with the socially-distanced chairs)  that filled up quickly when I arrived. The room was filled with MAGA faithful both young and old, including Apprentice alumna Tana Goetz and a WW2 veteran who sat (and stood) up front. Local candidates Jon Jacobsen (state legislature) and David Young (House) made a few remarks before the son-of-a-POTUS dropped in around 2:30. Don Jr. gave a lively speech hitting on everything from the Netflix “Cuties” film to Russian collusion to the current civil unrest. “You’ll get into more trouble opening business to feed your family than you will by burning down someone else’s,” he said. He also had several jokes at Biden’s expense, doing a impression of the Democrat candidate at a teleprompter while hitting him on his fairly meager half-century record of public policy. “You can’t campaign on problems if you solve them.”

Don Jr. spent a few minutes after his speech working the rope line, signing autographs, and getting a few photos on his way out the door. Among them was by buddy Mason, whose dad brought previously-taken photos with Don Jr. for him to autograph. Others brought copies of Don Jr’s book, “Triggered” for him to sign, making me wish I’d picked up a copy myself. (I did get a quick fist-bump as he passed by.)

Fields of flight at Ditmars Orchard, 2020