I had a fantastic little birthday over the weekend, celebrating Life, the Universe, and Everything as I turned 42 — AKA the “answer.” What made it great were all the great friends and family I had to share in all the fun — and food. 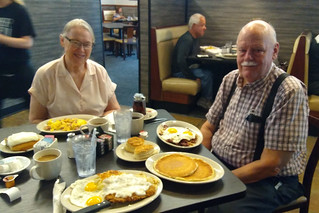 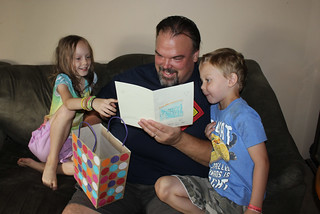 I started off my birthday having breakfast with my folks down at Summer Kitchen in Gretna. I’d gone to the Summer Kitchen in Bellevue a number of times (before it mysteriously closed), and found this one very much the same, enjoying some chicken fried steak and several cups of coffee while catching up with my folks. It felt like things were back to normal from the pandemic. The only difference now was a bulletin board full of sternly-worded Covid messages by the front door, which was just a bit off putting on our way to breakfast.

Then back home, Vivian and the kids had a handful of lovely little gifts and birthday cards for me — all hand decorated with images of pizzas and mazes and cartoon versions of myself and the family. I got a candy burger and a sleep shade from the kids, along with a lovely T-shirt and a gadget for connecting our car to my smart phone from Vivian. The T-shirt was a particularly nice surprise, as I wanted a nice, goofy shirt to wear for my birthday, and this fit the bill perfectly (especially for a CATurday). 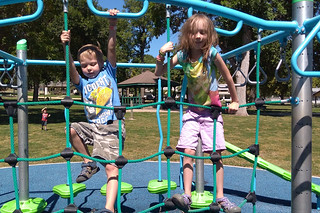 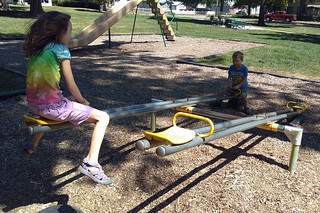 The weather had also suddenly gone from weeks and weeks of smoldering hot and humid weather to nearly fall-like 70s, so we took advantage by taking the kids down to Washington Park. We let them climb around and play on the teeter-totter while I had a lunch of fried mushrooms and cauliflower along with a banana split, all from Dairy Twist. The cool weather was heavenly after so many weeks of unbearable heat, and we could have stayed all afternoon, but I had more fun in store. 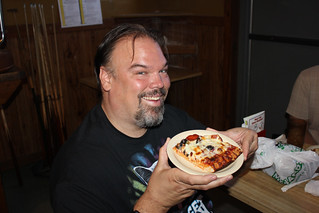 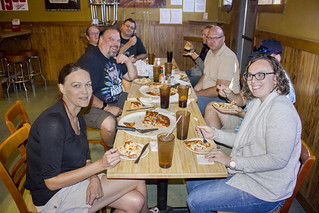 I decided to have a redo of my birthday back in 2014, namely heading down to Lincoln for some pizza at my favorite pizza joint, Big Sal’s. I’ve tried many other pizza places in Omaha and elsewhere, but I keep coming back to this little dive at 27th and Vine. Joining me were our friends Nate and Lexi, along with Phil and Jen, Jon Paper, and Jolene. Even my brother Nathan showed up, so we all enjoyed a combo, a Big Sal, and a Hawaiian pizza together. (Along with wings and chili cheese fries from Phil and Jen — who even knew Big Sal’s had those?) 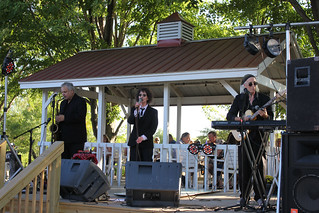 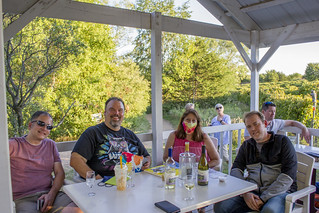 After dinner, we headed on up the road to James Arthur Vineyards in Raymond. They had an evening of live music planned with no cover charge, so naturally the place was absolutely packed. The weather was also absolutely gorgeous, with temperatures in the 70s that made for the perfect evening to sit out on the patio sipping wine (and a peach boba drink courtesy of Phil and Jen). They also had a live band — Tunafish Jones — coincidentally the same band they had when I celebrated my birthday here back in 2014.

We were able to claim the very last open table in the place and watched the sun set over the rows and rows of St. Croix grapes on the horizon. I even walked up to the top to watch the sun go down and the deer come out. Lisa was able to join us for the last bit of the evening, as were Nathan, Richard, Jolene, Phil, and Jen. Nate and Lexi somehow hid inside eating truffles most of the evening, but I caught up with them later and got a pair to take home with me. 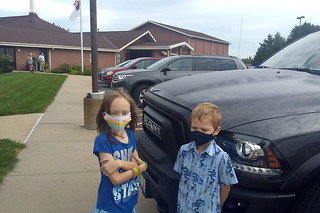 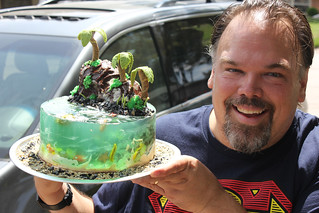 We still had things to celebrate on Sunday, not the least of which was the return of children’s Sunday School at Wildewood church. Vivian and I were able to get the kids out the door on time to participate in the kids’ activities that morning, something he hadn’t been able to do since March this year. It felt good to be back out and fellowship in person, though Vivian seemed to miss the “virtual church” we’d been able to do in our jammies instead.

Then that afternoon, Grammy came by with a birthday cake for me. This year, she created one with an ocean theme — with a chocolate layer cake sitting in a translucent ocean of blue gelatin. She was even able to put little sea creatures in the “ocean” itself. Naturally, when it came time to eat, Hannah and Aaron laid claim to various sea creatures they could see in the gelatin ocean.

The celebrating didn’t quite stop there, either. After the kids were in bed, Vivian brought up a large batch of ceviche, which she and I ate downstairs while watching Bill & Ted’s Bogus Journey (in preparation for the third installment of the franchise). 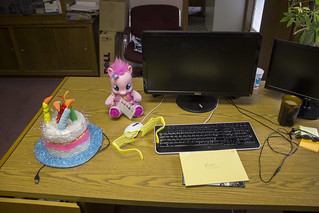 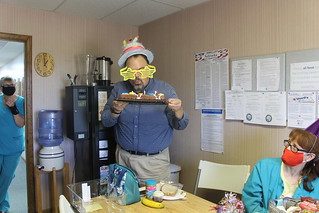 Then at work the next day, Dr. Keefe had our standard birthday surprised waiting at my desk — birthday banner, birthday hat (and sunglasses), and Pinkie Pie. There was also cake later, of course with candles I carefully blew out (which re-lit).

Dr. Keefe also had a gift for me: the book “Lost Restaurants of Omaha” by Kim Reiner, a book that coincidentally contains a few pictures I personally took at Venice Inn before it closed! The author had contacted me four years ago for permission to use them, which I’d given and since forgotten about. That was a very nice surprise. 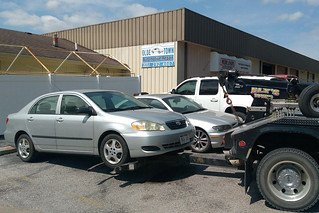 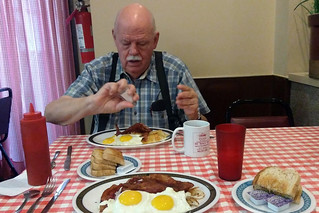 In other news, the starter went out on my car right before my birthday weekend, but I had so much fun on my mind that it barely registered. Instead, I managed to “make lemonade” of the situation and had another breakfast with my dad in Olde Towne Bellevue as the starter got put in on Tuesday morning. We went by the Downtown Coffee Shop (literally called the “Downtown Coffee Shop“) which was a cozy, hole-in-the-wall diner, perfect for bacon and eggs and coffee on a cool Tuesday morning.

It was a long, fun weekend, one I enjoyed celebrating not just getting older, but also spending time with some of the friends I’ve made on this journey called life. Now let’s see how year 43 goes!