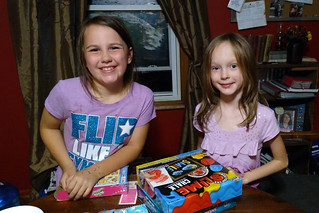 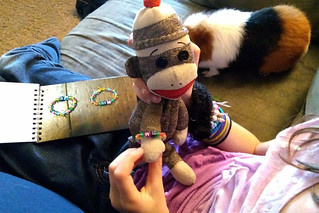 On Wednesday, Hannah and I dropped by the Mills’ house to have some beef lo mein and celebrate Sammy’s 9th birthday. Hannah and Samantha have been little friends since they were babies, so this was an annual reminder of how fast they’re growing up. We also had plans to celebrate Sammy’s birthday on Saturday, but we still got to have some cake with her and give her a few presents on her birthday itself.

After we left, Hannah discovered that she’d left her toy sock monkey behind — a toy she’d had since she was a baby. The next day, Lexi brought the monkey back with a few surprises — including a photo album showing all the fun things the sock monkey got to do during its “sleepover” at Sammy’s house, which included making friendship bracelets with Sammy’s own sock monkey. That was adorable. 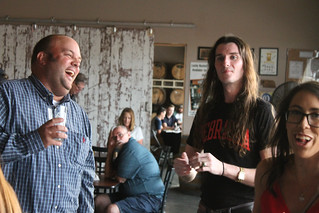 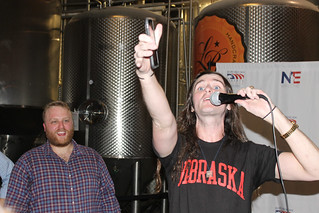 On Friday, things got political for me again (and not just because of the passing of a “notorious” Supreme Court justice). Scott Presler, Trump advocate and Twitter “influencer” came to town (known for his long locks and Tucker Carlson impressions), courtesy of the Republican Liberty Caucus, and we got to have a meet-up and “pep rally” with him at the Lucky Bucket Brewery. We had a handful of local politicians in the crowd, including the La Vista Mayor Douglas Kindig, legislature candidates Jorge Sotolongo and Rita Sanders, and former State Senator Mike Friend.

Scott himself took the mic before long and gave a brief stump speech on how he came to be a Trump supporters — much of it coming at the top of his lungs. The crowd was very friendly, though I also noticed some on the populist right embrace some of the same “in your face” coarse language that I’ve also seen on the populist left. Scott stuck around for over an hour afterward meeting and greeting guests and getting pictures with just about everyone in attendance (including me, of course). It was the kind of rally I like, where folks can just talk about issues over a beer (or chicken tikka tacos) like normal people. 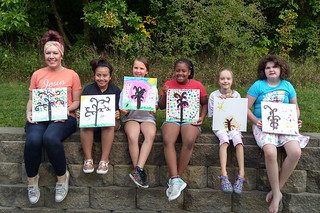 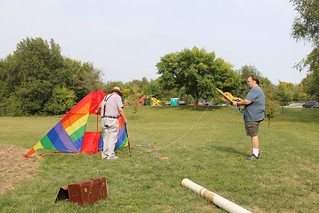 On Saturday (after setting up a new mesh WiFi router at home), we celebrated Sammy’s birthday down at Swanson Park around the corner from our house. It was a cute, girly paint party, with an adorable painting cake from Donna to go with it. Each girl got to paint their own pictures on canvas, and some of Sammy’s presents included an art teacher Barbie with a painting easel.

I had been under the impression that Aaron and the boys would need to be distracted during the painting time, so my dad and Uncle Jonny came by to try to fly a kite in the meantime. Aaron had more fun just running around with his friends, however. In any case, the trees surrounding the park proved be a formidable wind-breaker that kept any meaningful gusts from getting our kite aloft, so it’s just as well. 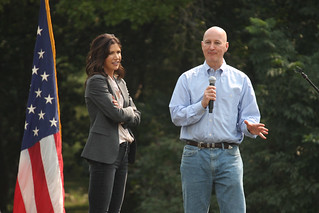 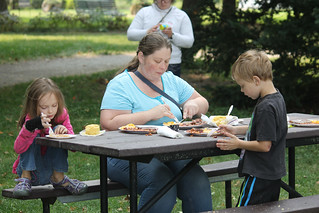 Then on Sunday, we had a big, fun afternoon down in Nebraska City for Gov. Ricketts’ fourth annual Steak Fry. It was the perfect day for lunch outdoors in the Arbor Lodge State Historical Park, and they had a handful of activities for the kids including bubbles and play-doh (which kept them busy as daddy went off to snap some photos). Ricketts’ special guest this year was South Dakota Governor Kristi Noem, who’s become a bit of a rockstar during Covid, mostly for not locking down her entire state and doing fine anyway (even hosting Sturgis — the biggest festival of its kind in the nation at this point). There were a few familiar faces in the crowd, including Congressman Don Bacon, the Foleys, and the Sanders. There was also one additional speaker — former acting attorney general Matt Whitaker, who served between Sessions and Barr (and got “the biggest applause a Hawkeye’s ever gotten” in Nebraska, according to Ricketts).

A live band played some music after the speakers were done, and while Noem took off right away, Ricketts stayed for an hour longer meeting and greeting just about everybody who came by. Our friends the Mills came by to join us for lunch, and our friends the Halliburtons were there as well, nabbing a photo and an autograph from Noem before she left (of course). It was a beautiful afternoon, so we walked down to the playground for a bit to let the kids play, and we foudn an interesting memorial for J. Sterling Morton next door. It had a pair of statues, one of the Greek goddess Daphne and one of Morton himself, along with a “whispering bench,” designed acoustically so a person talking on one end could be heard in the other.

It was a fun, busy weekend, but not we’ve got to gear up for another one — as somebody will be turning one year older soon (along with her dad).