It’s been a fun, long Halloween weekend — a holiday that I think I’m enjoying more and more as an adult than I did even as a child, partly because I get to live through it again vicariously as a dad. 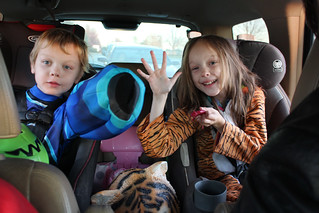 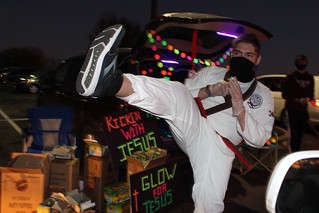 The fun started Friday night as we somehow made it to two trunk-or-treat events. First was at Lifespring, which was a drive-thru trunk-or-treat. It was very slow-going at first, but soon our kids got various candy and treats handed to them by a variety of costumed characters — including the cast of Wizard of Oz, a cow, Thanos, clowns, pirates, astronauts, campers, a karate guy, a donut baker, and even Aaron’s Kindergarten teacher. There were even some Christmas elves at the end to remind us how badly we want 2020 to be over, along with some Bee Keepers to talk about the “Bee Attitudes.” Everything seemed to be very Covid-friendly and socially distant, but it was still a fun little experience, especially for the kids (who made out like bandits). 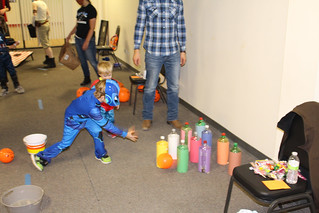 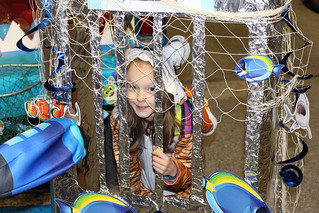 Afterward, we immediately went down to Grace Bible Church at Southroads Mall, which was having its own trunk-or-treat event. Our kids got some candy from a lumberjack, a gumball machine, a fishing hole, and a shark cage.

Then inside, they had hot dogs and chips along with a bunch of carnival-type games for extra candy. We arrived at the tail-end of the event and didn’t get to stay for long, but the kids definitely enjoyed being able to get out of the car and move around a bit to get candy instead of staying strapped in. We even got a family photo before we headed home. 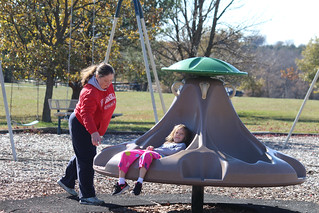 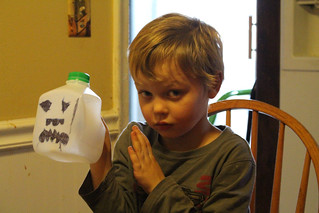 We had some gorgeous weather on Saturday, which Vivian and I thought warranted a trip to the park with the kids. We went all the way to Mahoney State Park, making use of our annual pass before the year ends, and giving them some quality time at the Robert H. Storz Family Children’s Recreational Area. The kids got some quality time on slides and swings, and even mommy took a turn on the springy snail with Aaron.

We took a bit of a break back at the house to make some milk jug Jack-o-Lanterns with the kids. Vivian came up with the idea, and it was certainly less messy than carving an actual pumpkin. The four of us took turns making faces with a Sharpie marker, and then we dropped glow sticks inside each of the lanterns to adorn our front porch. I think they turned out very cute! 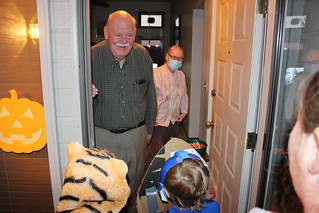 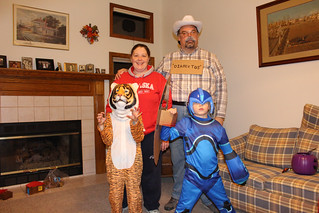 On Halloween night, we all headed out to walk our own streets for a bit for some real trick-or-treating. I also got into the fun this year dressing as the late Wilford Brimley to walk along with the kids, and I also made a special Protoman Shield to go with Aaron’s Mega Man outfit. There were noticeably fewer houses participating this year (because of Covid, I’m sure), but the ones that did seemed to go all out. Our neighbors down the street had a giant block party with decorations all over the place, while another house around the corner had spent five weeks filling its yard with haunted memorabilia — and turning its garage into a walk-through haunted house.

Other folks handed out candy per the norm, such as Betty down the street along with my own parents. Others had “help yourself” bowls of candy out on the front steps, which was what we did as we had no one this year to tend to our door while we were gone. We finished the night at Grammy’s house, and she had bacon of all things ready for the kids when they arrived. Despite the pandemic, it was a fun night, and I even got to share a bit of my childhood with the kids by showing them Garfield’s Halloween Adventure when we returned home.

Election Day is almost here, and this will be my last update until then. I’ll have plenty of thoughts once the election is over — though that may not be for a while, depending on what shenanigans go on with absentee ballots. I do have a few final thoughts before the election, though. Despite all the negativity, anger, and actual civil unrest that has gone along with this year, riding the Trump Train has been a thrill. The crowds only seem to get bigger every time President Trump comes to town, and the atmosphere is more like a football or a rock concert than a campaign rally. I got to hang around plenty of Democrats during these past two years as well, and one thing I’ve learned is that the anger each side hast toward the other is based on the misconception that Americans who disagree intend to do each other harm. While there are genuinely bad people out there, just about everyone only want to live their lives in the best way possible, and they vote for whichever side they thing will make that happen.

I’m voting for President Trump, but I pledge that I’ll remain friends with anyone who doesn’t. And even though I’ll be disappointed if Biden wins on Tuesday, I’m still happy I got to meet him twice. Being able to shake the hand of anyone seeking the highest office in the hand is a unique privilege, and I look forward to taking that journey again when the next election season starts (which I believe is going to be on Wednesday).