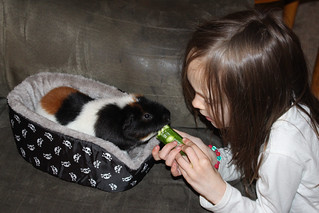 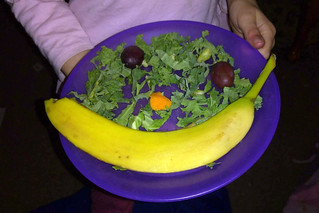 We had a couple of birthdays in the Johnson household this week. First up was our guinea pig Harold, who surprised our friends the Mills by popping out of his mommy’s tummy one year ago Monday. Hannah made him a plate of his favorite foods arranged in a smiley face for breakfast that morning, and then that evening I had some cilantro and baby cucumbers for him to much inside of a new, snuggly guinea pig bed I picked up from PetCo. I’ve had four guinea pigs growing up, but I never actually knew any of their actual birthdays, so this was a special day!

In the meantime, Aaron got to bake some cookies he prepared at church during Sunday School. Hopefully the ones he’s saving for Uncle Jonny and August make their way over before they go stale. 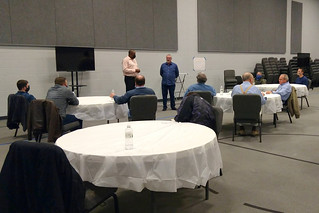 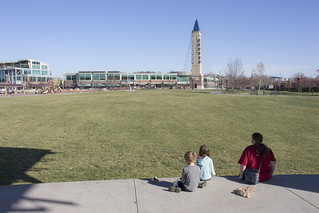 On Tuesday, I joined the Men of God group at Wildewood for a barbecue dinner — the first time I’d attended since before the pandemic. Our guest for the evening was Charles Wilson from the Omaha Street School, and he shared his story growing up and getting into trouble in college before coming to Omaha to attend Grace University.

We also enjoyed some lovely weather later in the week and decided to take the kids down to Stinson Park. Even though we’d visited several other parks throughout the year, we hadn’t been to “Daddy Park” since way back in March, so it felt good to be back. The kids got to have some quality time running around and playing on the swings. Temperatures were around 70, so we didn’t even need coats. It felt good to get outside for some fresh air, and Aaron even lay down to watch some of the airplanes leave trails in the sky overhead. 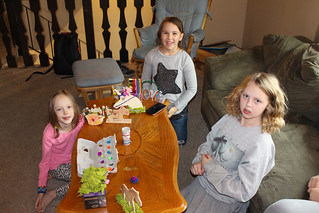 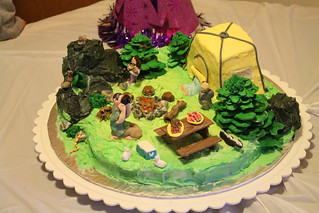 Then over the weekend came Hannah’s birthday (shortly after a few birthdays for her dolls). We had a little party for her and a few of her little friends at our house on Saturday. Sammy and “Other” Hannah came over and made a variety of crafts on our dining room table in the afternoon. Donna brought over a Camping Cake featuring the four of us together (and me taking photos of the food), filled with lemon, strawberry, and chocolate cakes.

Hannah opened a few presents from her friends in the living room afterward before blowing out her candles (on a makeshift “nine“), and everybody had fun eating the little miniature fondant sculptures on Grammy’s cake, which included a butterfly, a bunny, a squirrel, a picnic table, hot dogs and hamburgers, and all of us, of course. 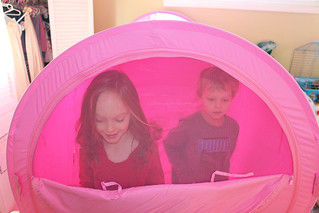 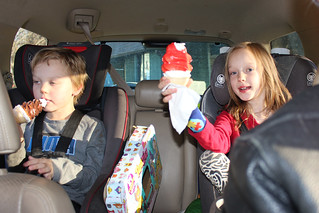 Hannah actual birthday happened on Sunday, so we got up early for a breakfast of bacon and donuts together before opening some presents. Grammy got Hannah a “bed tent,” which I immediately helped set up for her and Aaron to play in. She got a handful of other presents from mommy and me, including potato chips and Hatchimals. Aaron also had some gifts he picked out, along with a birthday card decorated with the Pokémon Cinderace, which is apparently the final form of Hannah’s favorite Pokémon Scorbunny.

We dropped by Grandma and Grandpa’s house in the afternoon so Hannah could opened a few more presents, including a giant 24-piece set of “Twosie” characters, as well as a plush Scorbunny from Uncle Jonny, which immediately became Hannah’s favorite gift. We went by Dairy Twist for some ice cream afterward, and then settled the kids down watching Finding Nemo while eating (ironically enough) shrimp for dinner to finish off the day.

I think Hannah had a very happy birthday, but we barely had time to catch our breath, as Thanksgiving is right around the corner. (And that meant rushing to buy a turkey in time to thaw!)