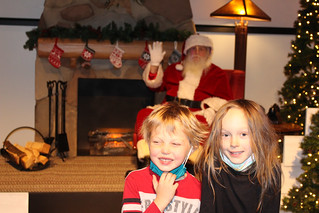 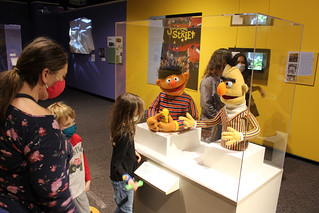 One of our annual Christmas traditions is a visit to Union Station downtown, which we did again this year — pandemic or no pandemic! We got a lovely family photo in front of the tree and got to walk through a train car and a streetcar down in the basement, just like always. Santa was on-hand to hear the kids’ Christmas wishes as well, though he had to stay several feet away and take their requests via telephone (though we did get a photo).

The highlight of our trip was the Jim Henson exhibit, which featured several very original Muppet characters on display, including Bert and Ernie, Fraggles Red and Wembley from Fraggle Rock, Bunsen and Beaker, as well as Gelflings and Mother Aughra from the Dark Crystal and even coffee commercial mascots Wilkins and Wontkins. There were some interactive activities as well — Hannah and Aaron got to assemble features on a “fat blue” Anything Muppet, and they also got to perform with a Muppet in front of a TV camera in a recording booth.

We finished off our visit with a few “phosphates” at the soda fountain before heading home. 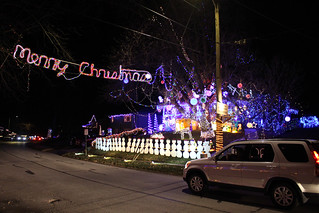 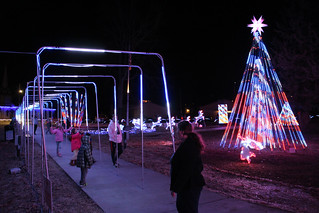 I got some chores done over the following week, cleaning out the garage and unearthing treasures such as my old Game Boy (which I let Aaron try out). Our friend Scott also stopped by and helped replace the latch on our stove.

We also had some fun looking at Christmas lights with the kids. On Tuesday, we took them down Larimore Avenue to see some houses adorned with enough lights to make Clark Griswold proud (one with a Family Truckster on the roof). We also stopped by Wood River Drive, but once again missed seeing Santa.

Then on Thursday, we had some homemade Nacho Navidad (and Christmas cookies from out neighbor Betty) and then took advantage of the unseasonably warm weather to stroll around Washington Park in Bellevue. The park was filled once again with multiple light displays, all animated and timed with music that played overhead. The kids had some fun walking around the displays with us, particularly Aaron, who seemed to feel like he was inside a giant video game.

We’ll be having some more Christmas fun happening in the weeks ahead. I just hope I’ll have time to get all my shopping done.