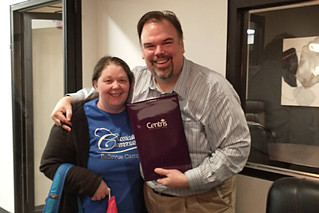 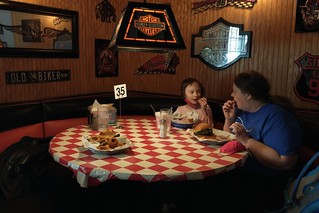 I was able to check a major item off our to-do list last Thursday when Vivian and I finally closed on refinancing our mortgage, taking advantage of some record low interest rates, going from 4.125% to 2.75%, knocking out PMI and nearly five years off our loan in the process (and somehow paying less per month).

Vivian had Hannah along, and we all went out to Fuddruckers afterward to celebrate, a restaurant I hadn’t eaten at in over a decade. Because of Covid, their famous toppings bar was closed, so eating there was much more like a Five Guys than the Fuddruckers I remember. As such, I got a ribeye sandwich instead of a burger, which was quite tasty with mushrooms. 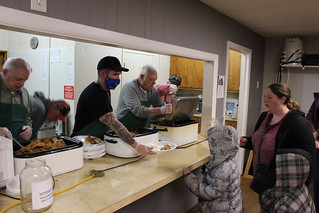 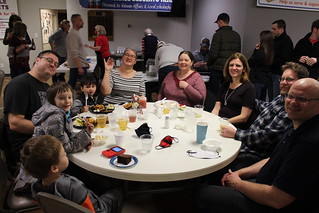 On Friday, we were able to attend a real, live, sit-down and dine-in Fish Fry way out in Gretna, just in time for their mask mandate to expire. We shared a table with a handful of our friends and had some fried fish with coleslaw, beans, and macaroni and cheese courtesy of the American Legion Post 216. A handful of our friends joined us, including (eventually) Phil and Jen and their son Gabriel, who we hadn’t seen since the last in-person fish fry we’d attended, pre-pandemic.

Aaron made himself a bean sandwich, and we kept the kids busy with a video game and my phone, which Hannah used to take photos and videos of our table. We also let them have a few treats from the dessert table to get properly sugared up before heading home. 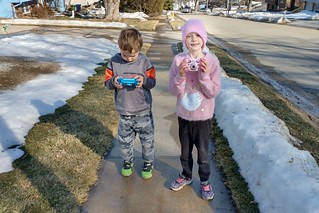 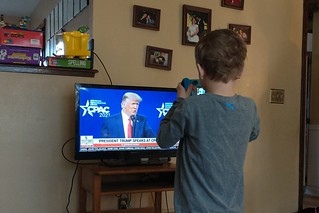 The weekend itself was fairly quiet. It was warm enough outside to nearly vaporize our snowman, so I decided to take the kids on a walk over to Grandma and Grandpa’s house. I’d finally put some batteries and memory cards in the kids’ digital cameras, which kept them occupied taking pictures and videos throughout much of the day.

On Sunday, Vivian made some bean soup or lunch, and then I broke open a can of Goya coconut water and tuned in to President Trump’s speech at CPAC. There’s something unforgettable about the energy of a Trump rally — not just from Trump himself but from the crowd, which can interact directly with him in completely spontaneous chants of “We love you!” As irritating as it is to see one election leading right into another, it was oddly thrilling to feel that vibe once again.