We’re still in the reign of the White Witch for the past week or two, with temperatures in single digits and us making the most of the Great Indoors when we’re not venturing out for a Bible Study or something. Hannah’s made some balloon friends, and daddy’s made some more popovers (which go great with avocado, strangely enough). 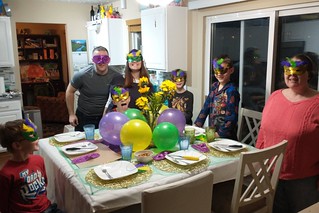 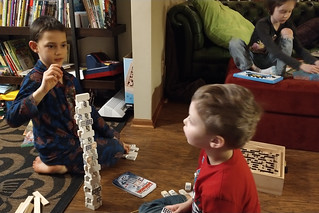 On Saturday night, the Mathis family invited us over for dinner. We had some corned beef and broccoli along with some Valentine sugar cookies we brought. Emmett has been celebrating Mardi Gras early with masks and a table decoration with appropriately colored balloons. After dinner, we played a memory game called Say the Word, which was very much like the “picnic game” (which Aaron has enjoyed playing at grandma and grandpa’s house). Our kids mostly enjoyed a kind of playdate afterward playing with dominos, and Hannah made a picture of a bear with some tiles.

It was around zero degrees when we left and found the car had a nearly-flat tire. Fortunately, the Mathises had an electric pump I was able to use to fill it back up. 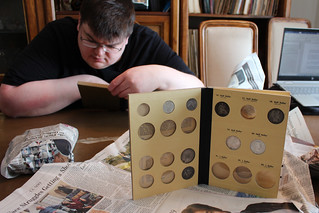 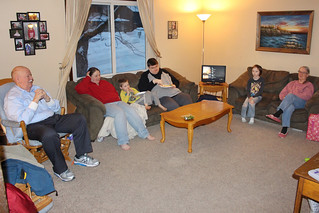 We went to church the next day, and Aaron and his Sunday school class had fruity treats for everyone as we came out of the service. I spent some time during the afternoon going through another one of my dad’s trunks, this one containing some old coins and stamps collected by my grandmother, as well as some odd currency sent to my dad by a friend (including a paper Shekel and a gag seven dollar bill with Jesus on it).

That evening was the Super Bowl, so I headed home and helped Vivian put our a spread of food for us to watch the game. My parents and Uncle Jonny came over to watch the Buccaneers roll over the Chiefs, and even Harold came out of his came to watch with us (and munch some salad). Hannah kept herself busy making little hors d’oeuvres for us with the crackers, chips, and dip we’d had set out.

It was a fun weekend, but I’m looking forward to some warmer days ahead. In the meantime, we have a tire to fix.