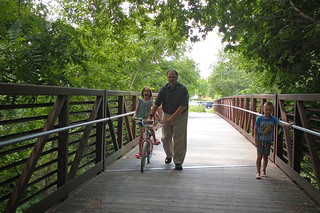 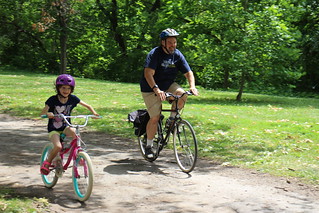 It was an exciting week as Hannah got her very first bike — one she learned to ride almost immediately without training wheels. We bought it used in northwest Omaha and then dropped by Bridlewood Park so she could try it out for a bit. Then that evening, she she quickly got the hang of riding it in our own driveway! The next day, we went to Elmwood Park for the Omaha Homeschool picnic, and Hannah and I got to ride together on a few of the paths there and go exploring all the way up to Dodge Street (in-between hot dogs). I was amazed at how quickly she picked it up. She’s a natural! 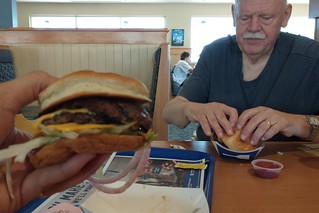 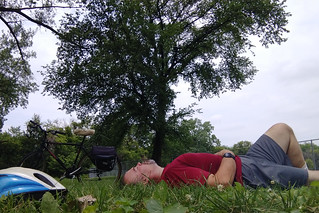 I’ve been busy riding my own bike almost every day, of course, taking it all the way back to Bellevue to have burgers with my dad at Culver’s over a lunch break.

I also rode it all the way from work to home and back — doorstep to doorstep — without a car in-between, just to say I could. If my car ever needs work done on it again, I won’t have to hitch a ride to get to the office. Mostly, it’s been a great way to get out of the office during the day and enjoy some fresh air — even if I have to time my rides between passing thunderstorms. 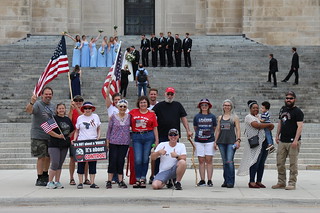 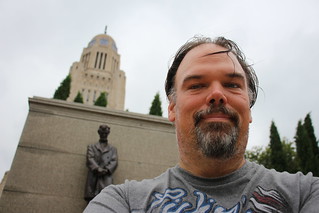 Then on Saturday, I took a trip down to Lincoln for a Freedom Rally on the steps of the state capitol. My friend Tim had been holding them since the election, so I dropped by to join a few patriotic folks waving flags for an hour or two. It was an interesting group of conservative outsiders from groups with speakers such as Patrick Peterson of the Nebraska Freedom Coalition, Jennifer Hicks from Nebraskans Against Government Overreach, and former Omaha City Council candidate Tyeisha Kosmicki. Tim seemed to expect counter-protestors, but the only one who showed up was a guy who circled the capitol there times to yell obscenities. Mostly there were just happy honks from passing cars and even a few passersby who stopped to listen. We did get photobombed by a wedding, one of at least three that seemed to be happening around the capitol that day. Then a guy from KLKN-8 came by to have a few words with us before we wrapped up.

I grabbed some pho on the way home to have for dinner, and then that evening Harold’s mommy came to pay us a visit as the Mills went on a trip for a week. I also broke out the dragon fruit I got at Trader Joe’s for the kids to try. We even gave Harold some, which left it with some strange purple lipstick.

Next stop, Shakespeare — by any greens necessary!