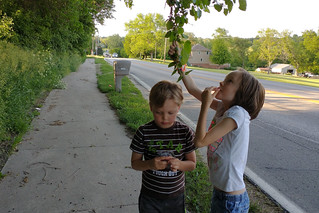 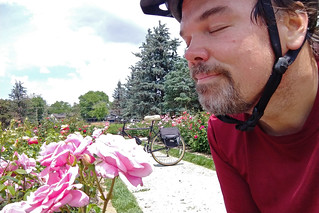 Summer is here, and that means the mulberries are in full bloom. I took the kids for a walk down 25th Street just to pick up a couple, where several trees seem to be littering their wares all over the sidewalk. Vivian also finally broke out the pool on Wednesday so the kids could cool down a bit, as the temperatures push into the 90s and beyond.

That still hasn’t stopped me from having a few beautiful morning walks, whether to Chick-Fil-A or an old country road just to watch the sunrise. I’ve also been using my bike nearly every day, pedaling by Arby’s for a free lunch (using four-year old coupons that apparently don’t expire) or up to Memorial Park just to stop and smell the roses. I’ve got to keep it up if I want to burn off things like the cheesesteak Runzas I somehow convinced Vivian to make (from a “recipe” consisting entirely of blurry photos on Facebook). 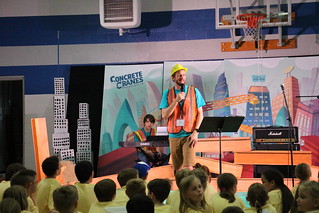 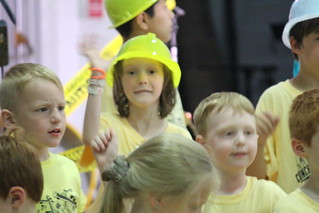 Hannah’s been attending First City Church’s VBS (“Concrete and Cranes”) down in La Platte. It was held in the old high school next to a few even older buildings, relics from a time when La Platte was a legit town generations ago. A bunch of kids from our area, including the Mills, have been attending the VBS week, and the kids all put on a little performance for the grown-ups on Friday morning, who were invited as a surprise. I had the day off, so I got to go as well, and they even gave us a sack lunch afterward. We were supposed to have a picnic, but a thundershower happened to be rolling through Omaha at the moment and put an end to that. 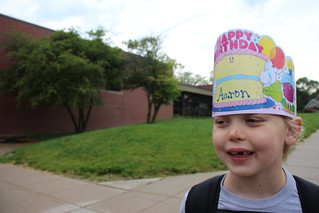 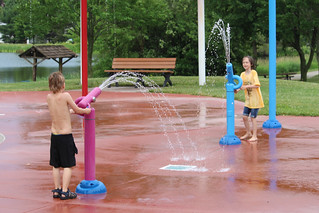 Aaron’s birthday was also on Friday, so we picked him up early from a half-day at summer school, where he got a paper crown to celebrate the day. We dropped by Schwer Park to check out their splash pad as a possible spot for Aaron’s party the next day, and we wound up staying for an hour or two. Because of the rain and the weekday, we had the entire place to ourselves, so Hannah and Aaron (and even Daddy) got to run around and get thoroughly soaked — even though we hadn’t brought our swimsuit!

It turned out to be a lovely little park, with a pretty lake and a small, sandy playground in addition to the splash pad. Most important, though, it had those “buckets” that Aaron loves to get dunked underneath, so it seemed like a no-brained destination for a party. 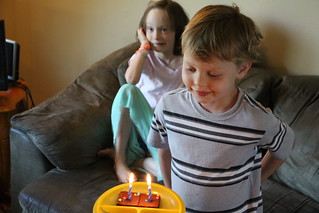 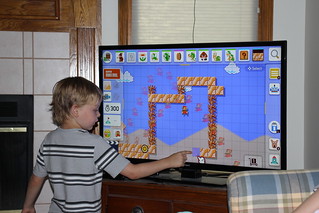 We celebrated Aaron’s birthday that evening with visits from all four grandparents. Grammy and Pop-Pop came by with some presents, which included some Mario stickers for Aaron to decorate his room. We had some burritos for dinner (at Aaron’s request) and then had him blow out candles on a pair of brownies Donna brought by for a “cake.”

After dinner, we dropped by my parents’ place to continue celebrating. They got Aaron some paper and dice to make his own board games, Uncle Jonny gave him a Mega Man board game, and Uncle Nathan gave him a Dr. Wily action figure. Mommy and I also had a few presents, including a pair of dart guns and a plush “Magolor” from Aaron’s current video game. After the presents, Aaron got to play Mario Maker with Uncle Jonny for an hour, dictating a level design with him — something he’s wanted to do pretty much every time we’ve visited for the last year or two. 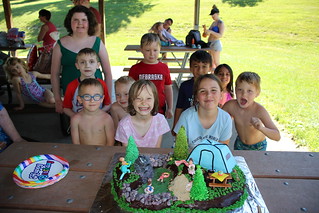 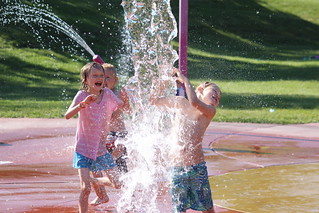 The next day, we returned to Schwer Park for the afternoon, where Aaron got to have several hours to run around getting wet with a bunch of his friends. We got there early enough to claim a few tables for ourselves, and Aaron wore himself out running from one end of the park to the other, chasing after his little friends and then getting dunked repeatedly with the “buckets” at the end of the afternoon (and even Mommy and I wound up joining in).

Hannah picked a few mulberries with Sammy to tide her over until Grammy before the cake. She made a giant camping cake, which was all chocolate except for the tent, which was blueberry. It featured a little fondant Aaron fighting a “tree boss” and a “rock boss” with several other people and a gelatin lake. A few nesting birds kept us company in the pavilion before we left for the evening. We got some burgers at McDonald’s on the way home, and Aaron crashed pretty much immediately afterward. 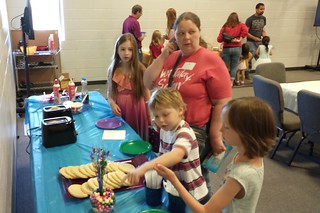 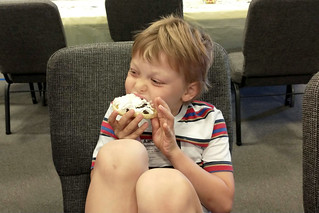 We managed to make it back to church bright and early the next morning. They had some waffles for the Wildewood parents in the multi-purpose, so we got to visit with a few oft he grown-ups as Hannah and Aaron got properly sugared up before we headed home. 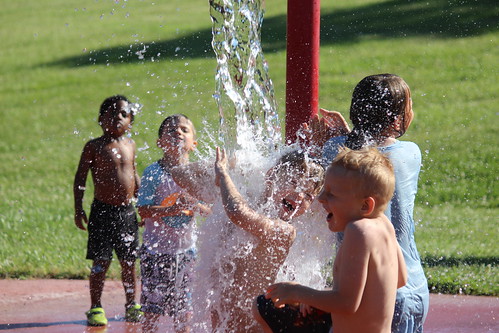