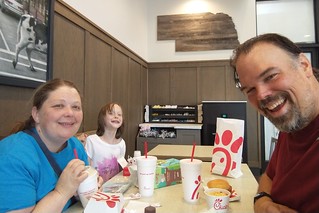 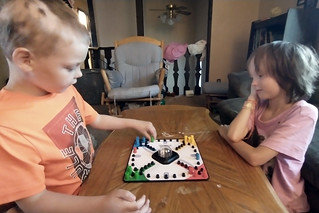 It’s been a hot week leading up to Father’s Day, with temperatures hitting 102°F on Thursday. Of course, that didn’t keep me from biking on down to Chick-Fil-A to have some lunch with Hannah and Vivian when they stopped by. I’ve been biking nearly every day, finding new places to explore along the trails in Omaha. I’ve also been taking more walks — both with Hannah to Chick-Fil-A and by myself in the early morning before it gets too hot. It’s a quiet, beautiful world before the sun rises.

The kids have been having some quality time indoors as well. They’ve both had some fun playing Trouble with me in the morning before I leave for work, and both Hannah and Aaron have been learning how to play Uno. We love video games, but nothing can replace the good old analog kind. 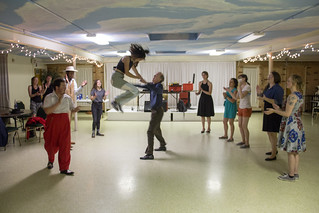 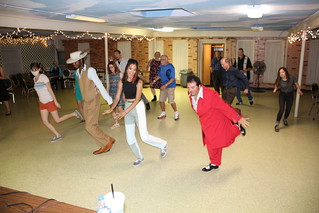 On Friday, I decided to take a trip to the Starlight Chateau to encounter Jordan and Jared and their “Speakeasy” swing dance. Back when Covid shut everything down, they decided to start their own covert swing dance in the basement of the old St. Clare’s Monastery. Now that JNO has started up again, they’ve mostly retired the venue, but they put on a dance one more time on Friday when the power went out at the Eagle’s Lodge. That meant old-timers like Dan Wondra and me decided to show up for a little old school swing dancing.

It was a fun venue all its own, and their DJ played actual vinyl records on turntables rather than MP3s on an iPod. They had all the JNO staples, such as a birthday jam, a shim sham, and a jam circles, but they also played actual neo-swing music (specifically Zoot Suit Riot), which immediately got me on the floor. 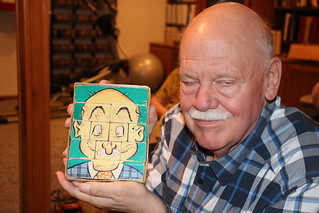 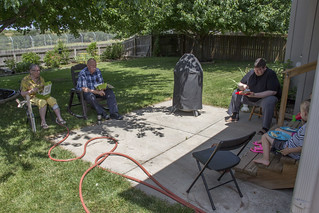 On Saturday, I celebrated a bit of Father’s Day with my dad, bringing the kids over to look in his old toy chest. They got see his old Howdy Doody marionette and play with a “Changeable Charlie” game — which Hannah used to make a portrait of my dad. We also found some old Father’s Day gifts and an art project or two that my dad had stored away. The kids seemed only mildly interested, wanting instead to get in a workout on the elliptical machine.

We got some lunch from Taco John’s afterward, and then dad opened a few presents inside. I gave him a copy of Andy Ngo’s new book, as well as a “Le Tooter,” which Leslie Nielsen famously used on the Conan O’Brien show to make fart noises. Great minds must like alike, because Uncle Jonny gave him the same thing — four of them, in fact — so now we can have the whole family making covert flatulent noises together. Quality time. 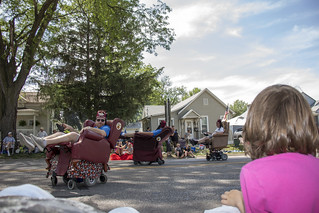 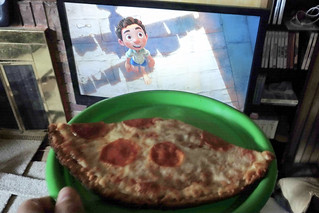 Then in the afternoon, I took Hannah down to the Papillion Days Parade to enjoy our first parade since well before the pandemic started. We got to see an assortment of Shriners, tractors, marching bands, and costumed characters. Hannah was a bit disappointed in the lack of candy, but she got a nice little Hippo plushie from a princess passing by, as well as a gift card for a free kid’s meal at Chick-Fil-A (which we’ll certainly walk down to use sometime). We stopped for ice cream at Dairy Queen afterward and got to watch a helicopter giving rides by Halleck Park for ab it before returning home.

Then I went by Aldi for some groceries and a pizza or two, which we ate while watching Pixar’s Luna, which I discovered was available for free on Disney+. Family movie nights with pizza are quickly becoming a family tradition in our household. 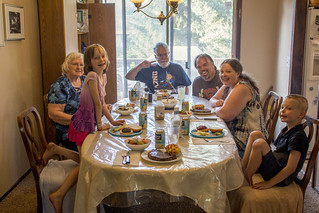 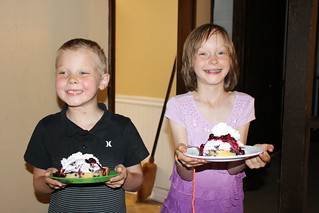 Then came Father’s Day! Vivian made me a tasty breakfast burrito for breakfast, and the kids had a pair of adorable handmade cards that they gave to me before we got ready for church. Then that afternoon Jack and Donna came by with some hors d’oeuvres and some things for dinner. Vivian fried up a couple ribeye steaks for us, as well as some shrimp, and Donna put together some loaded twice-baked potatoes. We all ate together as a family before going back to open presents. Vivian had a few new T-shirts for me, as well as some barbecue sauces and tortillas made from almond flour and cauliflower.

After presents, Donna broke out the dessert, which was blueberry cake (leftover from Aaron’s birthday) topped with blueberry cheesecake ice cream, mixed berries, and whipped cream. The kids helped put them together, which was also part of the fun. 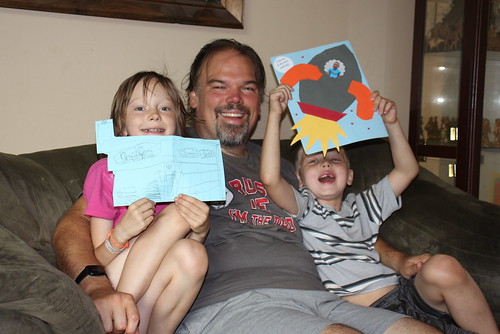