Happy Independence Day, everybody! We had a long weekend packed with events to help celebrate America’s birthday. which meant food, fireworks, and fun with friends and family all weekend long. 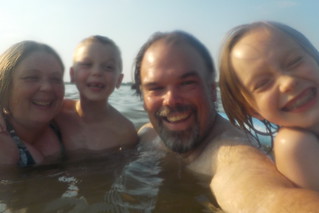 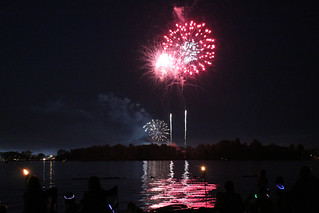 We kicked things off on Friday night by taking the kids down to Lake Manawa for a couple hours of swimming. The kids brought along a couple pool noodles and had some fun getting wet and splashing mommy and me as the sun slowly went down. We brought along a few snacks, including some cape gooseberries I got from Trader Joe’s, and I even grabbed a bunch of funnel cake fries from the concession stand, where our friend Jolene was working (and selling her mulberry jam).

They lit some tiki torches once it got dark, and then at ten o’clock they lit up the sky with a twenty minute firework show for us. It was doubly impressive with the reflection from the lake, of course, and there were so many fireworks set off independently that it was hard to tell when the show actually started (though the coordinated music on 101.9 The Keg helped). 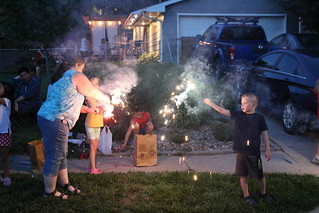 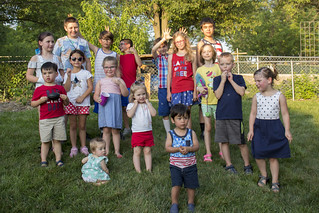 The next morning, I got up early for a run and then went to have a pancake breakfast with my folks down at Converge Church.

Then that evening, we gathered with a bunch of our old friends at Jenny and Kody’s house. We hadn’t seen some of these folks in years, and half of them seemed to have kids growing up right before our eyes. We got our fill of party food for the evening, including an American Flag veggie tray made by Vivian, and once the sun went down, we set off a bunch of fireworks in the streets with the kids. 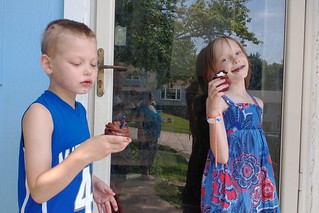 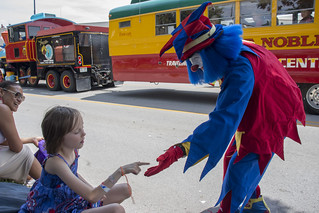 The next morning, I dropped by the Ralston Parade Route to set down a blanket before we got dressed in our best reds, whites, and blues to go to church on the Fourth of July. Grammy dropped by our house with some star-spangled cupcakes afterward, and I dropped by Walmart with Hannah to get some ice cream treats for tonight.

Then Hannah and I went down to Ralston to see the Independence Day Parade for the first time in a couple years. We got to see the usual batch of politicians — Don Bacon, Pete Ricketts, and Jean Stothert all showing up, as well as gubernatorial candidates Herbster, Pillen, and Lindstrom. Hannah got her fill of candy from passersby, including the parish of our friend Father Marcus. There were also Shriners, clowns, and a few American cosplayers in the crowd, but not as many float as one might expect. 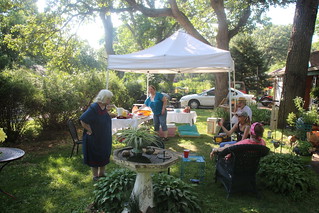 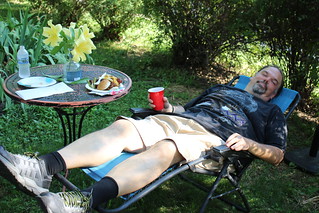 Then that evening, we were just wondering what to do for dinner when Grammy called and said her neighbor Toni needed help eating a bunch of Fourth of July food she and her husband Tom had made for guests who somehow didn’t show up. We were more than happy to oblige, showing up with the kids to have some smoked brats, ribs, and pulled pork hot off the smoker in their shady front yard. The kids particularly like the rope swing and the play structure (AKA “tree house,” sans tree), while I enjoyed being made in the shade in a reclining lawn chair. 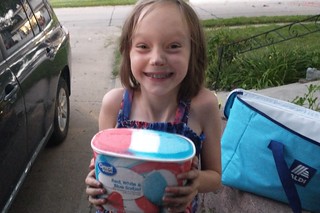 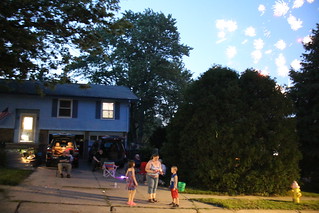 Then once it started getting dark, we returned to our house to set off some fireworks in our driveway — and apparently the entire neighborhood. I served up ice cream bars and sorbet to all four of our grandparents (and Uncle Jonny), and we all watched as Vivian lit some fountains, sparklers, and artillery shells in the street.

Our neighbors also ignored their own fair share of explosives, including a couple dozen artillery shells all at once as their “grand finale.” It was an explosive end to a weekend that felt very much like a war zone, but a heck of a lot more fun. 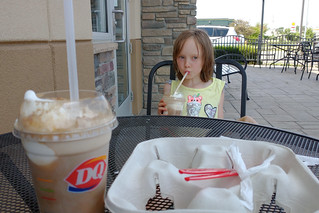 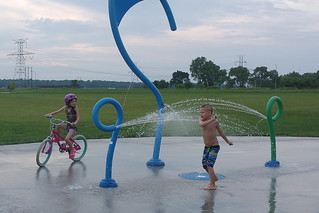 We spent most of Monday recovering of all the fun we had. Hannah and I went on a lovely bike ride through a shady trail in Ralston, going past the old United Seeds grain bin, and then we went on got root beer floats at Dairy Queen. Afterward, we spent some extra quality time with Harold’s mommy Ginny before she had to go home with the Mills.

We had some more fun on Tuesday when I met up with Vivian and the kids at Banner Park after work. We got a little wet together in the spray round, which was lovely after a hot bike ride, and then we had some pizza before trying out a set of Stomp Rockets Vivian got a year or two ago. Then I biked with Hannah on back to my car at Culver’s with Hannah and got her a sundae before returning home.