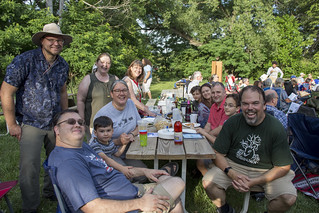 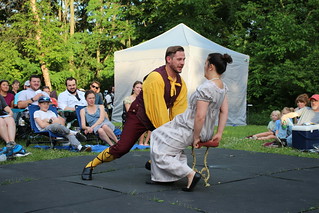 When Shakespeare on the Green was cancelled for a second year in a row, I thought for sure we wouldn’t be able to enjoy a live performance of the Bard’s this year. Wrong! I stumbled upon the Flatwater Shakespeare Company in Lincoln, who were performing Twelfth Night at James Arthur Vineyard of all place — in a setting very much like the one we were used to in Elmwood Park. Joining us were Phil and Jen, Randy and Jolene (and their kids), Jon Paper, and Lisa Barrett. The play was performed “in the round” in the picnic area of JAV, and we were even able to claim a table for our guests and vittles (including homemade hummus and jam).

The show itself was quite good — played “straight” unlike the modern, musical version we saw together some eight years earlier. They didn’t have the same budget for sets and sound equipment as Nebraska Shakespeare, but we were all able to enjoy the play from every angle together. Maybe we’ll do it again next year! 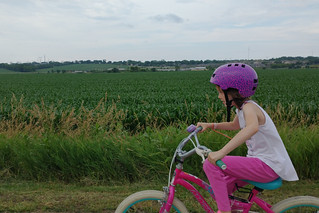 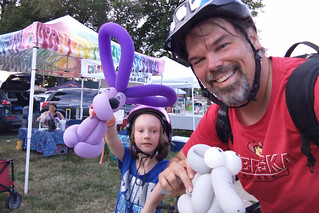 On Monday evening, I decided to go on a biking adventure with Hannah. We started at Culver’s and rode about a mile up the Keystone Trail to Banner Park and back — enjoying cornfields and 72° weather for an hour or two. Then we had ice cream sundaes at the end to celebrate our trip.

Then on Wednesday, Hannah and I took a much longer ride together — starting at the same spot but going nine miles west to Papillion and back on the West Papio trail. We went all the way through downtown, going under Washington Street (and by a small waterfall) and then over it via the pedestrian bridge. Hannah showed me some milkweed along the way, which she learned from her American Heritage Girls’ group has a milky substance on the inside (hence its name). We also passed through a carnival of sorts, where we got some nice animal balloons from one of the vendors as she was closing up shop for the day! We managed to carry them all the way home as the sun set behind us, though we had to take a quick trip past Halleck Park to see the fountains before we headed home. 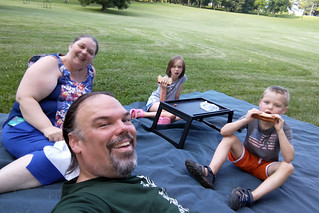 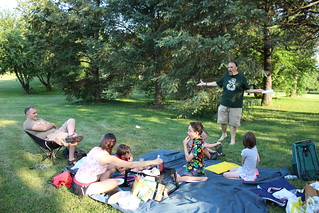 Then on Thursday, we had our “Shakespeare on the Other Green” down at Memorial Park — which was really more of a picnic — in recognition of the evening Shakespeare on the Green should have had its opening night. The Mathis family joined us on our blanket out on the giant west lawn, and we had some wine and cheese together, along with some mulberry jam brought by Jolene.

I read a few pieces of Hamlet, Julius Caesar, and A Midsummer Night’s Dream before letting the kids run around and play on the playground for a bit. It was a beautiful evening for a picnic, with or without Shakespeare, and Memorial Park was certainly a nice place for the kids to run and explore, at least before we come back with a crowd to see Elvis Costello and Wyclef Jean, who will perform here in August. (Stay tuned for that later.)