School is about to start again, which means we had to have a little more fun getting wet before summer vacation draws to a close. 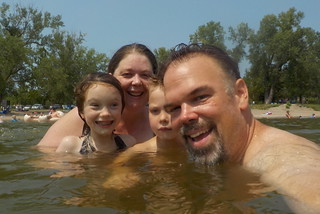 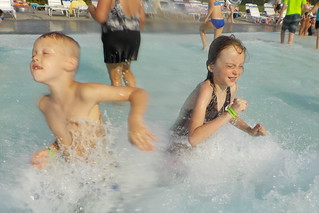 I took Wednesday off specifically so we could all head down to Mahoney State Park’s aquatic center for a long, uninterrupted day of fun in the sun starting at noon. Unfortunately, they seemed to be closed until 4 PM, despite what they said on their website, so after a brief trip up and down the observation tower, we headed down the road to Louisville Lake to splash about for a couple hours instead. After that, we grabbed some ice cream cones down at the “Dari Cream” in town before heading back across I-80 to the aquatic center once they opened.

We weren’t the only ones there, of course, and the line to get inside was massive, but we had plenty of time to get wet in the play area, go down the waterslides with the kids, and get violently knocked about in the wave pool before closing time. Hannah in particular seemed eager to go underwater and see how well she could actually “swim” in all that chaos. Then we grabbed some Taco Bell on the way home before collapsing in bed. 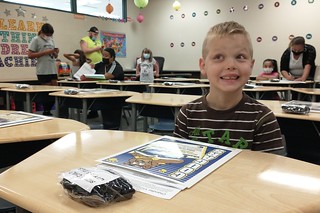 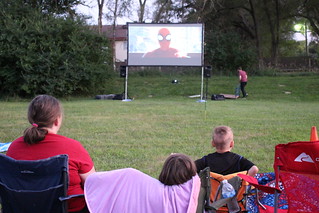 The next day, we had an Open House at Chandler Elementary, where we got to meet Aaron’s new teacher and see his new classroom. We got to see that Aaron’s best friend from “Nico” from Kindergarten will also be in his new First Grade class, which was wonderful. We also got to show Mrs. Smith the workbook Aaron was able to complete over the summer for a special certificate. Then we headed home to have burgers with a few of our garden tomatoes for dinner.

The next day, I went with my parents for a little end-of-year cookout at their church. We had some hot dogs and chatted with them about family and bike-riding, among other things. In the meantime, Vivian took the kids down to BCC for an outdoor movie night (Into the Spiderverse — again), where I joined them after dinner along with Gabriel and August, who came by right before the movie started. 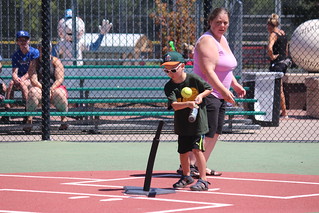 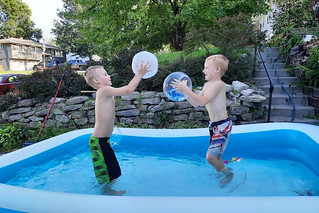 On Saturday, Aaron had another tee-ball game down at Seymour Smith Park with his little friends. Once it was over, Hannah and I went on a quick bike ride up and down the Keystone Trail before having some ice cream and getting a bit wet in the spray ground before heading home.

Then that evening Vivian had a reunion with her friends from Friendship Program as I took Hannah and Aaron over to the Mills’ house for dinner. Hannah and Sammy got to play dolls while Aaron ran around with Gabe and August, getting wet in the pool and chasing chickens in the backyard. Hannah even got to help clip some of the chickens’ wings while she was there. 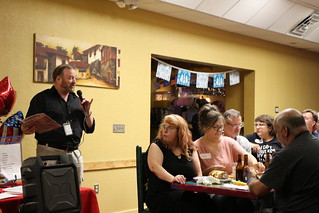 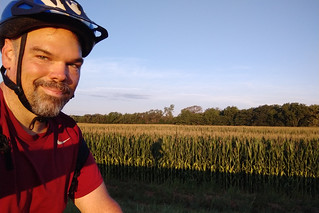 I’ve been keeping busy with other things on my own in the meantime. I got to see Gubernatorial candidate Michael Connely at the Bellevue La Mesa on Monday last week. A couple dozen folks came to have Mexican food and then listen to over two-hours of stories about everything from Japanese hydrogen plants, fixing helicopters, to Romanian eyeteeth.

I’ve also been getting in as much time on my bike as possible, heading by President Ford’s birthplace and stalking some corn down in Papillion on different days. I also managed to get a couple blown tubes, which I hope will be mostly fixed with a new Kevlar tires that I got on Friday.

In the meantime, we’re bracing for another school year, and hoping we can still enjoy a few more moments of summer before the leaves start changing color.